Unity Pid With Rigidbodies by robertcorponoi - 1

The example project that goes along with the article at https://robertcorponoi.com/rotating-rigidbodies-with-pid-controllers/

A demo repository for an article on rotating Rigidbodies with PID controllers.

The contents of this README are the same as the article on my website. If you came from the website, you can just download or clone the repo and open the project in Unity to see the demo.

What is a PID controller?

The inspiration for this article came about when I was doing research on the best ways to rotate a Rigidbody and I stumbled upon a forum post that mentioned using a PID controller. The person also linked an example project which most of the code below is based off of and after I saw what it did I decided to learn more about PID controllers myself and eventually I decided to write this article to help the next person that stumbles upon this same scenario that wants a detail explanation and guide.

I’d highly recommend checking out the above linked forum post but I’m going to go over the code and expand on it a bit and an even more complex example can be seen in this repo.

Now for a quick overview of PID controllers:

To set up the project for this article we’re going to create a new 3D game add a spaceship model I got from a Kenney kit. Next we add a Rigidbody to the model which we’ll apply the torque to.

Now we need to create two scripts: PID and ShipController. The PID script is where we’re going to put all of the logic while the ShipController is going to use the values output by the PID controller to rotate the ship.

Let’s open up the PID script and create the controller.

In the PID script we don’t need to do anything on Start or Update so we can just delete those and we should be left with the following:

The first thing we want to set up are the properties we need:

Believe it or not we’re almost done with our simple PID controller here. We just need to create the method that takes in the current error and calculates the output which we pass to AddTorque in the ShipController script.

And that’s it for our PID class. If you’re still a bit confused don’t worry we still have example to get to. Also don’t expect to fully understand PID controllers from this tutorial, but instead you should understand how to use them for tasks such as rotating Rigidbodies. If you really want to learn more about PID controllers there are great videos on the topic that helped me grasp the concept.

Next we’re going to make the script that gets attached to our ship and controls the Rigidbody using the PID output but before that we should attach our PID script to the ship.

So back out in the inspector we click on our ship game object and drag over the PID script twice. You read it right we need two instances of the PID class because we want to control the angle of the Rigidbody but also the angular velocity so that we can avoid abrupt changes to the angular velocity when applying the torque to change the angle.

This is also where the Name property in the PID script comes in handy. We can better distinguish them by naming the first one “Angle Controller” and the second one “Angular Velocity Controller”.

We’re going to leave the public variables alone for now until we set up our ship and have a working demo.

Now to test our PID script we have to actually use it to change our ship’s rotation.

Same as before, open up the ShipController script and delete the Start and Update methods since we won’t be using them and make sure you just have the following:

First things we want to do here is set up the variables we’ll need:

When the ship is initialized we:

Now it’s time for the fun stuff, the actual rotation and usage of the PID controllers. In the FixedUpdate we:

At this point you should add the ShipController script to the Ship GameObject and your ship should look something like this in the inspector: 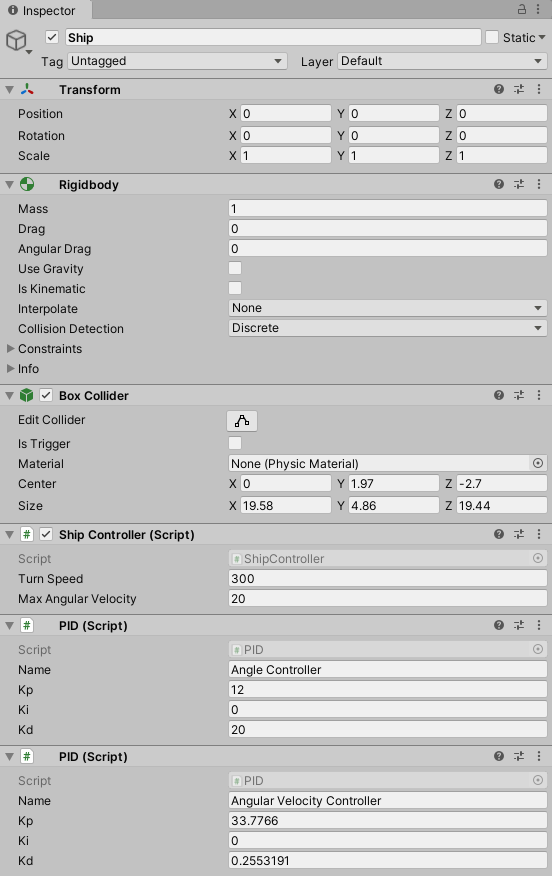 Now we have to go back to the inspector and fill out the gains for both PID controllers. This can be done by running the scene and tweaking the values until you find a nice combination or you can use a set of values below highlighted by the forum poster:

These gain values result in a control system that’s critically damped, or at least very close to it. This means that there is the smallest amount of oscillation, which is probably not even noticable. So in our example that means that when the ship is turned, it will stay where it is.

These gain values result in a control system that has fast controls meaning that the turning is very responsive and quick in comparison to other gain values.

These gain values result in a control system that has slow, less responsive controls.

These gain values result in a control system that has springy controls so when you turn the ship you’ll notice that it overshoots the target angle and bounces back to the correct angle.

All that’s left now is to play the scene and try turning the ship with the left/right arrow keys and seeing it in action. Feel free to try out different combinations of PID values while the game is running to find the perfect combination for you.

Also check out the example in the repo for a more complex demo.

Show all projects by robertcorponoi