This is a reeeeeeeeally basic first-person character controller that can simply move, turn around, and look around. It has support for “two” control schemes: keyboard & mouse, and gamepad.

Because “gamepad” is generic, this technically works for Xbox, Playstation and Nintendo Switch without general modification anyway (you would still have to do controller detection in those platforms SDKs when relevant but that’s beyond scope of this demo). It’s good practice to make specific control schemes for those platforms when possible - this demo does not do that, and instead sticks to the generic gamepad.

This demo is built to showcase the workflow of the new Unity Input System, specifically its Player Input component. 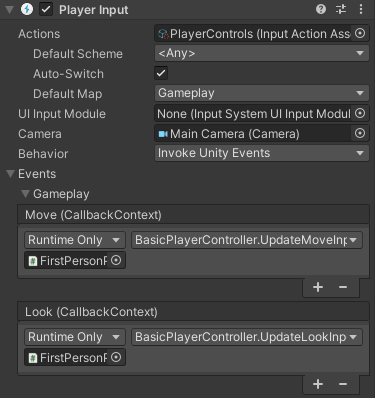 The demo comes with a pre-made Input Action Asset, already set up with 2 control schemes and associated bindings. 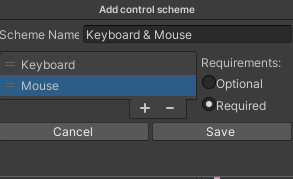 By tying into the PlayerControls Input Action asset, the game can detect & switch between control schemes automatically. The control schemes are set up to require a gamepad for the GenericGamepad scheme, and require both a keyboard and mouse for the Keyboard&Mouse scheme. When inputs are detected on devices required by a different scheme, the scheme used by the PlayerInput component changes to match the most-recently-active scheme. You don’t have to code this yourself - it’s automatic switching!

The player itself is really rudimentary - it does not have ground detection, jumping, or anything production-ready beyond moving & looking around. The player object structure is this:

And yes, the “FirstPersonPlayerContainer” object is not meant to move or rotate. The idea here is that you can easily detach the player character from the player data - if the player dies, you could still have things like account data tied to the container rather than the gameobject that you’re about to destroy & remove from the RAM. Better management of your player this way. It’s probably a bit beyond what this demo should be showing but I think it’s still worth seeing.

The idea is that you interact with the player character in several different sections:

So, how does the New Input System interact with the player to make it move & turn & look? I made a script for that: 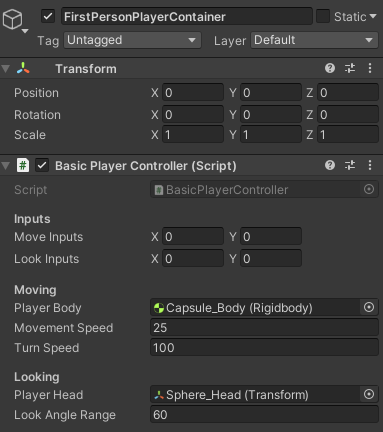 But the general idea is this:

And yes, this means the project does have nice mouse-look controls out-of-the-box.

Show all projects by AlexHolderDeveloper