This tutorial will take you through the steps to export an AR scene created in Unity to Spheroid Script in order to become a part of code created in the Spheroid Demiurge IDE and then to be launched and played on mobile devices in the XR Hub super-app.

Spheroid Unity Exporter has been designed to make the process of creating a scene easy and convenient for you.

You use the Unity editor to position, rotate and scale objects in the scene and animate it. The plugin analyses the scene, remembers the position, angle and scale of objects, as well as their animation. After that, the plugin generates a scene graph in JSON, from which it generates the Spheroid Script resulting file. This file can be uploaded to the Spheroid Demiurge IDE and incorporated into an app.

Before you create your app, you need to create an account in the Spheroid Universe Platform.

If you already have an account in the Spheroid Universe Platform, you can skip this step. 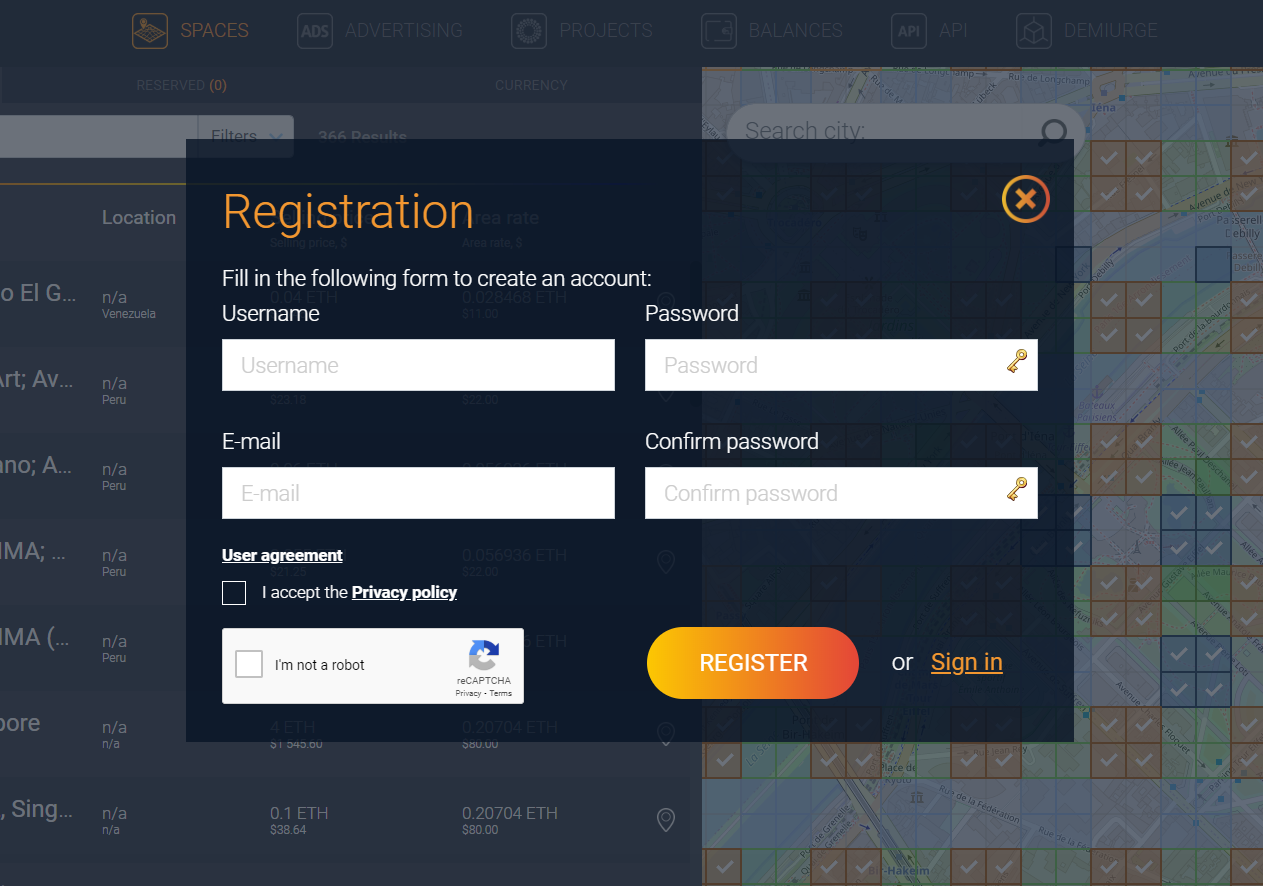 Now you have the access to all Platform services, including the Spheroid Demiurge IDE.

Log in to the Spheroid Demiurge IDE, using the same email and password you used to register in the Platform.

Open the “Apps” tab and click the “Create” button.

Enter the app name, leave the check on the “Create a layer corresponding to this app” box and click the “Create App” button. The app will be created along with the layer you will later use to publish the app into. 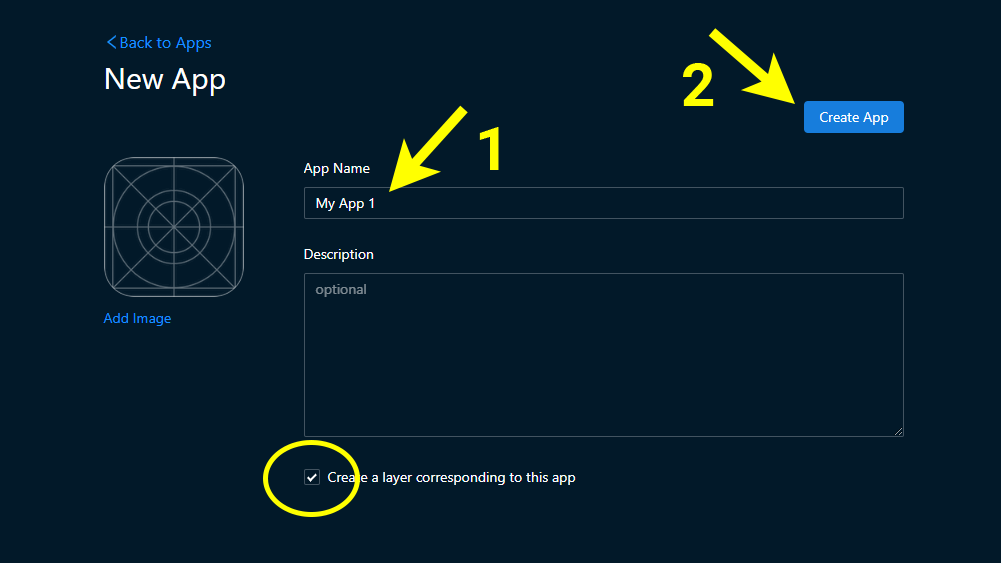 We have already prepared for you the source code you’ll need to create a demo app. Download a zip archive from our repo.

Then extract contents of the zip archive. You’re now all set to upload the source code to your app!

Now, what you need to do is to upload the extracted files with source code to the IDE keeping the tree structure unchanged. So in the root of your app you need to have a folder named “assets”, as well as the four files.

Currently, you can’t upload a whole zip or a folder to the IDE but you can upload multiple files at once by a single drag-n-drop.

Open the “IDE” tab and select your app in the dropdown list.

Create the “assets” folder: right-click the app name and select the “Create a folder” option, then, when the dialog comes up, enter “assets” and click “OK”. In this way, create each folder in the tree structure. There will be several folders where we will put models and sounds we would like to use in the scene.

For each folder, left-click the folder to expand it. The text “Drag-n-drop files here to upload” will appear on the right. Drag-n-drop the files from the corresponding folder on your local PC.

Then, left-click the root folder (with the same name as your app) to expand it and drag-n-drop “app.json” and “Client.spheroid” files. 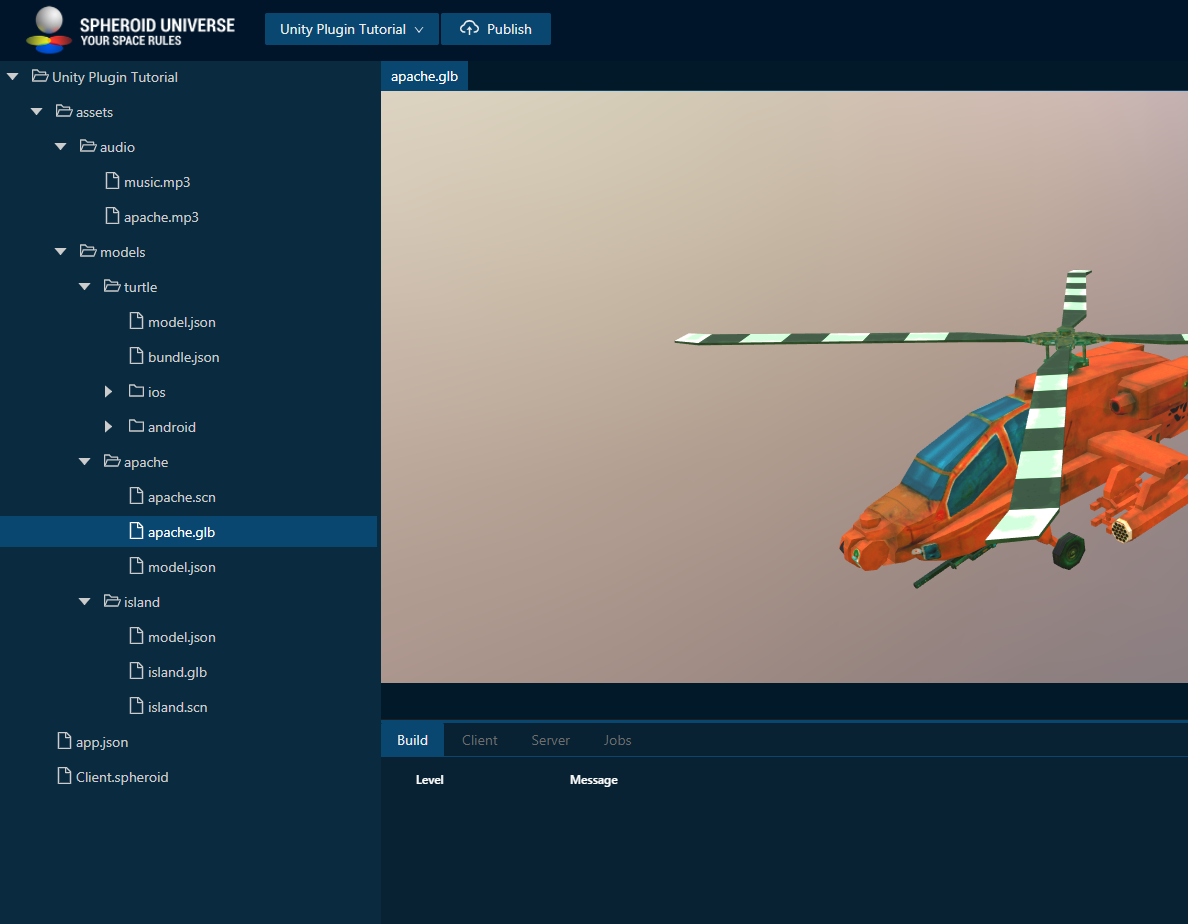 You’re done! Now you can proceed to creating a scene in Unity.

Create a scene in Unity and export it

For a start, you need to create a new project in Unity. In this project, we will create a scene and then markup it and export it to Spheroid Script using the plugin.

If you want to make things quicker, you can open the sample project we have prepared (see the “Unity Project” folder in the zip archive) and skip the scene creation and markup.

Create a new scene in Unity: 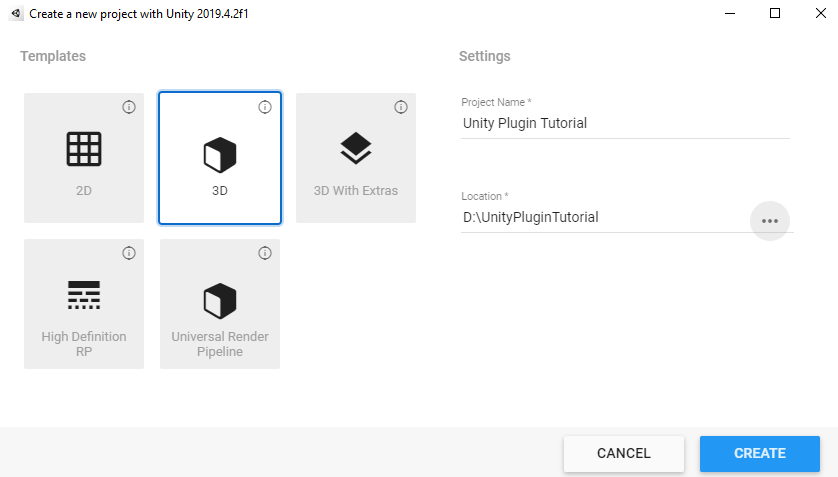 Place the objects on the scene, rotate and scale them. Add animations if you’d like. In the sample project, we have add an animation to the “Helicopters” node to make all nested nodes rotate. 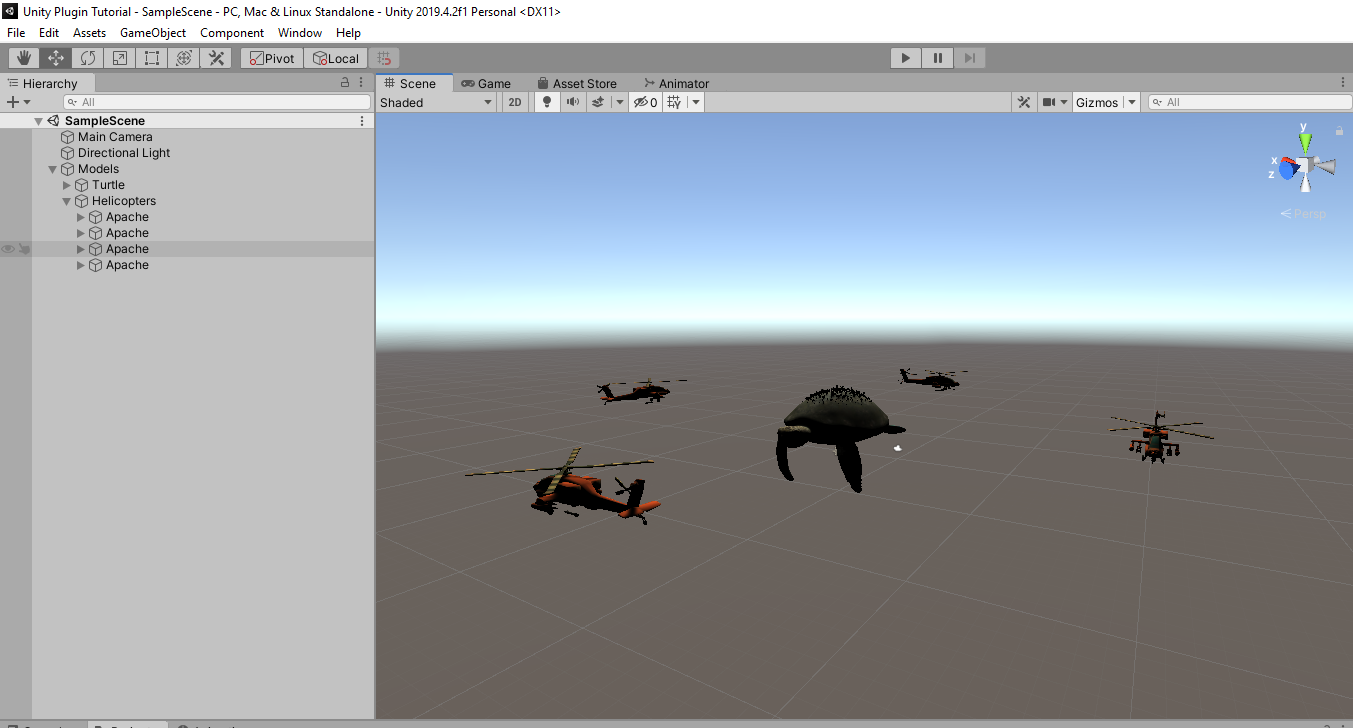 You can find the current version of plugin in the zip archive you have downloaded in the “packages” folder".

Import the package into your project in Unity: 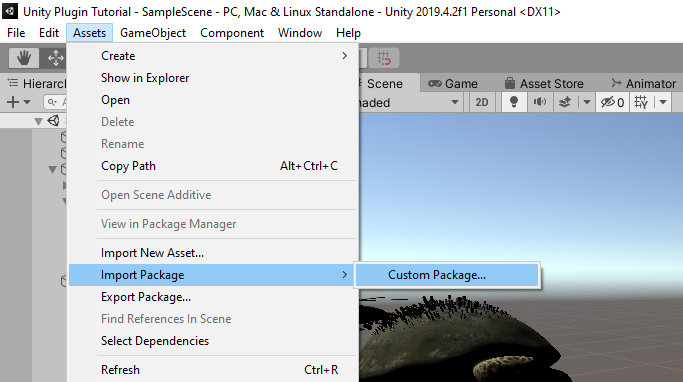 You will see the new “Spheroid Universe” tab has appeared in the menu:

The plugin provides three components for the scene markup:

These components are necessary to help the plugin generate the scene graph and understand which kind of object needs to be created.

Note that plugin reads and remembers only information about the object placement on the scene but not about the model itself. We have added the helicopter model and the turtle model to the Unity scene only for demonstration. We could have used primitives instead. However, it is essential to specify the right paths to the model files in the Spheroid Demiurge IDE.

Fill in all the component fields. Note that path to the file should start with “/”. 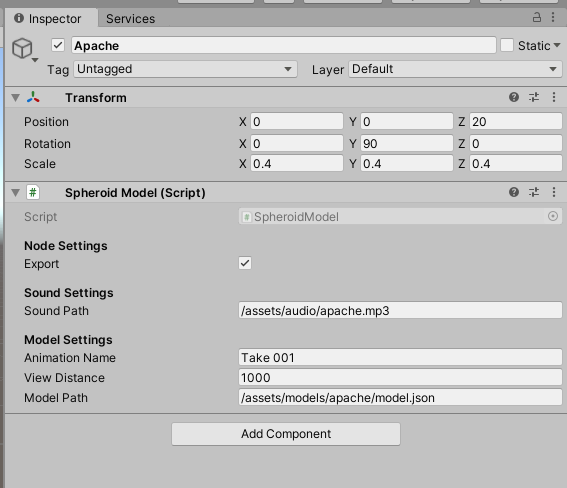 If you would like to add a background sound, create an empty GameObject: 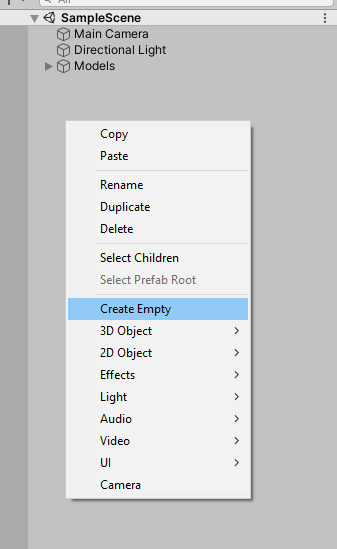 Add a SpheroidAudio component and specify the path to the audio file in your app in the Spheroid Demiurge IDE relatively to the root: 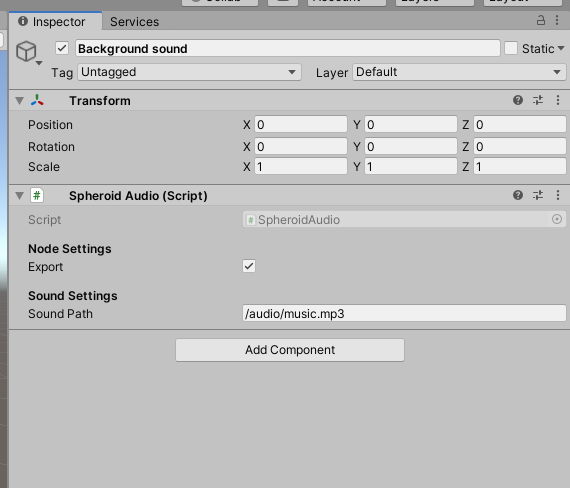 The markup stage is finished. Now we need to export the scene to Spheroid Script.

First, click “Export to JSON”. The “scenegraph.json” file will be generated. You will see in the console: 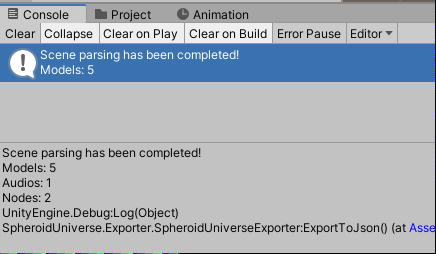 Second, click “Export to Spheroid Script”. The “Scene.spheroid” file will be generated. You will see in the console:

You can find generated files in the “out” folder in your Unity project: 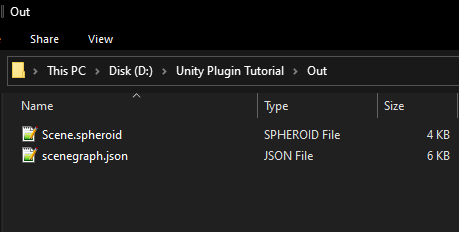 This sums up the work in Unity.

Set everything up in the Spheroid Demiurge IDE

Drag-n-drop the “Scene.spheroid” resulting file generated by the plugin into the root folder in the Spheroid Demiurge IDE: 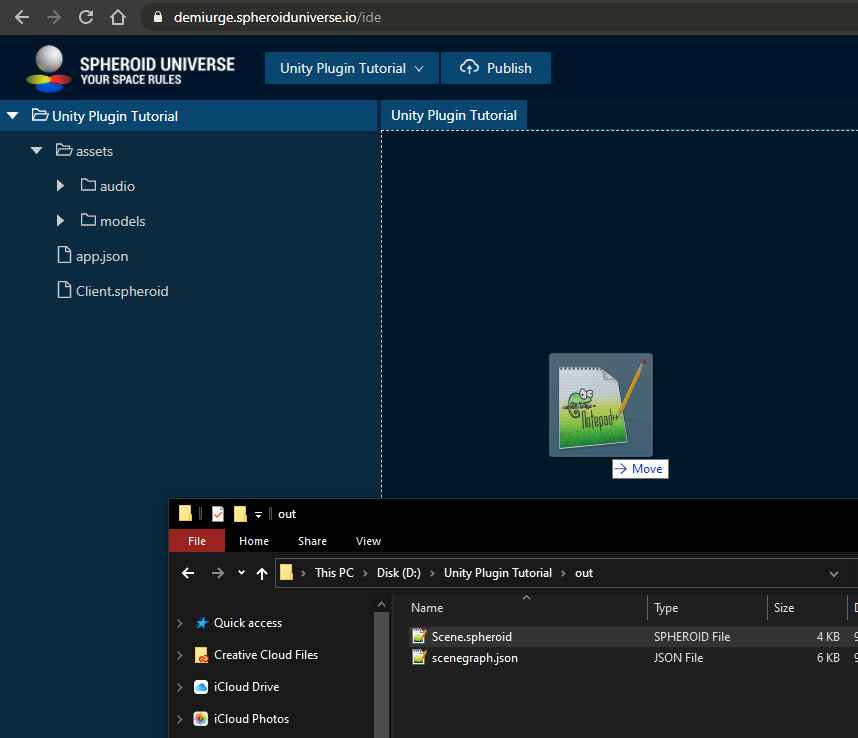 The “Scene.spheroid” file contains script that, while running on your mobile device, will create and place the objects in the same way they were placed in the Unity scene. However, this script is not independent. To run, it needs the special library. You have already uploaded it to your app in the Spheroid Demiurge IDE in “ClientLibrary.spheroid” and “SceneLibrary.spheroid” files. 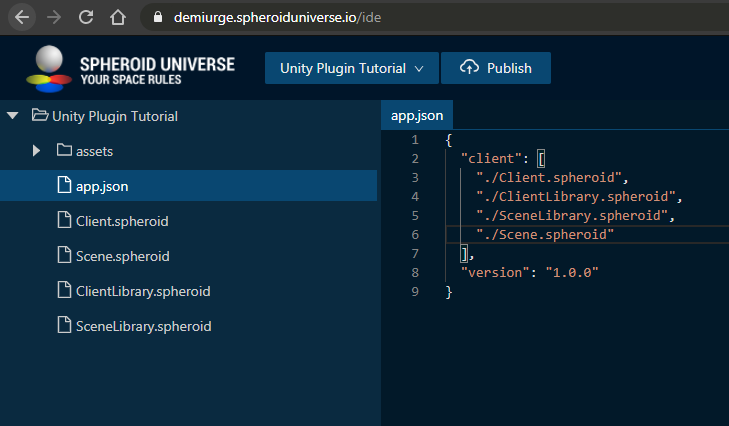 We have also already prepared the code that will create and launch the scene. You can see it in the “Client.spheroid” file:

Now you can proceed to publishing your app. 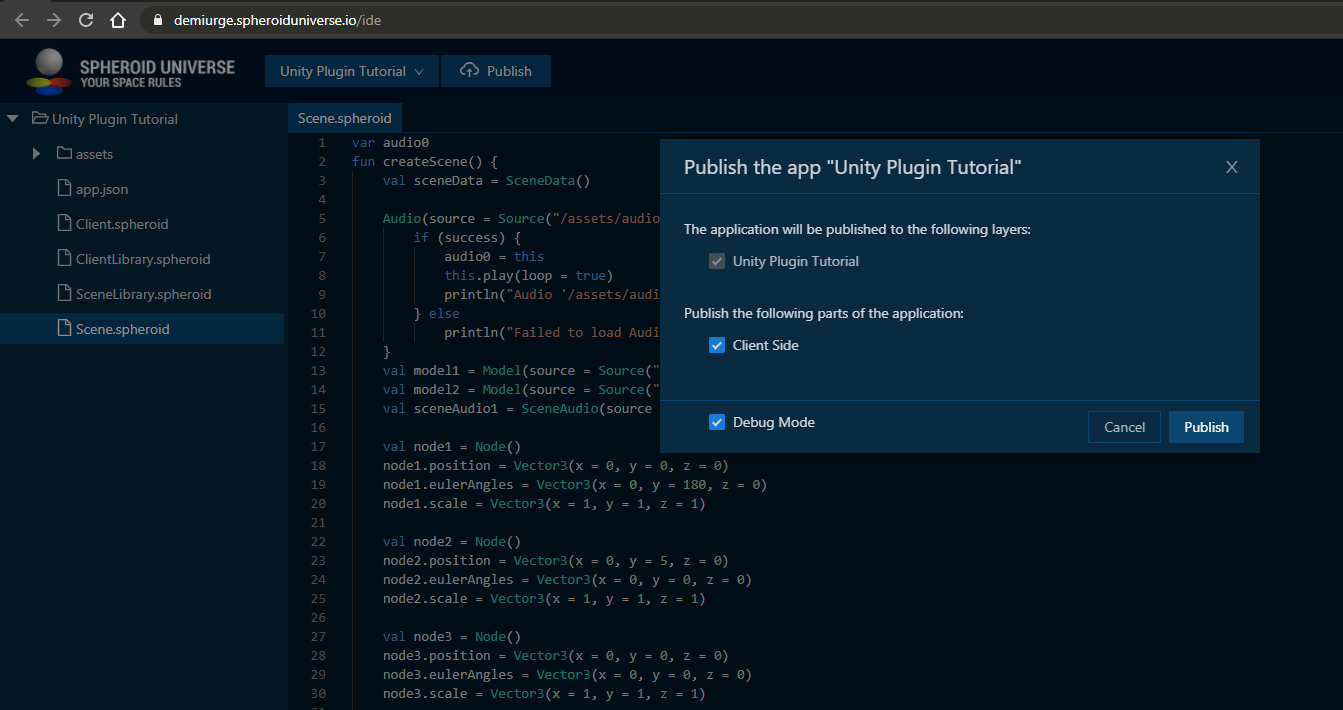 If the publication has been successful, you will see two info messages in the “Build” tab in the bottom pane. Congratulations, you have published your app!

If you don’t see two info messages, or you see error messages instead, check you’ve followed the previous steps accurately and, if so, write us an issue, and we will help you solve the problem.

Launch your app on your mobile phone

Now as you have your app built and published, it’s time to run it on your mobile phone.

Download the XR Hub Android mobile app either by following the Google Play link or by scanning the QR code: 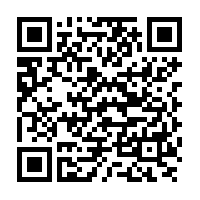 Currently, XR Hub works on the Android devices that support ARCore only. iOS version of the app will be released soon.

Launch the XR Hub app on your phone.

Tap the menu button in the bottom center, then tap the account icon and log in to the app using the same email and password you used to register in the Platform.

When you’re authorized, swipe right through the list of worlds to find the world your app has been published into (world is called “layer” in the Spheroid Demiurge IDE). Note that if you’re not logged in, you won’t see the world, because the worlds created by developers are private. In the later tutorials you will learn how to add testers to your layer aka world.

When you’ve found your world, tap the “Launch” button, and your app will run. Congratulations, you have successfully run your app in the XR Hub!

Now you can try out some changes to the scene, export it and see for yourself how the changes apply. For example, you can add the “island” model to the scene (you can find it in the “assets” folder).

If you have encountered any problems, please let us know by submitting an issue, we will make sure to help you find the solution. Please don’t hesitate to contact us, as your issues and our replies will help to make our platform better and will be valuable to other developers.

Show all projects by SpheroidUniverse