Fixed wing aircraft physics for Unity. Based on paper by Khan and Nahon 2015.

Video explaining the basics of how the system works. 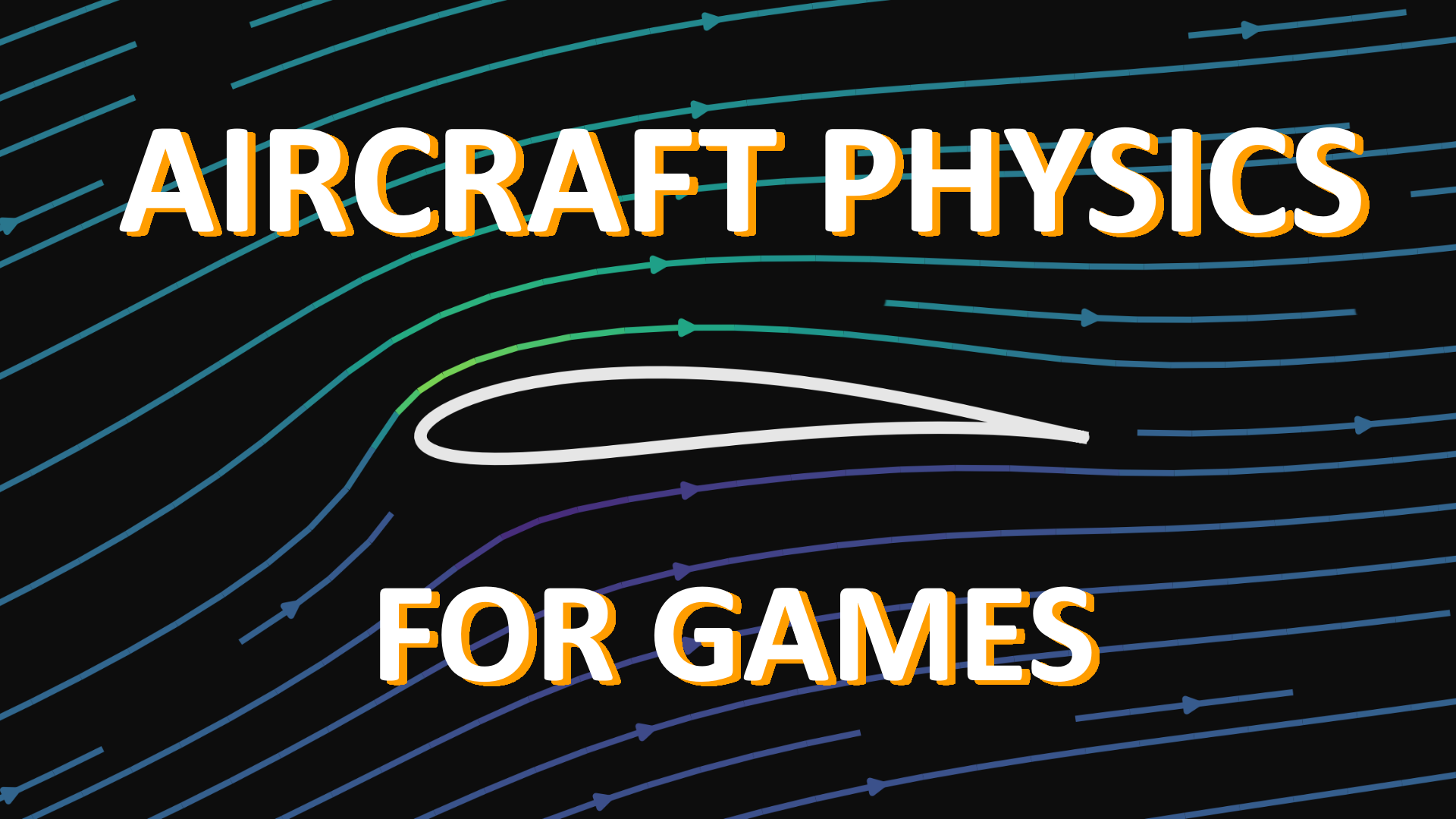 To get started download the repo and open the project in Unity. Open the scene Cessna-172 in the folder Assets/Aircraft Physics/Example/Scenes. In this scene I set up a simple plane. You can try to fly it by hitting play and using instructions on the screen.

Note that this is not a fully realistic Cessna-172. The equations in Khan and Nahon 2015 result in about a 1.5 times more drag than measured for real Cessna. This is probably the result of me using the model outside of its range of applicability. Because of this reason I had to multiply the thrust of the real plane by 1.5. The other significant difference is in the position of the center of mass. Unity doesn’t allow to set density to individual colliders, so the COM is way off.

Let’s see what components do we have on the Aircraft game object. First of all, there is a Rigidbody. Note that it has it’s Drag and Angular Drag fields set to zero. Unity’s built-in drag will mess up the physics of the plane. Though you can have a little bit of angular drag for extra stability, you don’t need it.

The second component is AircraftPhysics. It applies aerodynamic forces and thrust to the Rigidbody. It exposes a field for the thrust force in newtons and a list of AeroSurfaces. This model computes the total force and torque acting on an airplane as a sum of impacts of separate parts, represented by the game objects with AeroSurface components. AeroSurface can be a wing, or a part of a wing, or a part of a tail etc. The rectangular gizmos represent all the AeroSurfaces that constitute this aircraft. The child object of Aircraft called Aerodynamics contains as its children a number of AeroSurfaces referenced in the list in AircraftPhysics. 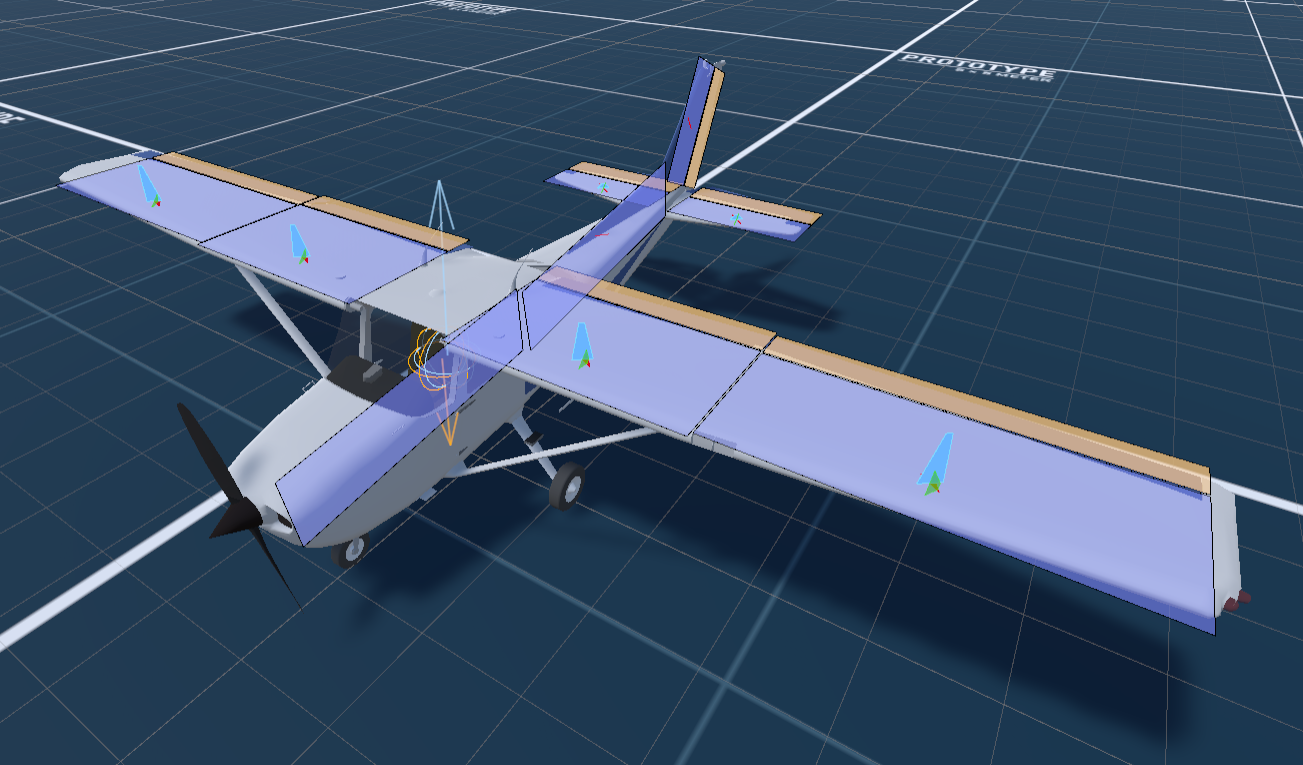 The last component is AircraftController. It interacts with the AircraftPhysics and AeroSurfaces to apply control inputs to the plane. AircraftPhysics and AeroSurface are the core parts of the system and don’t need to be changed most of the time. The AircraftController however is written as an example which you can expand upon.

The another important child of Aircraft called Collision has all the colliders which constitute the plane. For gears I use Unity’s WheelCollider. It can be tricky to work with and quite unpredictable (though the same can probably be said about this system). You can change WheelCollider for something simpler and more robust.

Let’s take a look at the AeroSurface's inspector. 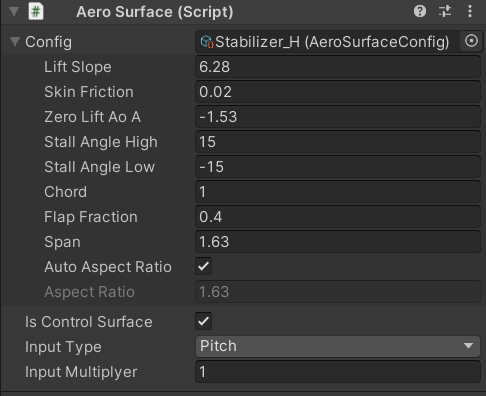 It has a reference to a AeroSurfaceConfig. It is a ScriptableObject that contains the aerodynamic parameters of the surface.

Each AeroSurface with non zero Flap Fraction has a moving part, which deflection angle can be set by a SetFlapAngle method. Using them allows to implement control surfaces. AirplaneController has a list of AeroSurfaces marked as control surfaces. It sets their deflection angles according to their input type. As an example there are Pitch, Yaw, Roll and Flap types. Input multiplier is needed for the surfaces to react to the input in opposite directions (like ailerons).

The important part of constructing an aircraft is to understand the balance of it. This system has some rudimentary editor tools for that. First of all, it shows positions of the center of mass (COM, orange wire sphere) and the aerodynamic center (ADC, blue wire sphere). The latter is defined as a point of application of aerodynamic forces. Secondly, it shows force of gravity and combined aerodynamic forces (arrows pointing from the centers COM and ADC spheres). Lastly, it shows lift, drag and torque acting on each surface as blue, red and green arrows.

The scriptable object AircraftPhysicsDisplaySettings in the Core/Config folder allows to change the appearance of this gizmos. You can also choose angle of attack, airspeed and air density for which forces are calculated in Edit mode. 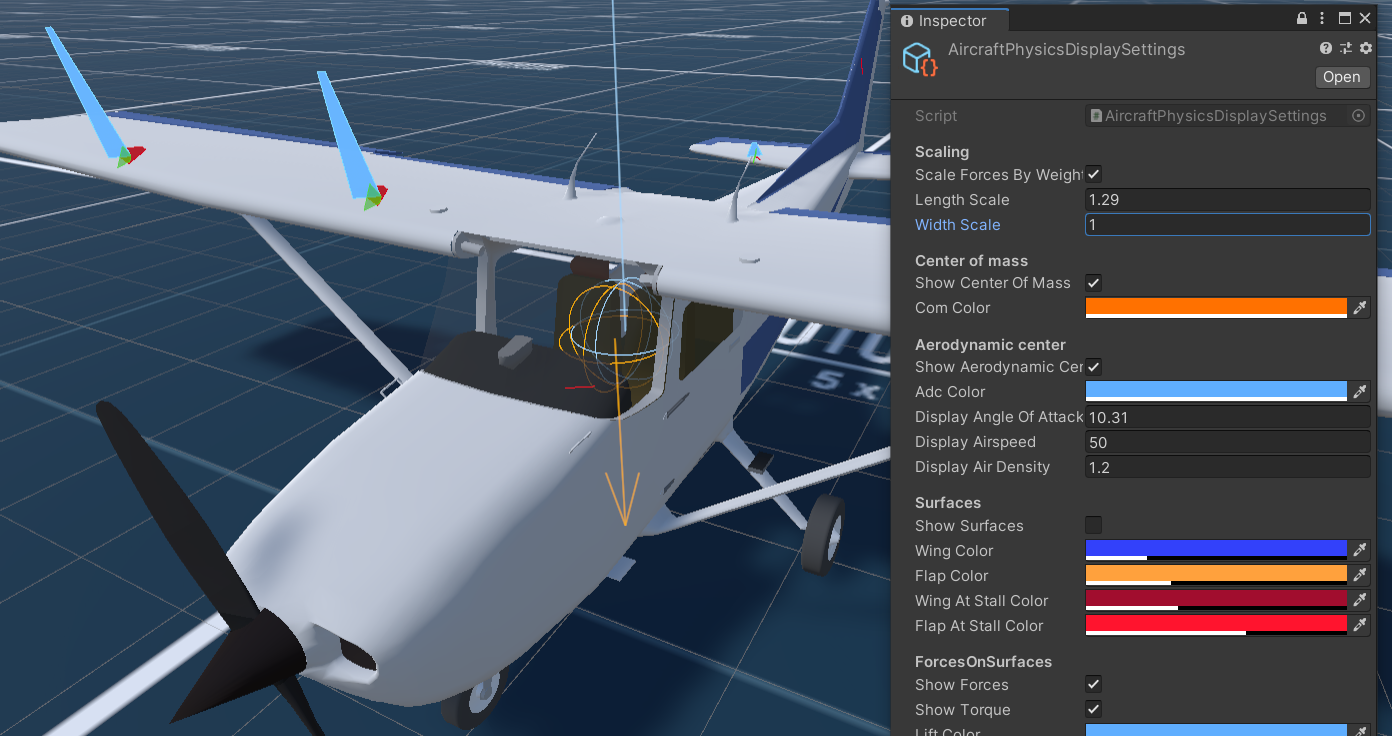 Show all projects by gasgiant