Unity Package: A scene fader manager that loads in scenes and performs tasks. Comes with an extensive SceneUtility class which handles scene management.

A scene fader manager that loads in scenes and performs tasks. Comes with an extensive SceneUtility class which handles scene management.

This package uses the Singleton and StateMachineCallback packages. It is recommended to install both of these packages before installing this one.

Prerequisite packages can also be installed with the same steps below.

This package can be installed through the Unity Package Manager with Unity version 2019.3 or greater.

Open up the package manager Window/Package Manager and click on Add package from git URL....

Paste in this repository’s url.

Click Add and the package will be installed in your project.

You can create the manager by going to Create/Scene Fader/Scene Fader Manager in the Hierarchy window. Only one manager should exist at any given time.

The manager is is charge of fading in and out the screen while performing tasks and operations. 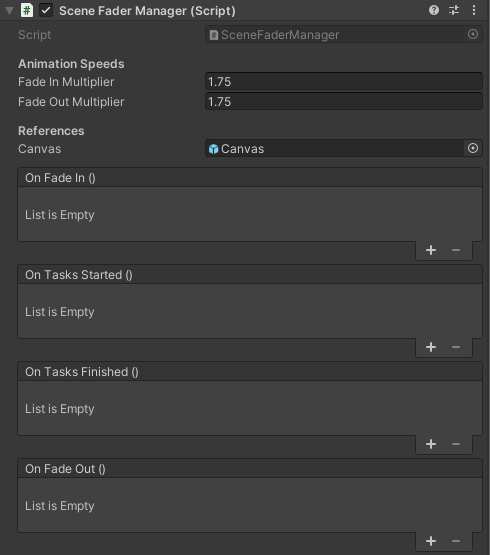 Example 1: This example creates a IEnumerator tasks and gives it to the SceneFaderManager. While the screen has fade to black the scene will be loaded in.

Example 2: This example creates two tasks and gives it to the SceneFaderManager. Together these tasks load in level 2 and unload level 1.

These are just examples for loading in and out scenes but custom coroutines can be created and given to the SceneFaderManager. Ex. Generate a procedural level or spawn in all players.

The Persistent component is used for quickly making game objects’s persistent. When you are loading in and out scenes you should always have an active camera to show the UI and hear audio. Uses DontDestroyOnLoad().

The SceneUtilityFunctions component is a wraper class that uses the static functions found in the SceneUtility. Can be used to instantly load or unload scenes with a UI button or other event.

The SceneFaderFunctions component is a wraper class that uses the functions found in the SceneFaderManager. Can be used to load or unload scenes using the fader’s animation.

SceneUtility is a static class which houses multible methods to load in and out scenes. SceneUtility is a wrapper for Unity’s SceneManager and adds extra functionality, guard clauses, and performace boosts.

These methods are all static and can be called from anywhere.

These methods perform the same functions as the ones above but can be called from a MonoBehaviour and can be used with the SceneFaderManager's task system.

Show all projects by Jason-Skillman