A gameplay scripting framework for the Unity Engine, written in C#.

In this repository you will find the source code to the Stratus Framework, a C# gameplay scripting framework for facilitating the composition of gameplay code for the Unity Engine. Its major tenet is to provide useful features with an easy to use interface while removing of as much boilerplate code from your scripts as possible.

I consider this framework very much a work in progress. Even so I find its core features, the Events and Actions systems to be rather robust, and can be used as is. The interface for them won’t be changing in the future, as any future work on them will be adding features and fixing any discovered issues.

Here are some of the main features within the framework. I have provided sample scripts to display the functionality in the samples folder. To test them just add them to a component in Unity and read the console’s output to inspect the sequence of calls. Some snippets of the code within:

The Trigger System was designed to compose gameplay events by linking triggers and actions in a generic way, by roughly classifying them inside two component families:

Triggers: Components which react to specific events which change the state of the game, such as collisions, timers, input, etc. For example a CollisionTrigger will react to the collisions event of a target object, and will in turn activate a given triggerable (or many). Triggerables: Components that when triggered, change the state of the world in some way. For example the TransformEvent will affect the transform of an object, such as providing translation, rotation or scaling. 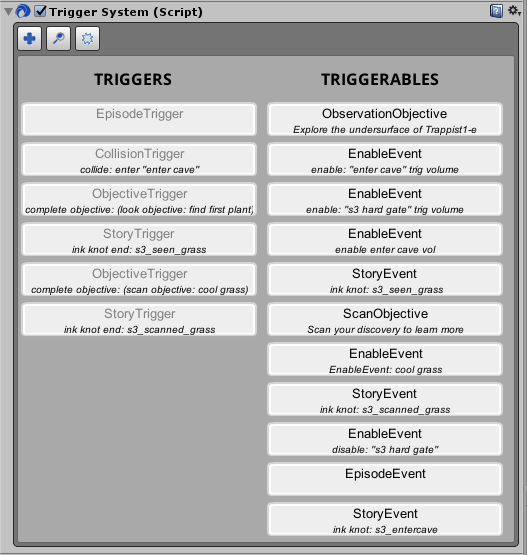 If you discover any bugs or have any and all constructive feedback on how to improve the framework, feel free to contact me.

Show all projects by Azurelol