Workaround To Disabling Head-Tracking On A Unity OpenVR Camera.

Workaround To Disabling Head-Tracking On A Camera in Unity.

Due to some internal limitation with Unity I found that I was unable to stop Unity from stealing all of my cameras and changing their transforms without supplying any option to disable the behavior. So out of frustration I just spent the entire night coming up with my own solution.

Video: Shows the HMD being rotated and moved around rapidly with no noticable jitter or rubber-banding of the HUD overlay.

Here’s how it works: 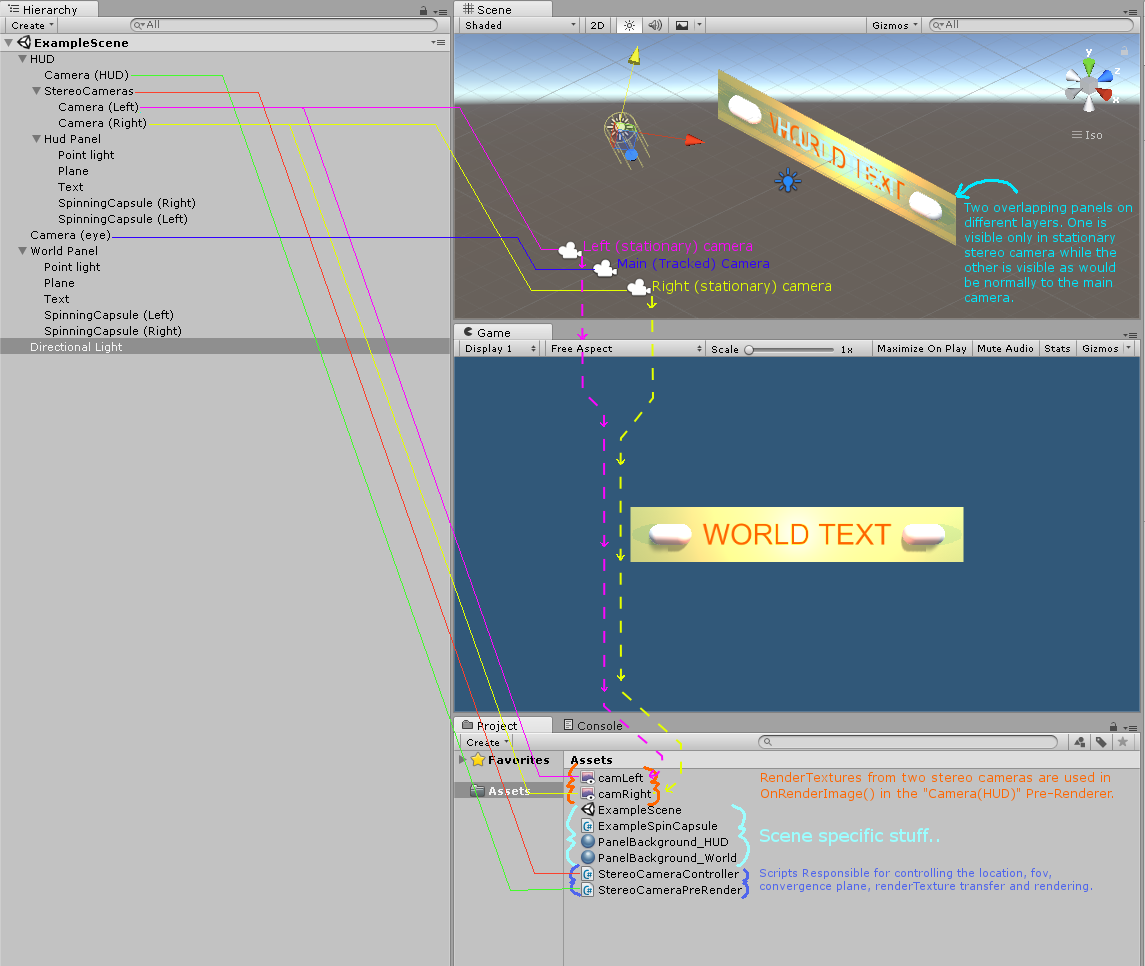 The “Camera (HUD)” is a tracked camera, meaning that Unity will assume that it should follow the gyro of the HMD. This example shows a way to spoof a tracked camera and feed it renderTextures from our own right and left cameras. Anything that this spoofed head-tracked camera “sees” will be irrelevant and is completely overridden by renderTextures from two stationary (left and right) cameras in a custom stereo camera rig that is constructed in the example. By setting the spoofed camera’s culling mask to “Nothing” and then feeding in the two renderTextures from the right and left eye cameras, the spoofed head-tracked camera will display the two stationary camera’s images as it’s own left and right eye and display them in the HMD while being overlaid on top of the main camera.

This example allows building a stereo camera rig from the ground up and gives more control over parameters such as camera position/rotation, eye separation, field of view, convergence plane, and even some renderTexture specific stuff such as anti-aliasing and resolution.

The HUD layer support transparency as well as lights and shadows, so it acts and looks pretty much like any other camera would. 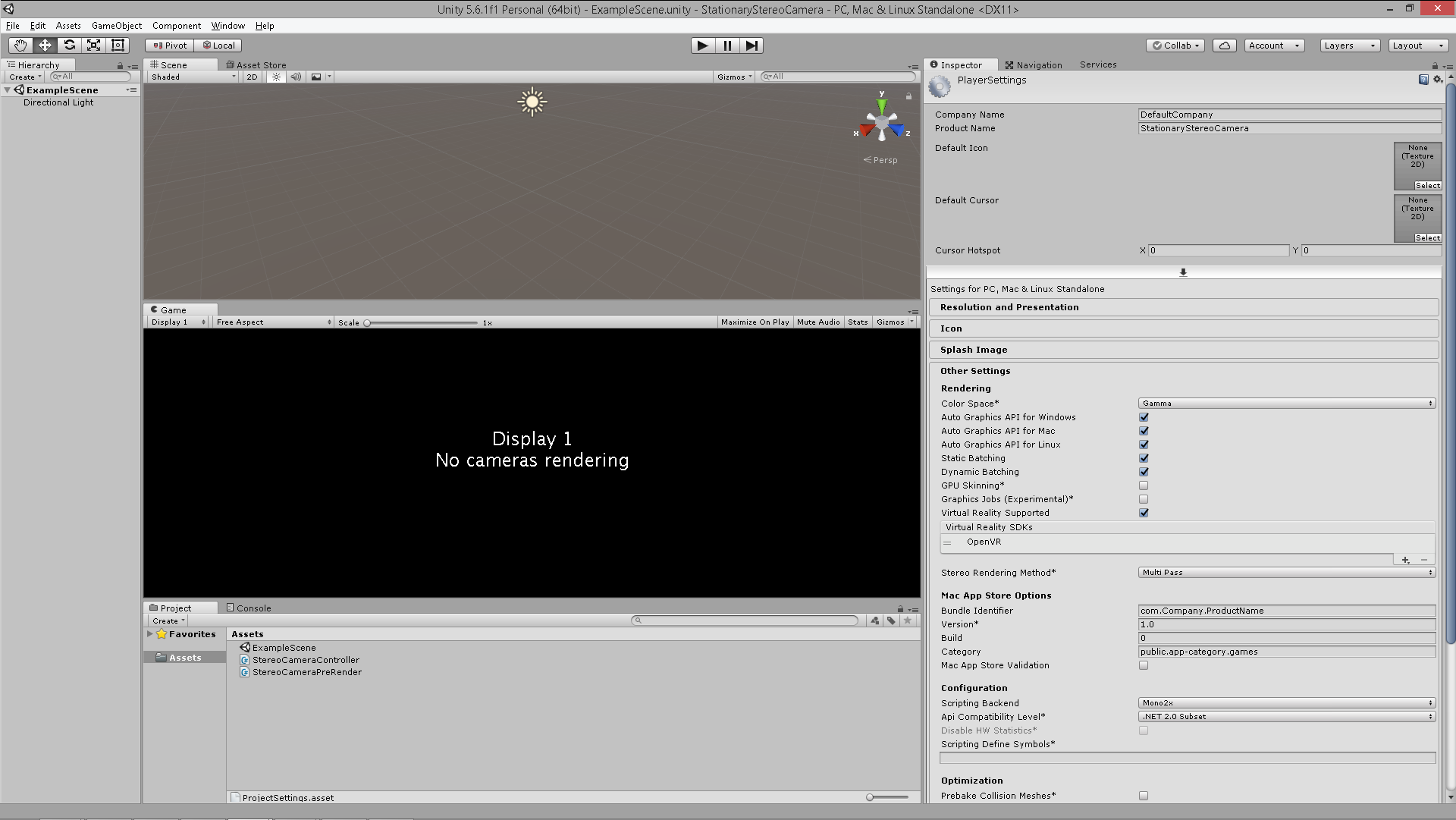 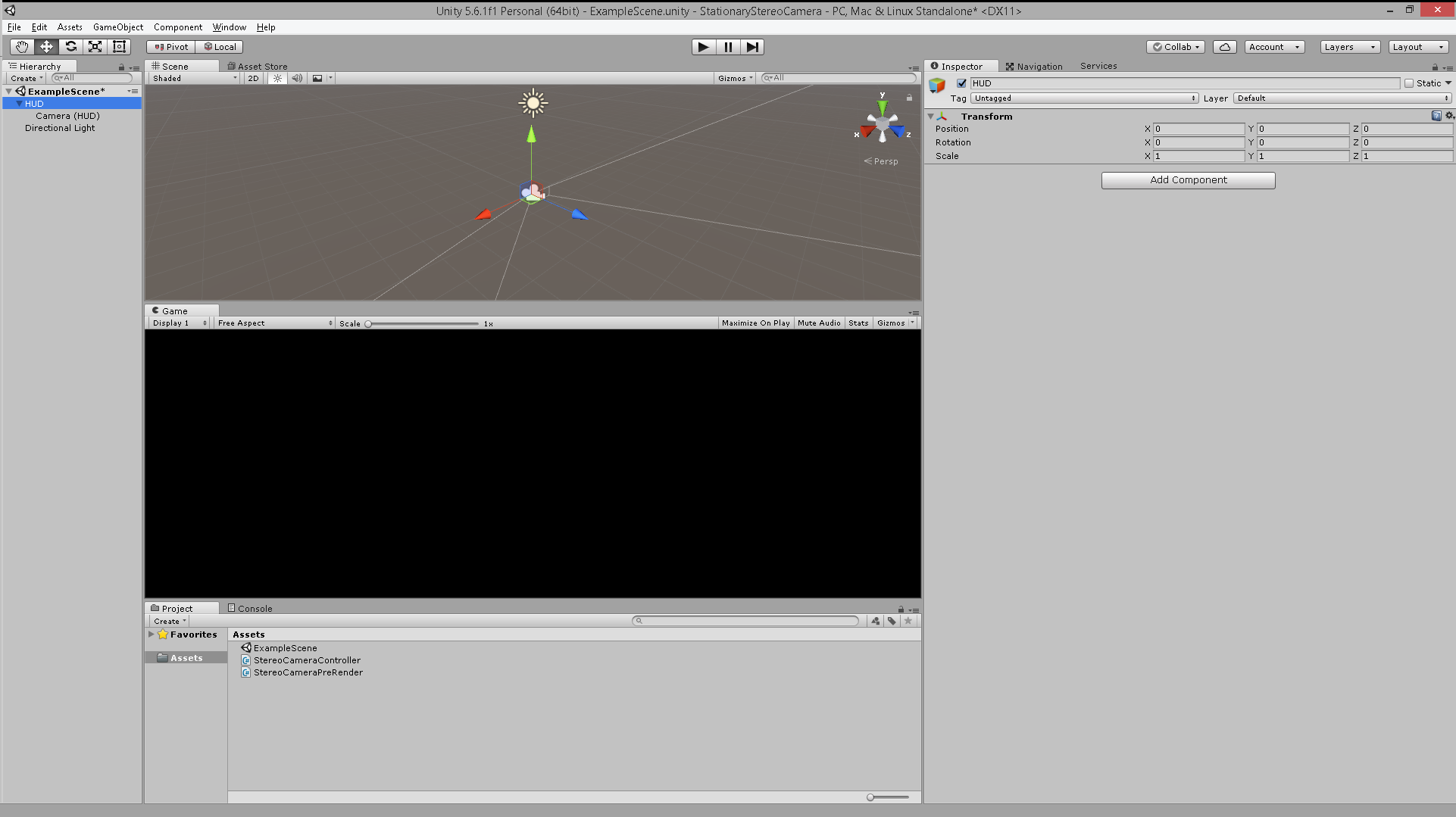 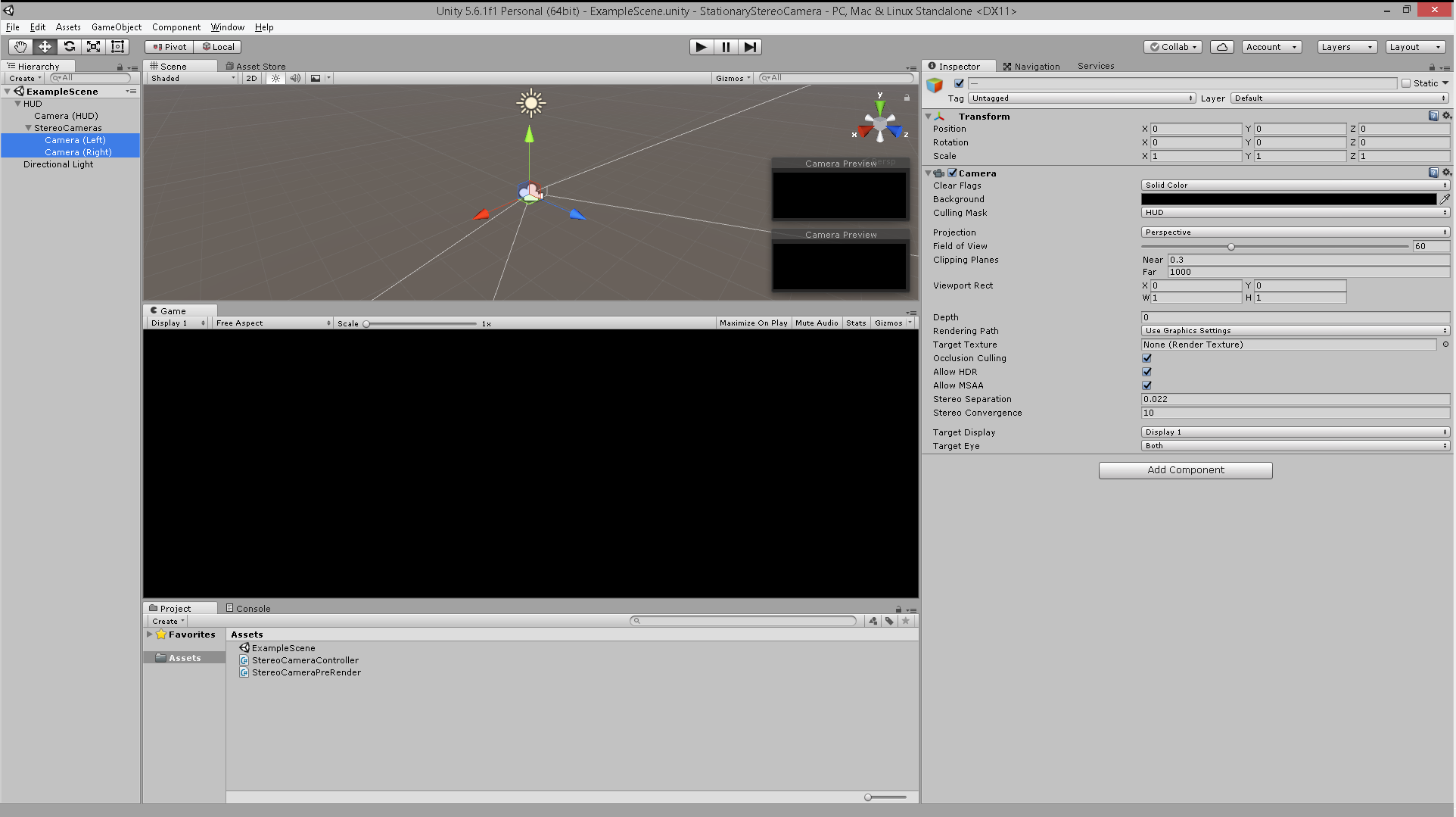 Step 3 - Create and setting up the stationary stereo camera. 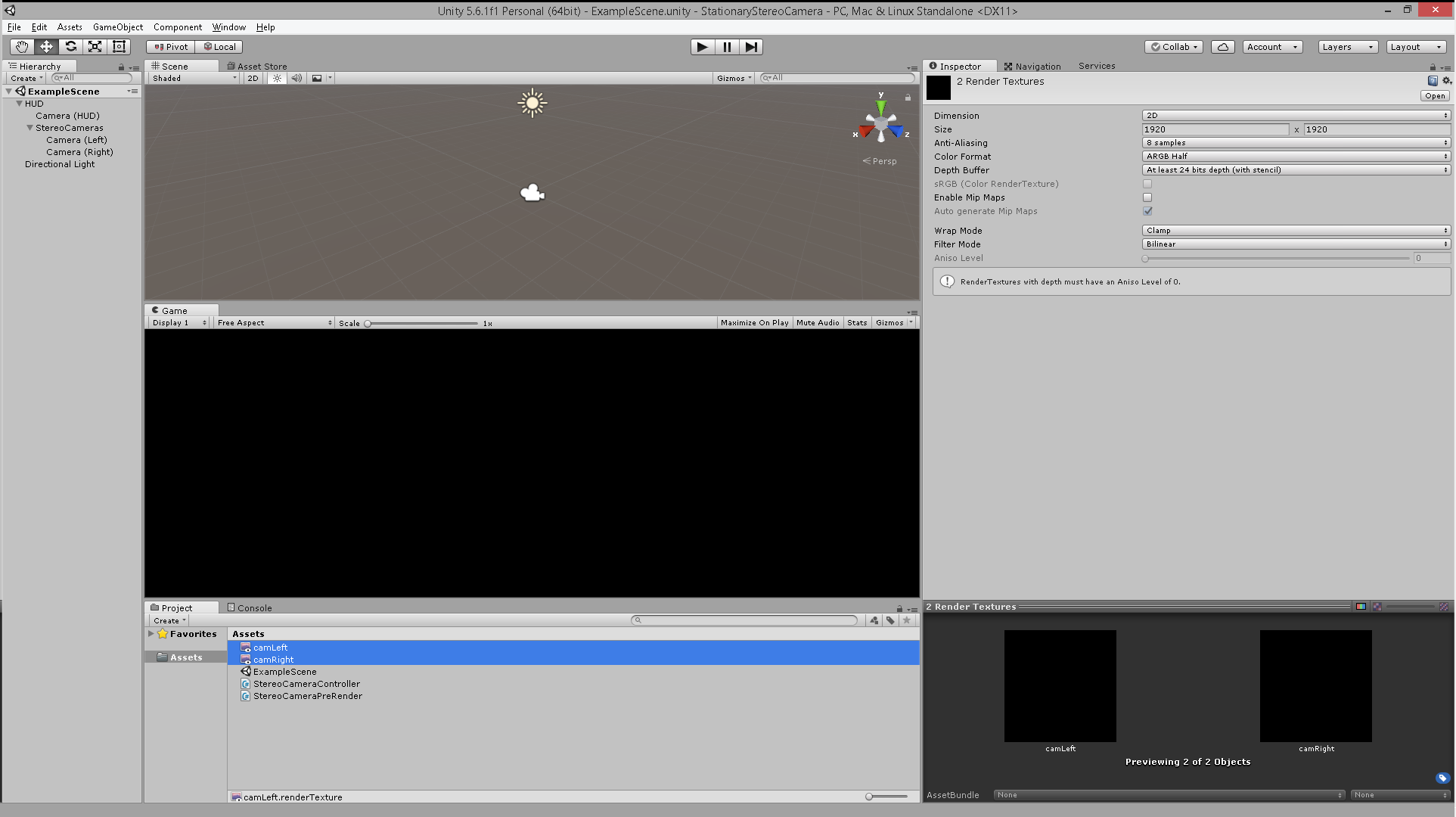 Now that those two cameras have renderTextures attached, Unity will no longer try to change their positions or any other parameters. So all we have to do now is use those renderTextures as the inputs for our tracked camera that is sending video to the HMD. 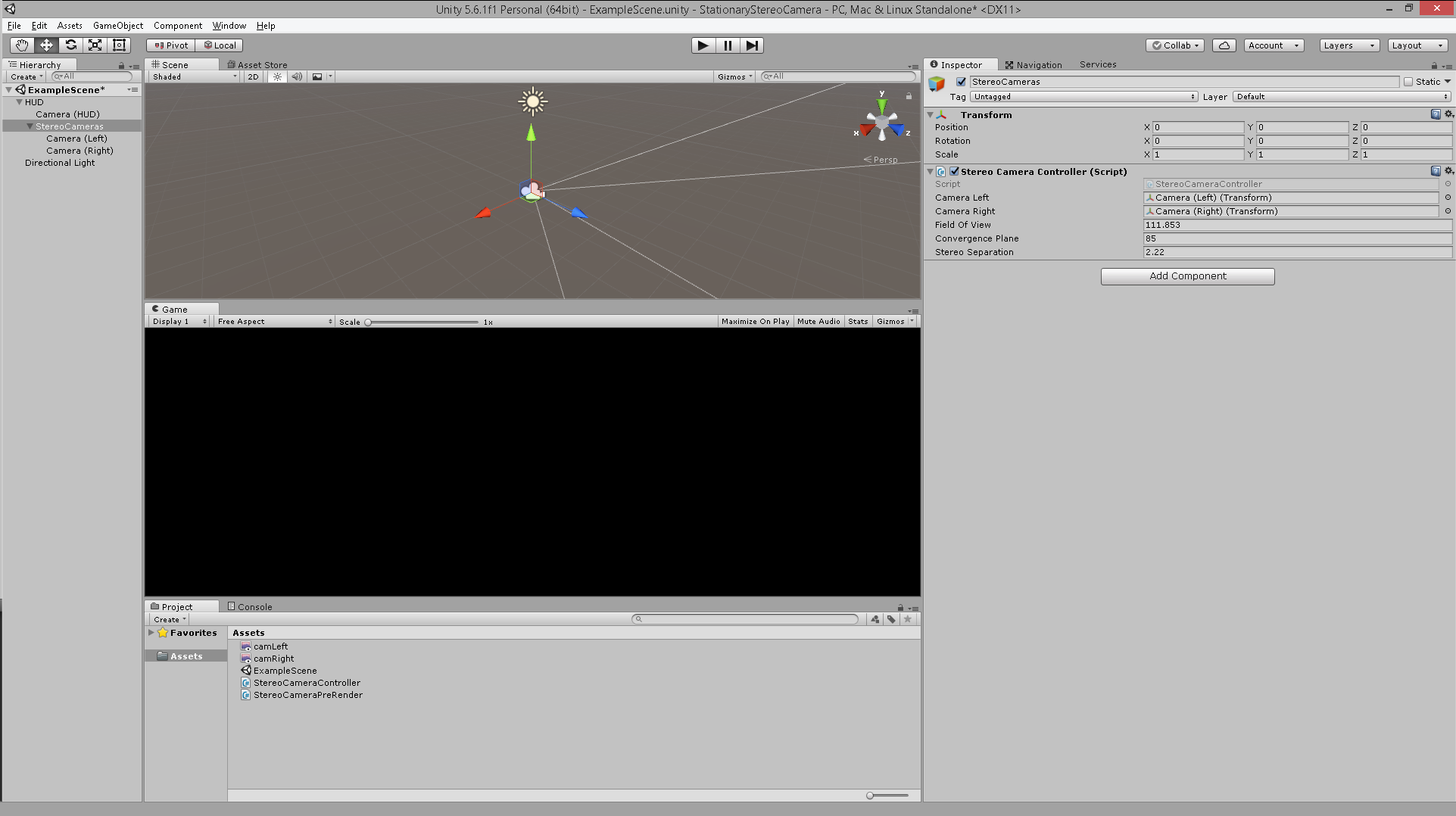 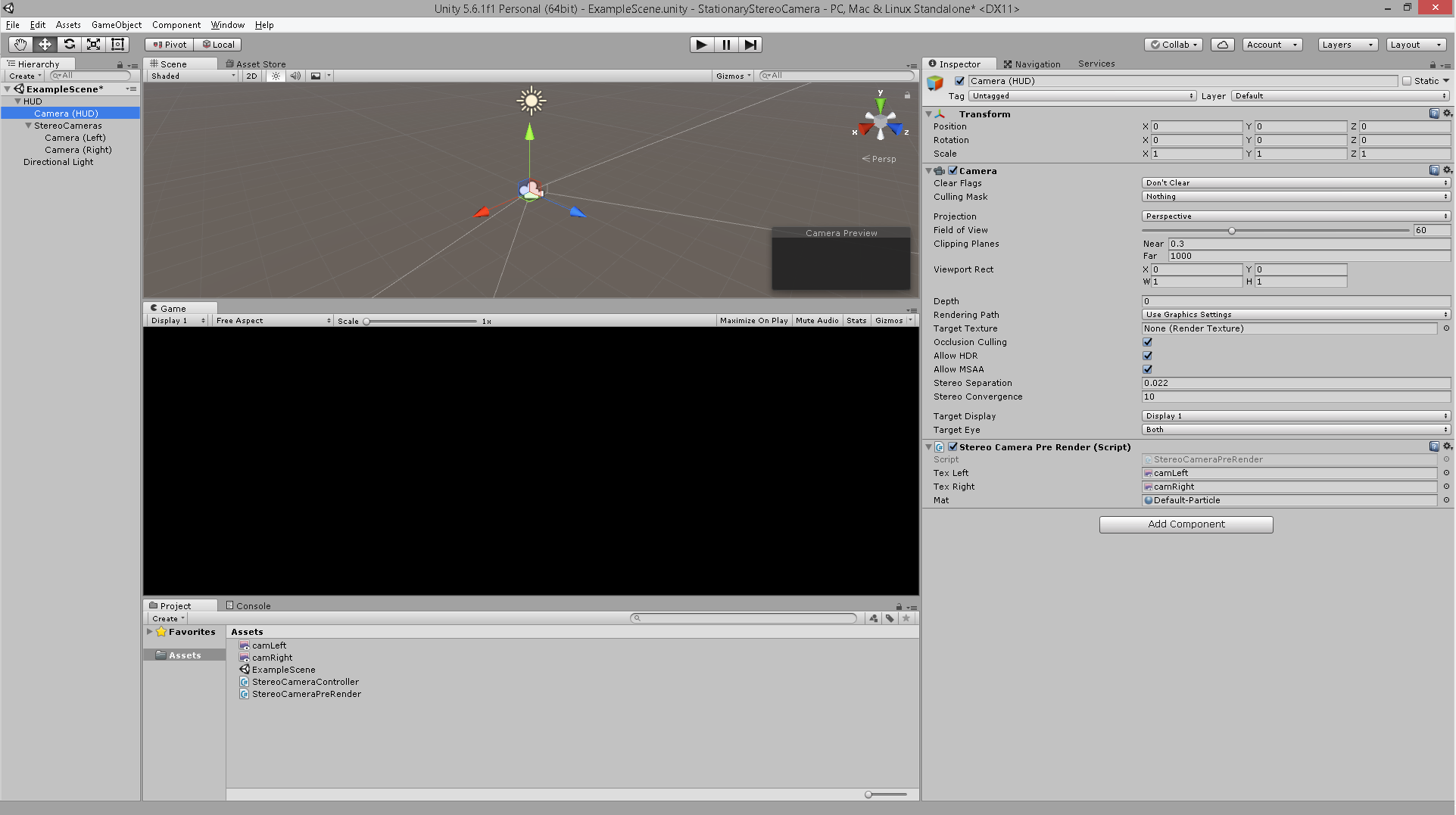 Step 6 - Adding the StereoCameraPreRenderer script and linking the two renderTextures. 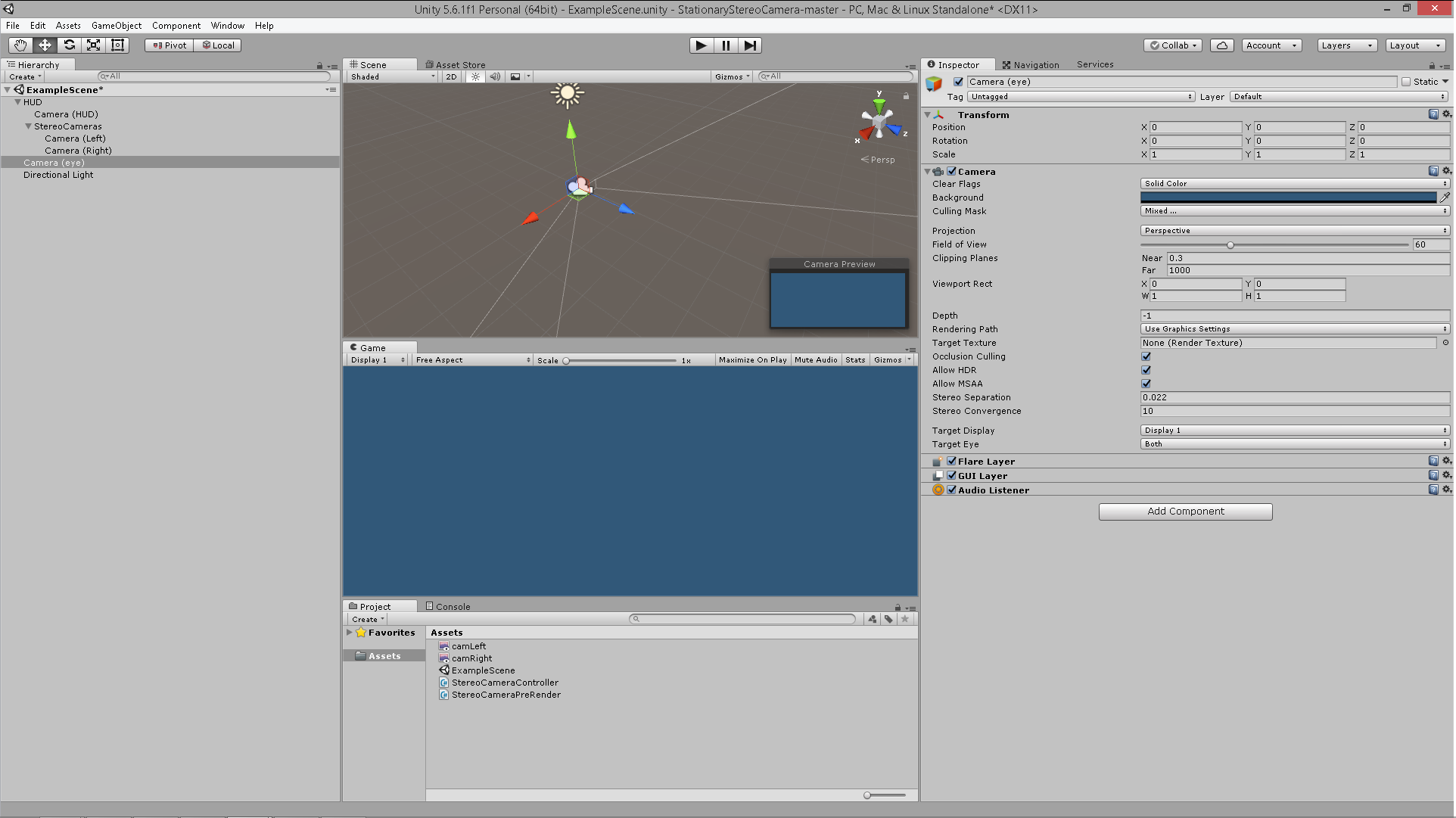 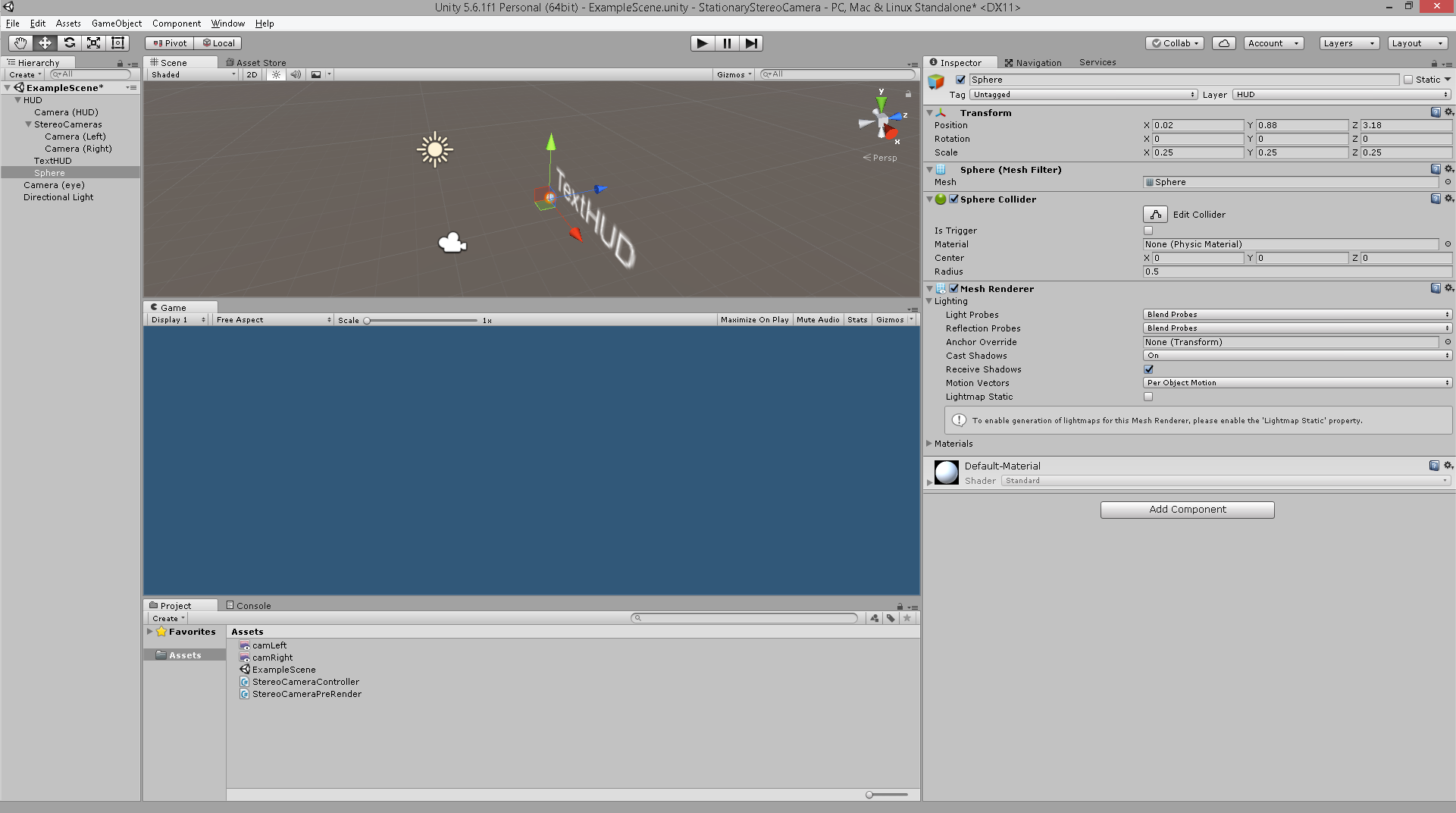 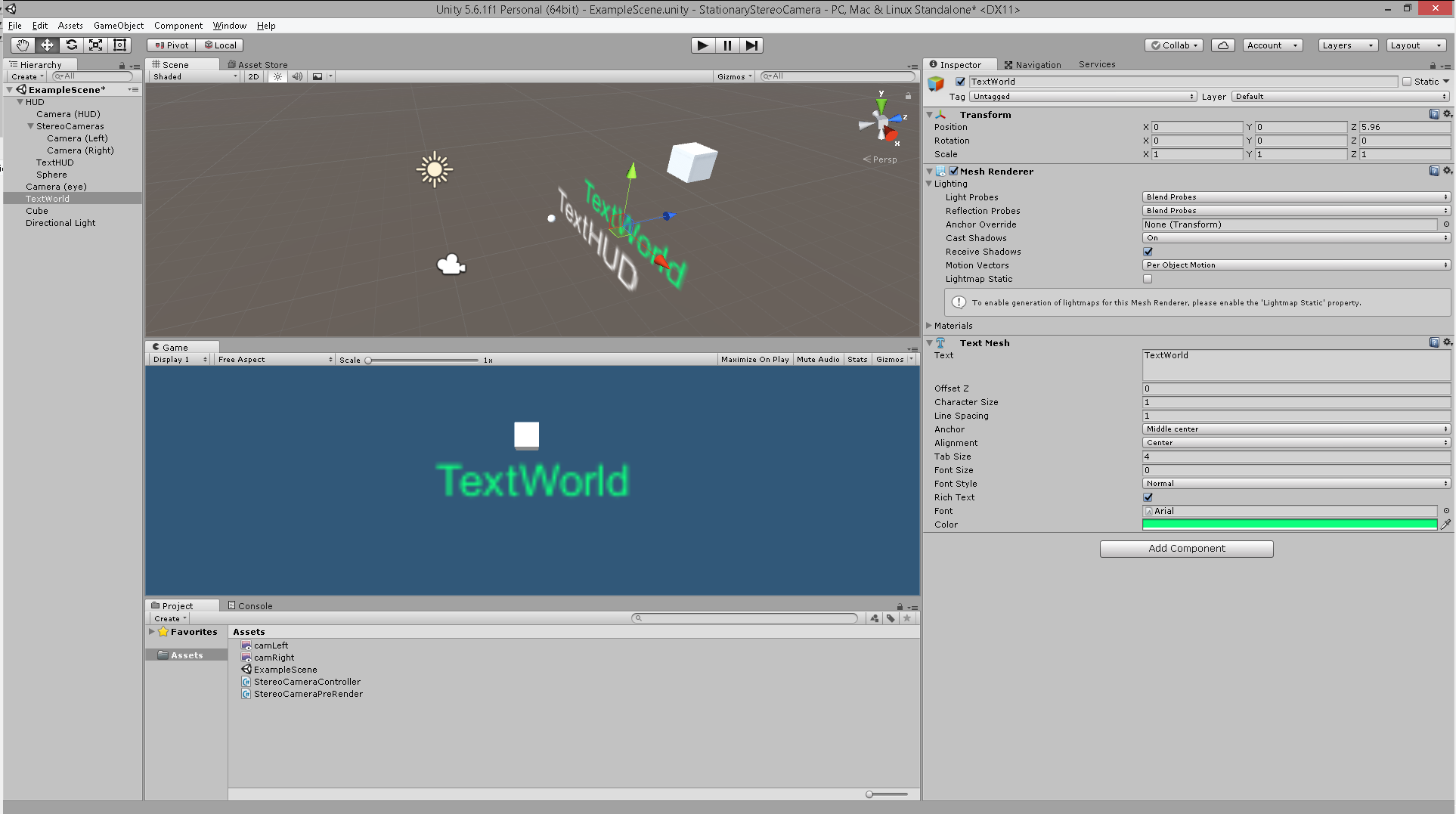 Something to consider when it come to lighting is that you may want to manage the Culling Masks for lights and make sure your main world’s lights do not include the HUD layer (especially the Directional Lights and area lamps). Additionally you can add lighting to you HUD layer by setting the lamp’s Culling Mask to only HUD layer.

Please feel free to use this example in any way you see fit (without restriction of any kind) as well as redistribute, modify and share it with all of your friends and co-workers.

Legal notice: By downloading or using any resource from this example you agree that I (the author) am not liable for any losses or damages due to the use of any part(s) of the content in this example. It is distributed as is and without any warranty or guarantees.

Show all projects by guiglass