Daydream Renderer For Unity by googlevr - 6

Daydream Renderer is a set of scripts and shaders designed to allow for high quality real-time rendering on the Daydream platform targeting 60fps.

To use the renderer, download the unity package from the releases page and import into your project (Assets > Import Package > Custom Package…).

Every scene using Daydream Renderer must have a root level object with a DaydreamRenderer script component. If you’re converting an existing scene with the Import Wizard, this will be added automatically.

Daydream Renderer functionality is exposed via the following:

With the ‘Auto add Daydream lighting components in Scene’ option enabled, all lights in your scene will be automatically kept compatible with the Daydream Renderer lighting system.

You may optionally convert lights in all assets within the project by clicking the ‘Add to Project Assets’ button.

Note: There is a known issue where you have to run your scene at least once before Daydream Renderer lighting start to work.

The Material Wizard assists in converting an existing scene over to Daydream materials. It applies a conversion process to preserve all the feature selections of the original Unity shader but converted to the Daydream standard shader.

You can click Scan Materials to see how many dynamic and static objects that exist within the scene that need converting to Daydream Renderer.

Once converted the wizard provides a ‘revert’ option allowing you to go back to the initial material setup.

The DaydreamRendererDynamicLighting scene shows how to use dynamic normal mapped lights, lit transparencies, lit particles and dynamic shadow casting. Everything in the scene is lit by 8 dynamic lights and 5 of those lights can cast dynamic shadows. Note also that specular on the “metallic boxes” is attenuated by the alpha component of the albedo texture, adding extra richness to the shading. 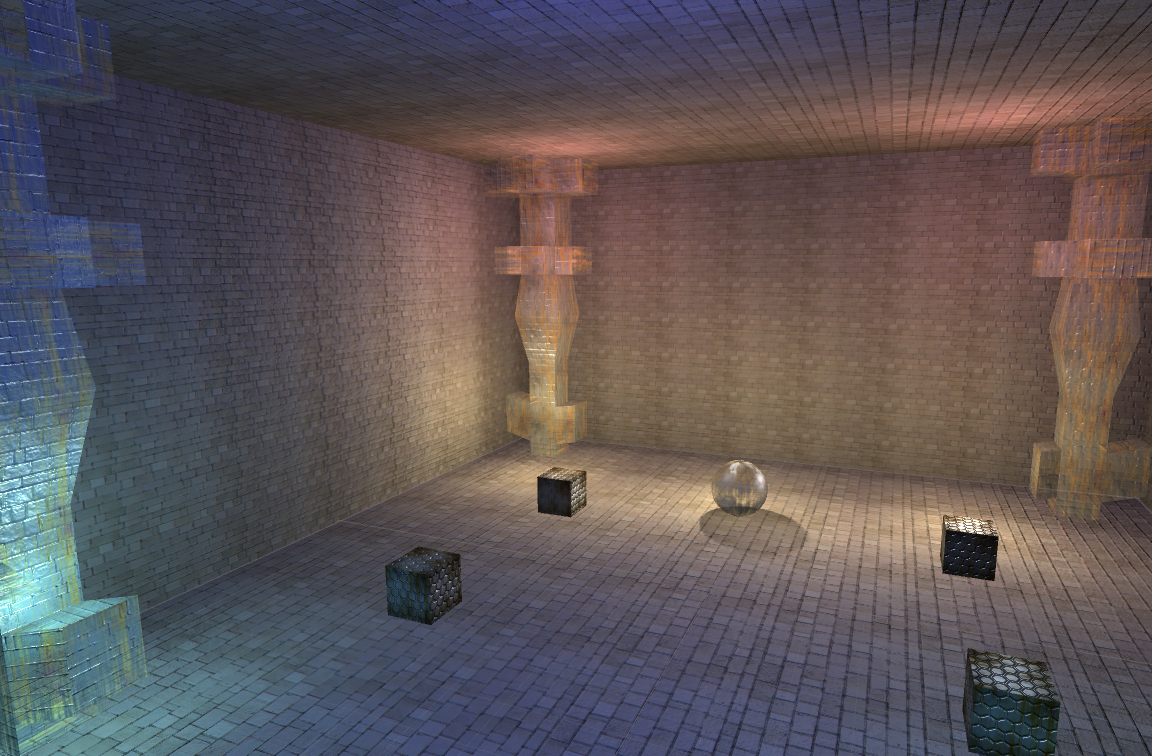 The DaydreamRendererStaticLighting scene demonstrates static lighting using the Daydream Vertex Lighting allowing all surfaces to be affected by a large number of static, normal-mapped lights at almost no additional runtime cost with full specular support. All of the lights are mixed, so dynamic objects will still be affected - allowing for easier integration of static and dynamic lighting. 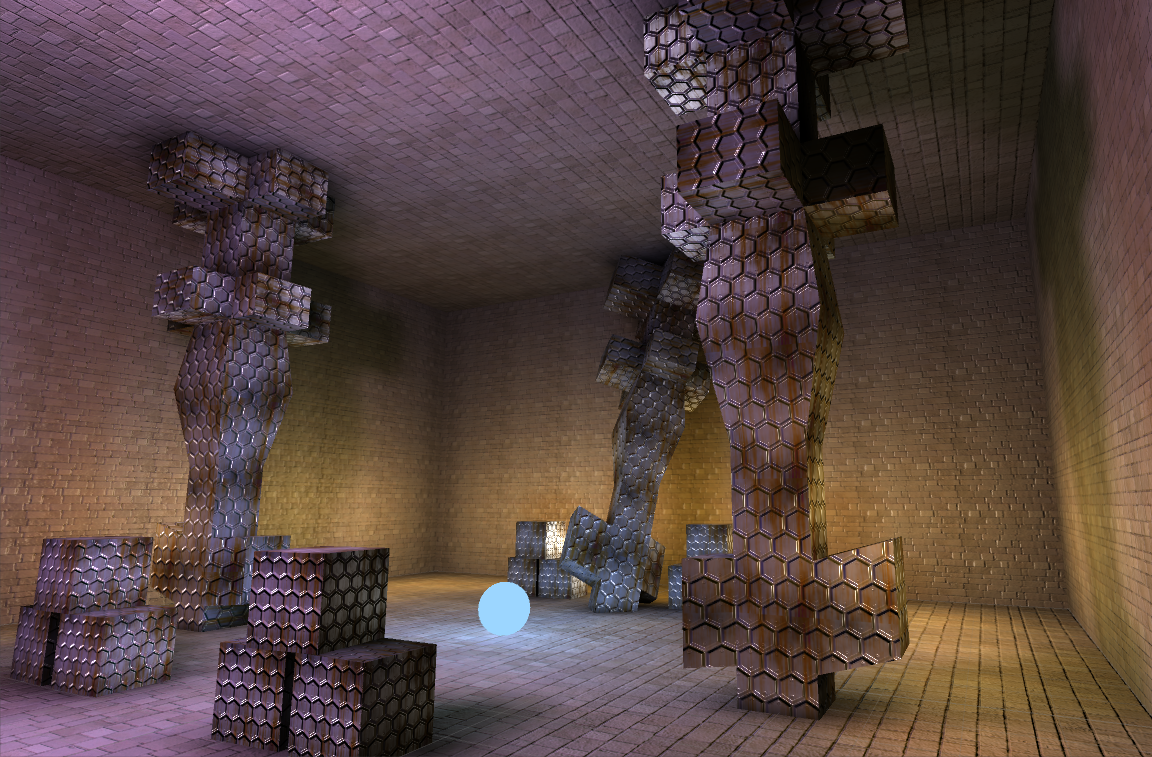 To use the lighting system you will need to apply one of the Daydream Renderer shaders to your materials. There are a variety of settings that you can adjust with different visual / performance tradeoffs.

Daydream/Standard shader covers most use cases, supporting diffuse and specular with normal maps or detail maps. If you are not sure which one to use, then use this one.

Daydream/Diffuse shader is a simplified shader that may provide better performance if you do not need specular or reflections.

The Specular and Reflection Lightprobe options will expand if those are selected and those sections will be detailed later.

The following settings are available on the material in the Inspector view. Note that some of these settings are only available in specific shaders - those will be called out in parenthesis.

Here is an example of the shown reflection cubemap being used in monochrome fashion with a normal map: 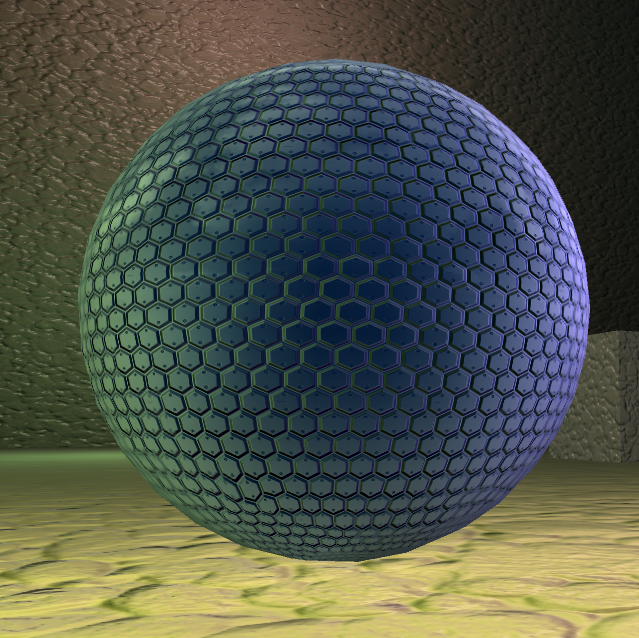 The Base Color is dark blue and Colored Specular is NOT enabled. The colors are coming from the nearby green and purple lights. As you can see the cubemap lookup is not distorted by the normal map, due to the high cost of dependent texture reads on mobile. However other effects that do use the normal map, such as approximate fresnel, the correct impression is given.

To enable static lighting you must mark the game object as static and toggle the ‘Enable Static Lighting’ parameter on the daydream material. 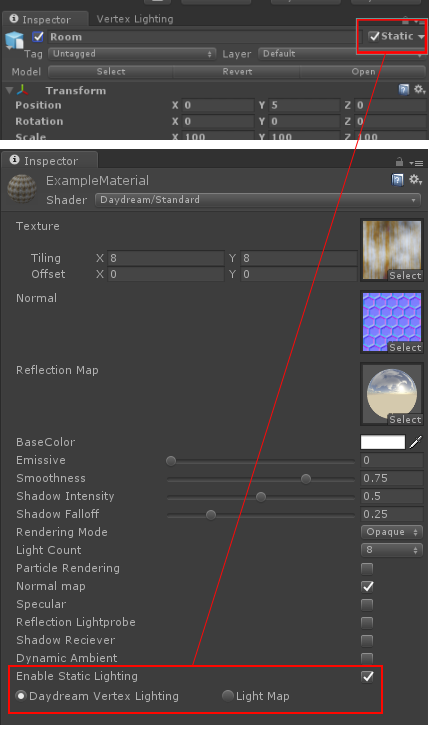 There are several options available to you in the UI. 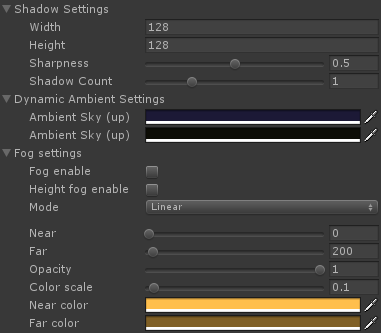 The Daydream Renderer supports a limited number of “hero” shadows, typically characters and/or enemies, rather than using scene scale shadows - which should be handled by static lighting. The number of shadow sources is essentially unlimited but the number of shadow casters is limited - ranging from 1 to 4. Here you can decide how many shadow casters you wish to support, the resolution of the shadow maps and the softness of the shadow edges. It is recommended that 1 shadow caster is used, if possible, since the jump for 1 caster to 2 is much larger than the jump from 2 to 3 or 4.

Add the ShadowCaster component to objects that you want to cast shadow and enable the Shadow Reciever option on materials that should recieve the shadow. 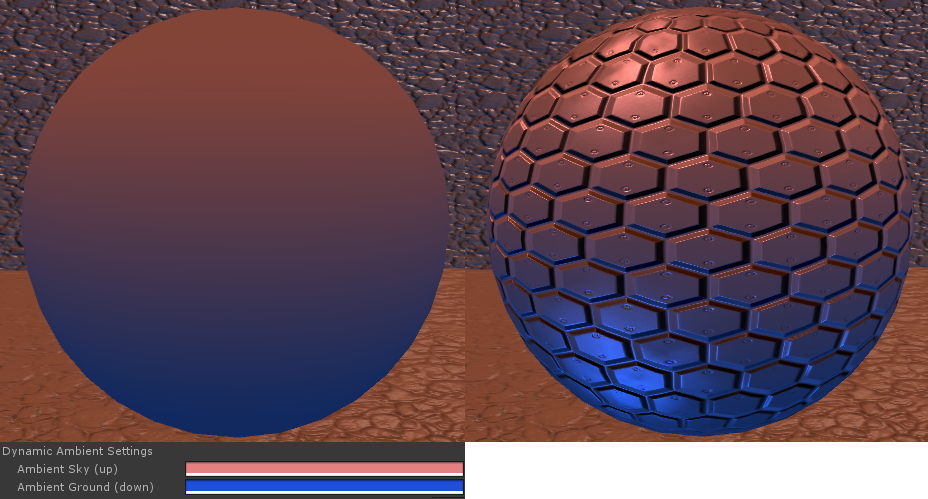 Both distanced based and height based fog is supported, where fog values are computed per-vertex to limit the per-pixel cost of adding fog. 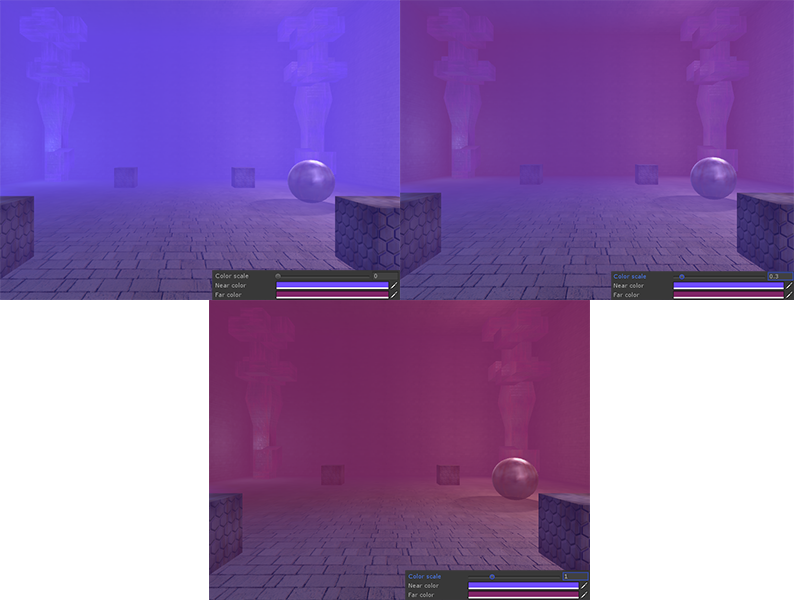 If Height fog is enabled, then 3 extra values get added - Min height, Max height and** Thickness**.

Here is a view with the camera inside the fog using the lower Thickness setting. Notice that the fog looks more opaque once “inside” since the camera is looking through more of it. So generally you want to use larger Thickness values if the camera will stay outside of the fog and use smaller, more “realistic” values when inside. Thickness of 1 is the “correct” value - in that it matches the standard fog. (See the screenshot below)

[Thickness of 4, viewed from “inside”] 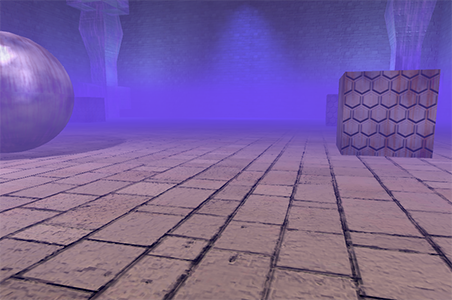 For each shadow casting set, the system generates a tight fitting frustum that maximizes shadow map usage, meaning that small shadow maps can give clean looking shadows. Note, however, that this system does not support self-shadowing, since that is very hard to do cleanly on mobile while being performant. So in general you have separate shadow casters and receivers.

To setup a shadow caster, select the object in Unity and add the Shadow Caster script component. All of its children will be automatically included. Set the ShadowID to 0, 1, 2 or 3 - this identifies which of the maximum shadow caster slots this will use. Once this script is added, the Cast Shadows option in the Mesh Renderer will be honored. As usual change that to On to enable shadow casting on this object.

Any number of lights can be set as shadow sources. Note that a shadow caster will only cast a shadow from one of these lights at a time, however the system will automatically fade the shadows so that it can move from source to source and the shadows will not pop. To flag a light as a shadow source, select it in the Unity editor and add the Shadow Source script component. When this script is attached then the system will honor the Shadow Type setting on the Light component. Currently Hard Shadows and Soft Shadows will produce the same results, modified by the global Sharpness setting. Soon the Sharpness setting in the Shadow Source script will be honored, which will allow you to change the sharpness of the shadow edges per light.

To get to that menu, go to Window -> Daydream Renderer -> Vertex Lighting. 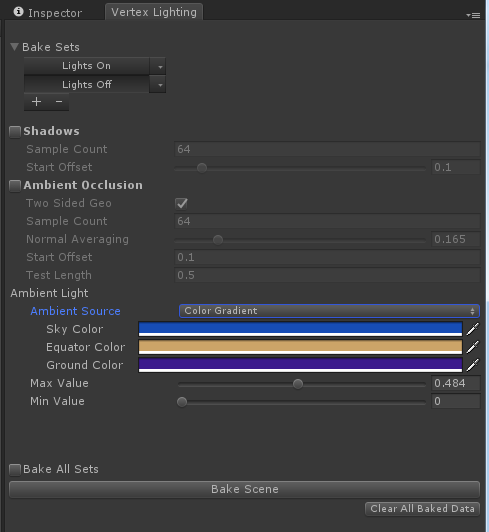 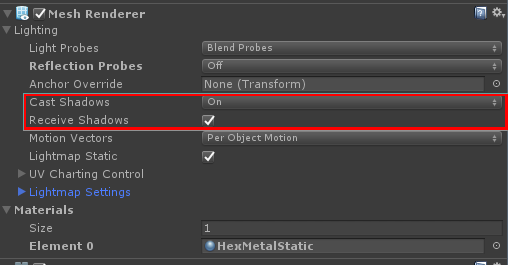 Bake sets allow baking multiple lighting and bake settings configurations for a single scene, and supports switching between the baked sets at runtime. 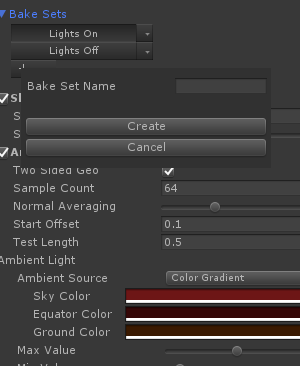 Bake set lights can be selected using the sets drop down menu. 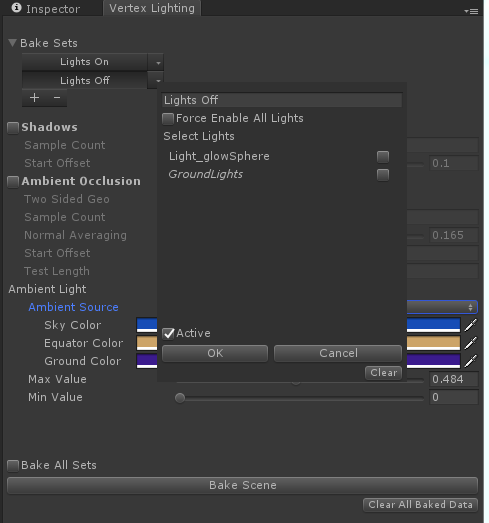 In case of geometry that needs fine tuning, the Vertex Lighting Override script can be applied on a per-object basis. This allows overriding static AO and static shadowing details.

To clear data for a specific bake set you can use the context drop down menu for the bake set in question and hit the ‘clear’ button. This will clear the baked mesh data for that bake set only. 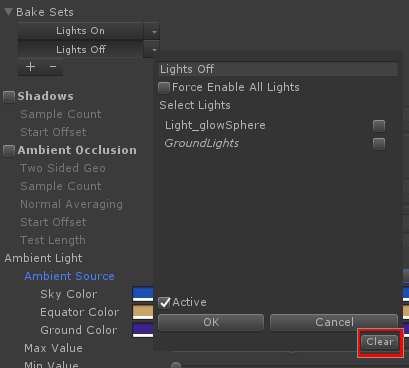 Finally you can always clear all data involved in the bake process by going to the bake folder and deleting the ‘BakeData’ asset. Baked data is stored in alongside the scene file in a folder named after the scene file. The baked data file contains the mesh data and any bake settings and bake-sets you have configured for this scene. 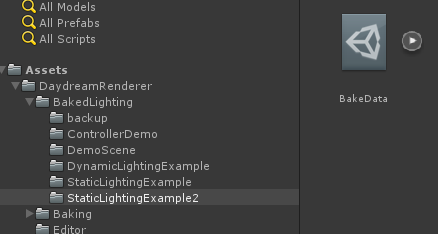 Daydream Renderer utilizes a custom lighting system for sorting lights and providing light data to shaders. This allows the renderer to seamlessly provide static vertex lighting support. In order for the lighting system to gather lights (and thus provide that data to materials/shaders) a component is added to each light to feed its data into the system. Also, a component is added to each object with a ‘Renderer’ component in order to feed the necessary object data into the lighting system. These components are auto-added at edit time only, not run time. If you have prefabs that are dynamically loaded at runtime you may need to drag them into the scene in order to automatically add the needed components and then ‘Apply’ the changes to the prefab, or attach the ‘Daydream Mesh Renderer’ and ‘Daydream Light’ components through script as needed. 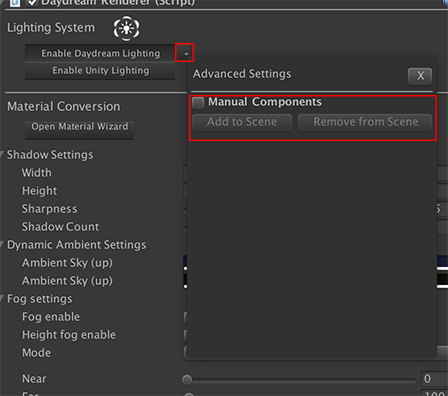 Toggle on the ‘Manual Components’ option to disable auto add, for convenience you can add and remove the lighting components from the scene using the ‘remove’ and ‘add’ buttons.

Show all projects by googlevr