A way to track unity menu navigation that doesn’t suck too much.

Managing the navigation of menu systems in unity is sucky. It shouldn’t be. unity-menustack provides simple menu state tracking behaviours.

See the generated docs (raw or hosted) for more info!

By default, prefixing is enabled, but it costs us perf. To disable it, set MenuRoot.DisableRuntimeTagging to true

Prefixing allows the building of menus given just GameObject names. At runtime, Menu or OverlayMenu components are added to facilitate the actual behaviours we expect.

You can tune which prefixes the system uses with MenuRoot.MenuPrefix and MenuRoot.OverlayPrefix.

Since this is enabled by default, you don’t need to worry about manually adding Menu or MenuOverlay components yourself.

Overlays are regular menus, except they don’t hide the previous menu, they are displayed atop it

To use an overlay, simply prefix the name of a child menu with overlay.

Navigation provides wrappers around the MenuRoot.OpenAsync(Menu) and MenuRoot.CloseAsync() methods so you don’t have to!

See Assets/Examples/ComplexLayoutRigged.unity for an example.

That said, the general idea is as follows:

Here’s a button that’s configured as a BackMenuNavigator: 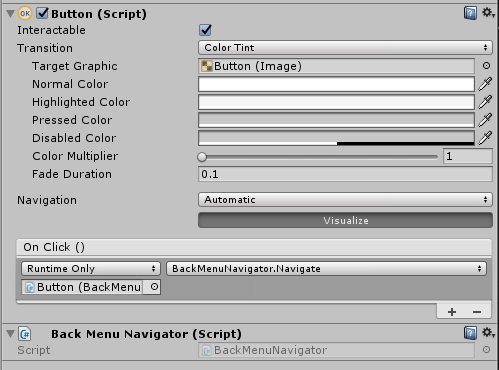 See Assets/Examples/AnimatedLayoutRigged.unity for an example.

That said, the general idea is as follows:

This will make your menus transition from Close to Open when they open, and Open to Close when they close.

Hierarchy viewer is currently a beta feature, and should be treated as such!

The included Window/MenuStack/Hierarchy panel can be used to visualize the menustack and control visibility of different menus to make them easier to work with. When using this view, all history is tracked, and can be Reverted with the Reset button. Further, changes can be saved with the Save Button. 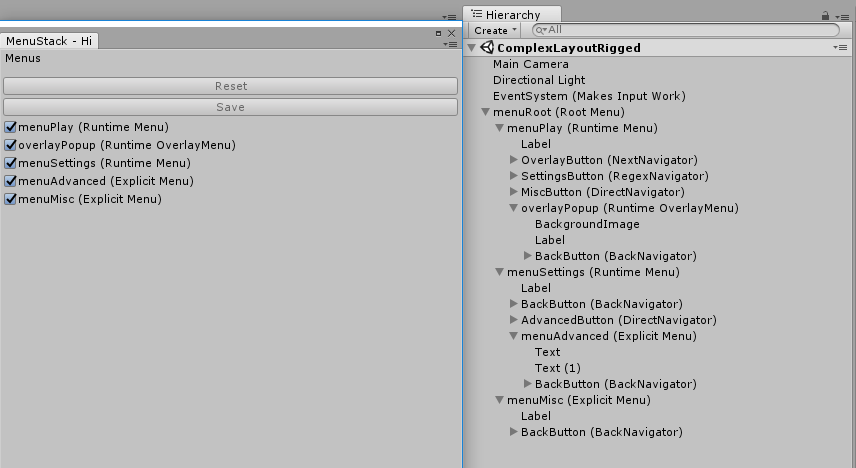 There’s a few examples under Assets/Examples. These should cover the major use cases and are fairly self explanatory. I’ll do some deep dive explanations in the near future.

Show all projects by bengreenier