Run Stickman Run is a game in which the player doesn’t take the control of a character but become a part of the game with the help of the kinect.

In this game, Stickman is a student that didn’t get a 20 to his 3DETech’s project which result to him failing his studies and being kicked out of his school.

Rejected by all, Stickman lost everything and became desperate to the point where his mind completly broke and made him lost all perspective to what is real and what is not.

Stickman is now completly paranoiac. He is stuck in his mind where everyone and everything is against him and try to hirt him. So he runs. He runs for his life without stopping. Without paying attention to the things on his path. The only way for him to get out of his internal jail, is to go through.

This is where the player come to use. The objective of the player is to help Stickman to go through his ennemies by modifying his environment.

The Kinect will allow some control on Stickman’s world that the player will use to clear or change Stickman’s path and protect him to allow him to come back to the real world.

In order to use this project, you will need a couple of things.

First of all, you will need to install Unity on your computer. The version that was used to make the project and test it was the version 5 - 2017.2.0f3. You can download a version of unity HERE

To get the project on your computer, you need to open a prompt, go to the folder you want to install the project, and type the following command:

Once the repository is cloned on your computer, you need to open unity and choose open a project.

Then you will need to select the folder where you cloned the project.

Unity will then open the project and to run it.

You will have to go to File -> click on Build settings

In scene to build add the scenes Menu and Blocs-Assembly, select your operating system and then click on build and run.

The game will then launch.

How to play to the game

When you will start the game you will start with Stickman running. As you enter the game, the kinect will detect the person that is the closest and choose him as the player. To be able to play correctly, be sure to have a clear space around the player.

When it is done, the player will have the control of the game with his two hands:

When you want to play with the keyboard, you will only have to use the mouse instead of your right hand and the left click of the mouse to grip the tools. The space bar will be used instead of the left hand in order to push the Stickman.

To give information to the player, there are icons on top of the screen.

The hearts on the left are the remaining life of the player. The Stickman can be only touch 3 times by his ennemies, otherwise the game is other and the player need to start from the beginning.

In the middle you have the tools. There are two tools that the player can use to help the stickman:

The Stickman has four type of ennemies that can hirt him:

The player can interact with two types of blocks: 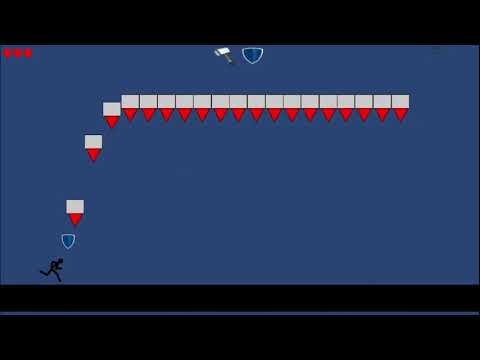 Show all projects by gbaelen