A code generation tool for Unity that can convert a declarative PlayMaker FSM into a pure C# finite state machine.

Note: This tool will not convert a regular PlayMaker FSM containing standard actions into C# code. See PlayMaker Comparison below.

Coding a finite state machine by hand is tedious. And error prone. Usually we just get lazy and throw a bunch of if-then-else statements in a function and hope for the best.

There are great libraries for building an FSM in code (see https://github.com/dotnet-state-machine/stateless), but I still find the machine definitions hard to understand despite the syntactic sugar.

Thankfully there is a great visual FSM designer on the Unity asset store: PlayMaker.

PlayMaker is awesome at what it does: visual imperative coding. But it won’t help you if you are a programmer trying to manage the complexity of your C# code. You’re still stuck writing an FSM by hand, or accepting a fragile approximation via if-then-else statements littered everywhere.

Wouldn’t it be great if you could visually design this:

And through some hand-wavy magic end up with this: 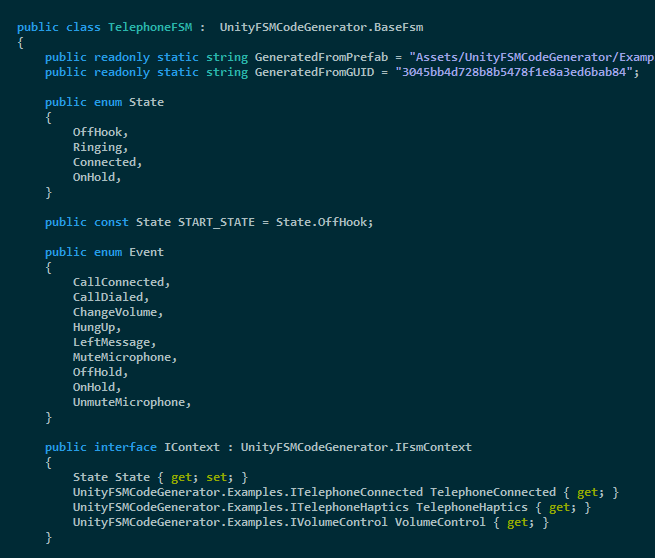 And not be forced by hand to write this: 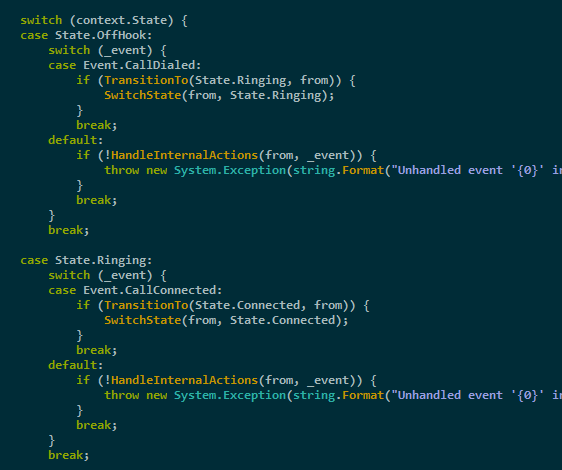 Just to call your fancy well-architected code like this: 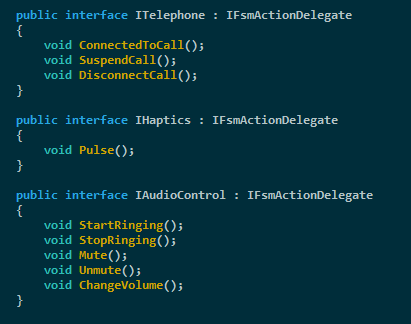 Well now you can!

This library contains a collection of custom PlayMaker actions you can use to define a declarative FSM – i.e. one that defines the logic of what you want do and when, but does not itself contain the how. That sounds kind of pointless, but in practice it means you let the FSM deal with all the annoying if-then-else state management and you write the fun stuff.

The FSMs generated by this library are themselves completely stateless. You provide interface implementations via simple dependency injection, a place to store the state, call SendEvent in response to external stimuli, and like boring magic your methods get called when they should.

Additionally there is no reflection used at runtime (only when parsing and building the FSM in the editor), so interface method calls are inlined and easy to debug in the generated code. Garbage is also not generated as the queued event system under the hood pools the allocated classes.

Once a C# FSM is generated from a PlayMaker FSM, you can copy and paste and share the C# FSM code as it has zero dependencies on PlayMaker (or even Unity).

Additionally, if you are persistent and don’t own a copy of PlayMaker (get it, seriously), you can manually create the data model used by the code generator. I wouldn’t recommend it though. It’s possible I could implement an add-on to the tool that could parse out a Mechanim state machine and give roughly the same workflow as the PlayMaker one, but don’t count on it.

The intended workflow when using this library would be that you colocate your generated FSM C# script right next to the GameObject prefab continaing your PlayMakerFSM, and put them both wherever you put your other C# scripts.

For instance, you might design an enemy Orc in this way:

If you are a hands on learner, see the telephone example that comes bundled with this project.

The project contains an implementation of a simple telephone similar to the phone call example in stateless but with sounds, animation, pixel art, and UI buttons to control the phone. I mean, we’re game developers right? Why not have all that stuff.

It’s immediately noticeable looking at Telephone.cs that there are almost zero if-then-else checks related to the state that the telephone is in. The generated FSM TelephoneFSM.Generated.cs takes care of all that tedium and only the interesting stuff remains in Telephone.cs. Even handling UI events like button clicks are as simple as calling SendEvent on the FSM.

Note: You will need your own copy of PlayMaker to be able to modify or view the visual FSM, but the example will work perfectly fine without it.

Note: Right now the editor side of things is using the CompilationPipeline class added in Unity 2017.3. I will try and kludge together a fallback option for older versions of Unity.

There is a FsmViewer component you can add to a GameObject that will automatically discover and show information for any FSMs on that GameObject. All you need to do is have your MonoBehaviour inherit IHaveBaseFsms and FsmViewer will take care of the rest. For an FSM to be found it must also have been generated with ‘Enable Introspection Support’ in the PlayMakerCodeGenerator compiler options.

If you have PlayMaker installed, FsmViewer will even locate the original prefab the generated FSM was made from and let you use the PlayMaker UI to visually view the state of the FSM. You can even use the PlayMaker GUI to set breakpoints in the native FSM! 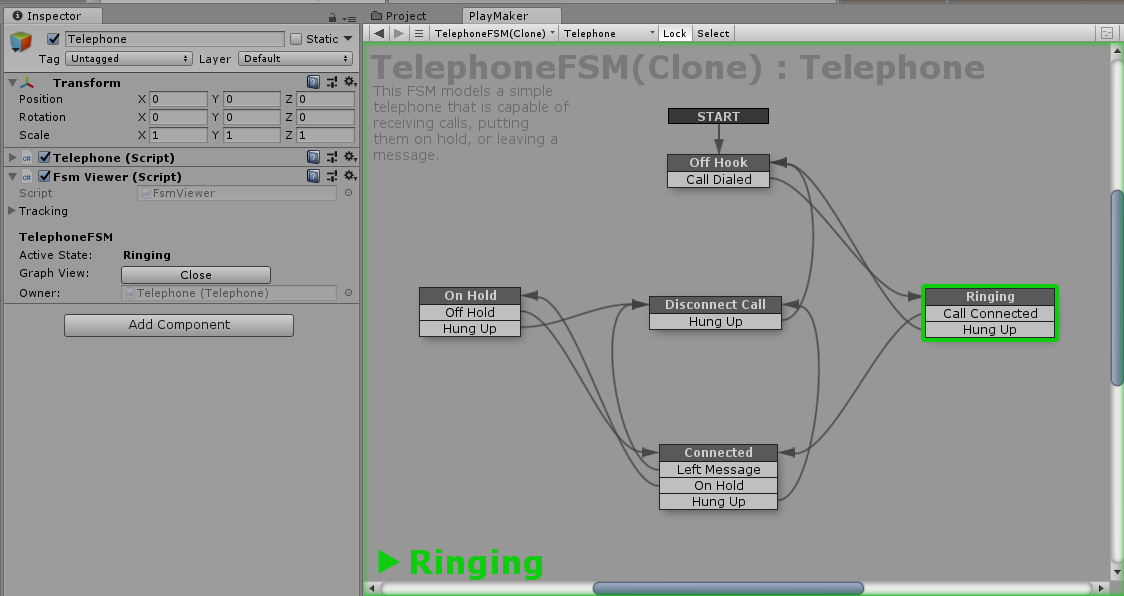 Show all projects by justonia