A libpd wrapper for Unity.

LibPdIntegration offers a couple of features which set it apart from existing implementations of libpd for Unity:

This repository contains everything you need to incorporate Pd patches into your Unity project. First download it from the releases page, then copy the contents of the Assets folder into your project’s Assets folder. LibPdIntegration provides native libpd binaries for supported platforms in the Plugins subfolder, and a single C# script, LibPdInstance.cs in the Scripts subfolder.

PD patches should be placed in the StreamingAssets/PdAssets folder (you can create your own subfolders within).

Lib Pd Instance is our wrapper for libpd. To associate a Pd patch with it, drag the patch from your StreamingAssets/PdAssets folder to the Patch selector in the Inspector.

Note that the order of Components matters. Audio Source must come before Lib Pd Instance.

The Pipe Print To Console toggle provided by Lib Pd Instance lets you pipe any print messages sent by your Pd patch to Unity’s console for debugging purposes. Note that due to a limitation with libpd, this toggle is global. i.e. if you activate it for one Lib Pd Instance, it will be active for all Lib Pd Instances.

See the sister project LibPdIntegrationExamples and the wiki for more information, including how to communicate between Unity and libpd. And there’s also Yann Seznec’s excellent introductory videos on youtube.

Note: If building for mac, Unity may complain about conflicting versions of libpd. This is because Unity mistakenly assumes the 64-bit Linux lipbd binary is actually a mac binary. To rectify the issue, select the 64-bit linux binary (Assets/Plugins/x64/libpd.so) and uncheck the Mac OS X x64 toggle in the Inspector to match the following image, then click Apply: 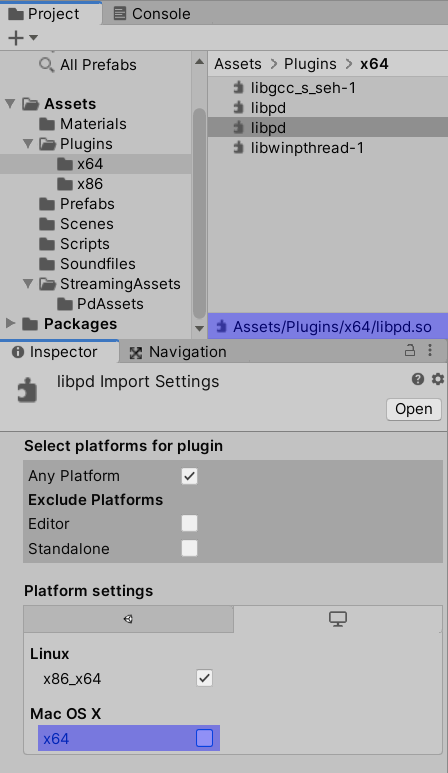 Spatialisation of Pure Data patches in Unity is a little convoluted. The following describes a method that does not require any external frameworks, but do check out the Spatialisation page on the wiki if you happen to be using an external audio framework like Steam Audio. The process is a bit more straightforward in that case.

For this method we need to use a special sound file (included in this repository) in our Audio Source, and use an adc~ object in our PD patch to apply the Audio Source spatialisation to the output of our PD patch.

The necessary steps are:

Multiply the output of your patch with the stereo input from an adc~ object, like the section highlighted in blue here: 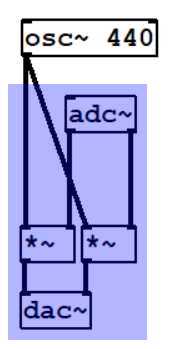 This will effectively apply the spatialisation that Unity applies to Audio Sources by default, to the output of our PD patch. For more information, see the LibPdIntegrationExamples project, and particularly the comments in the FilteredNoise-ADC.pd patch.

As mentioned above, libpd has to be built separately for every platform you want to deploy to. As the sole maintainer I (Niall Moody) currently only have access to a Windows machine, and have to rely on contributions from other people in order to support other platforms.

One thing I would like to do is set up a schedule for updating the repo’s libpd binaries to better track libpd/pure data’s own release schedules. In order to do that though, I’ll need other people to step up and maintain the non-Windows platforms. This should be a straightforward process of just building the latest libpd every 6 months or so.

If you’re interested and available, please get in touch.

LibPdIntegration is developed by Niall Moody, with assistance from Yann Seznec. It is licensed under the MIT License.

Show all projects by LibPdIntegration