U Texture Send Receive by BarakChamo - 1

This is a small package that provides a threaded interface for sending and receiving any Unity texture over TCP/IP. It can be used to stream video, webcams as well as any 2D or Render texture, like parts of your visuals, minimaps, etc.

To install the package head to the releases section and download the latest release .unitypackage.

Follow these instructions to import the custom package into your project. The package should show up under TextureSendReceive in your project’s Assets folder. 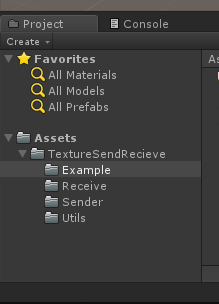 Example usage scenes are provided in the Example folder and show a range of use cases for the libary, how to set up streaming and how to use incoming textures in Unity scenes.

All projects are set up with a sender and a receiver and a 20,000-count particle-system that runs smoothly when sending and receiving 720p video on an MSI laptop with a 260GhZ i7 and GTX970M running Windows 10.

The webcam example sends a receives a WebCamTexure and is included with a small utility to capture webcam textures and select the webcam you want to use.

Check out the WebcamSender file to learn how to use uTextureSendReceive with a webcam and Unity’s WebCamTexture.

The video file example sends a receives a RenderTexture from a VideoPlayer.

Check out the VideoFileSender file to learn how to use uTextureSendReceive with a VideoPlayer, VideoClips and Unity’s RenderTexture mode for video playback.

The camera example sends a receives an in-game camera RenderTexture from a Camera aimed at the test particle system.

Check out the CameraSender file to learn how to use uTextureSendReceive with a Camera and Unity’s RenderTexture mode for streaming the view from in-game cameras.

To begin using the package add a TextureReceiver or TextureSender component to your project. Both components share some common properties, such as the port used for TCP/IP connection and the Message byte length that indicates the size of each video chunk sent and received.

All classes and properties are encapsulated under the TextureSendReceive namespace.

The texture sender component accepts connection from receivers for streaming and, encodes textures and sends them over TCP/IP. Once the sendTexture, an instance of 2DTexture, is assigned with a SetSourceTexture(Texture2D sendTexture) the TextureSender will send the contents of the texture once per frame.

Begin by adding a TextureSender component to a new or existing GameObject and configure the port and Encoding. By default, the component is configured to encode textures as JPGs. It’s recommended that you stick to JPGs unless strictly required as this cuts the encoding size by roughly half.

Streaming a texture is done in code and only requires a single line for setting the streaming source texture. The SetSourceTexture(Texture2D sendTexutre) accepts an instance or 2DTexture and will continuously read from it once it’s initialized.

The texture sender component connects to remote senders and accepts texture frames over TCP/IP, currently there’s no distinction between senders to handle multiple sources but that might change in the future.

Once the receiveTexture, an instance of 2DTexture, is assigned with a SetTargetTexture(Texture2D sendTexture) the TextureReceiver will write each received frame to the target texture. Note that the texture will be automatically resized to fit the received frame.

Begin by adding a TextureReceiver component to a new or existing GameObject and configure the ip, port and Encoding. By default, the component is configured to send over localhost (127.0.0.1) and you can see a working setup of local streaming in the example scenes.

Receiving a texture, like streaming, is done in code and only requires a single line for setting the target receiving texture. The SetTargetTexture(Texture2D sendTexutre) accepts an instance or 2DTexture and will continuously write to it as new frames are received.

You can initialize as many TextureReceiver and TextureSenders as you want and handle more than one receiving or sending source. An example for multi-sending and multi-receiving will be added soon.

The source and target textures can be swapped on the fly by making calls to SetSourceTexture and SetTargetTexture at runtime.

Made by Barak Chamo, released under MIT License.

Show all projects by BarakChamo