Skinner is a collection of special effects that use vertices of an animating skinned mesh as emitting points. It uses a special [replacement shader] ShaderRep to convert vertex positions into GPU-friendly data, and thus it avoids spending extra memory and CPU time for handling them (uses GPU resources instead).

A Skinner model is a simplified variant of a mesh asset that only has vertices and skin weights. All topological data of triangles are removed, and also overlapped vertices are stripped out when converted from an original mesh.

A Skinner template is a pre-built mesh asset that provides vertices and topological data to the effect renderers. For instance, a Skinner particle template has thousands of particle instances that are placed at the world origin; A Skinner particle renderer will move them at run time.

Skinner also provides some component classes to handle these asset during run time.

The Skinner source component is a subsystem that converts a deformed skinned mesh into baked data. This data will be provided to multiple Skinner renderers.

The Skinner renderer components are special types of mesh renderers that deform a Skinner template based on data provided from a Skinner source. Then it creates some interesting special effects.

How to Set Up

Download the package file from here and install it to a project.

Convert a skinned mesh into a skinner model.

Skinned mesh have to be converted into a Skinner model in advance to be used in the Skinner system. This can be done from the context menu; click a mesh asset to select, then choose Skinner -> Convert Mesh from the right click menu.

Note that the mesh asset is usually located inside a fbx file. A few extra clicks are needed to select it. See the GIF below.

Set up a character as usual.

Drag and drop a character prefab to the scene.

Attach a Skinner source to a skinned mesh renderer.

Add a Skinner source component to the game object that has a skinned mesh renderer component. Then set the Skinner model converted in the previous step to the model property. 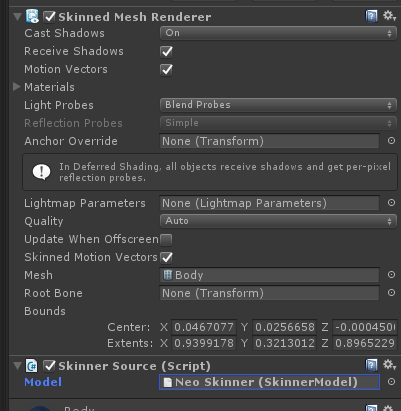 This Skinner source will override the skinned mesh renderer and then use it to convert vertex data. Note that this character will disappear from the scene, because it will be exclusively used for vertex conversion. If it has to keep visible, another instance of the same character should be added to the scene as a substitution.

Create an empty game object and add one of the Skinner renderer components to it. Then set the source property in it to refer to the Skinner source object created in the previous step.

For starters, it’s recommended to use the Skinner debug component that simply visualizes the vertex data provided from the source. If it shows nothing, there may be something wrong in the previous steps.

The Skinner glitch renderer draws triangles between randomly choosen vertices in a source. Although the number of triangles is fixed (21,845 triangles), triangles with long edge or large area will be culled out to keep the silhouette. This behavior can be controlled by the threshold properties in the component.

The Skinner particle is a particle system that emits particles from vertices in a source. The several parameters (duration, rotation, etc) of each particle can be changed according to the speed of vertices, and thus it can be used to give some emphasis to character movement and trajectory.

The shapes of particles are defined in a Skinner particle template asset. Any shape can be used in a template, but it’s recommended to use meshes with very low poly count, because the number of particle instances is determined from the number of vertices in the shapes (low poly == more particles!).

The Skinner trail renderer draws trail lines from vertices in a source. The width of the lines can be changed according to the speed of vertices, and thus it can be used to give emphasis to movement too.

At the moment Skinner is only tested on Windows, macOS and iOS (metal). Possibly it runs on PS4 and Xboxone, but not sure about GLES3 and WebGL.

Show all projects by pszpiczakowski