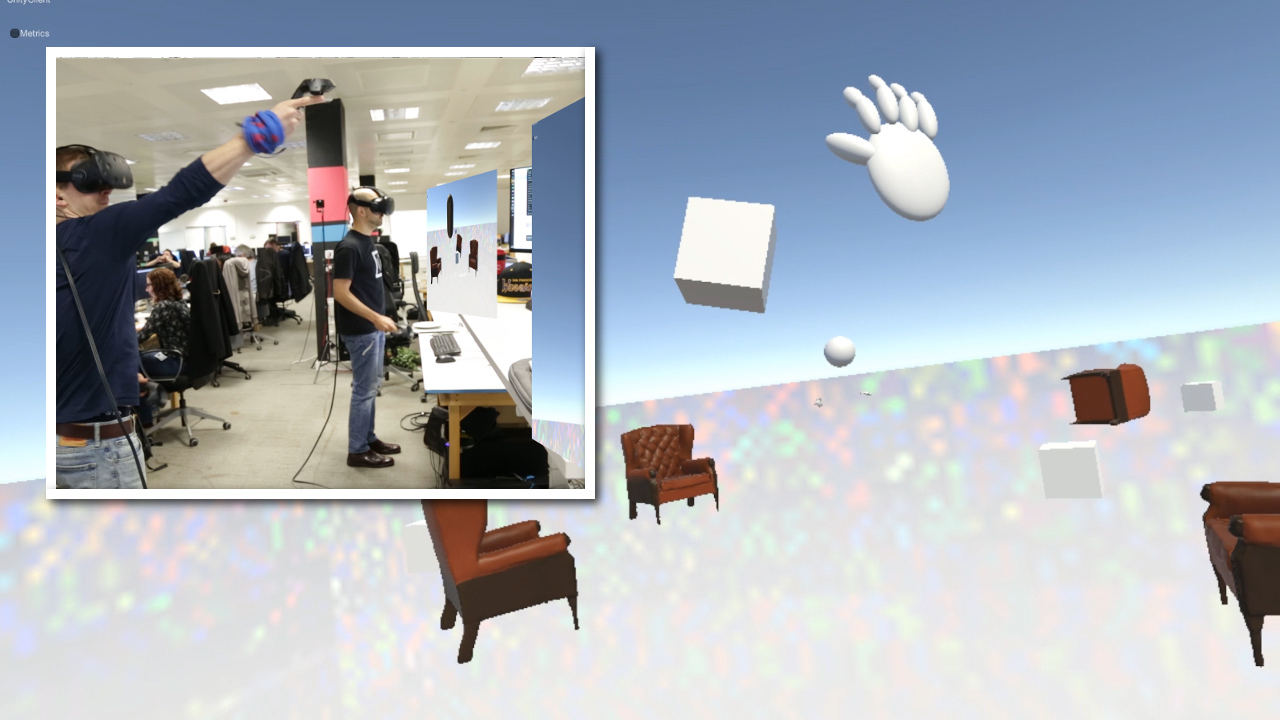 This is a SpatialOS project that implements basic functionality for a VR game or application, intended as a starting point for developing your own. It requires SteamVR hardware (the HTC Vive headset, controllers, and base stations).

The main features of this project are:

If you run into problems, or want to give us feedback, please visit the SpatialOS forums.

To deploy the project to the cloud, first build it by running spatial worker build -t=deployment, then upload the assembly with spatial cloud upload <assembly name>, and finally deploy it with spatial cloud launch <assembly name> <launch configuration file> <deployment name> --snapshot=<snapshot file>. You can obtain and share links to connect to the deployment from the console. See the documentation for more details.

The player is represented by an entity. Its position corresponds to the centre of the Vive’s play area, an abstraction that represents the physical space that is tracked by the base stations.

This approach to the player’s position is specific to the HTC Vive with its play area. A more usual approach for SpatialOS would have the position of the player entity match the position of the player’s head; however, the approach used in this project has several advantages, including a more straightforward implementation, lower bandwidth requirements (since offsets can be transmitted using smaller data types than absolute world positions), and a familiar model for experienced SteamVR developers.

The main downside is that physically moving within the play area will not cause the player entity to move when seen on the Inspector. This may not matter much, since the the SpatialOS world will normally be orders of magnitude bigger than the average living room, so most of the player movement will be done by teleporting. We may revisit this design tradeoff in future iterations of this project.

Should the framerate not update fast enough for your hardware, you can change the default framerate in workers/unity/Assets/Gamelogic/Global/SimulationSettings.cs

Entities can be easily marked as grabbable, which lets them be picked up, dropped and thrown. When the client detects a collision between a controller and a grabbable object, it adds it to a set of reachable objects; when the collision ends, the object is removed (by keeping this set, we avoid having to search for nearby objects constantly). The closest reachable object is highlighted by being made blue. This is done in HandCollisionHandler.cs, and happens entirely on the client.

When the trackpad is pressed, a GrabRequestEvent with the entity ID of the closest reachable object is emitted by GrabbingSender.cs on the client side. This event is handled by GrabbingReceiver.cs on the server side. It validates the grab attempt (that is, verifies that the hand and the object are actually colliding). If it is valid, it updates the CurrentGrabberInfo property of the Grabbable component to record which player and controller is grabbing it. When the trackpad is released, a very similar process handles dropping an object that is being held.

Show all projects by spatialos