Using this project in any test- or productive-environment is at your own discretion!

This project is still in heavy developement and large parts may change at any point in time.

7. FAQ
7.1 Which is the correct IsServer I should use?
7.2 My Scene is not being created or a wrong scene is created.

This project is an alternative implementation of the standard NetworkManager that comes out-of-the-box with Forge Networking Remastered as an attempt to provide functionality like a persistent world, dungeon instancing or the concept or ‘rooms’ in one or more servers.

When to use it?

When not to use it?

Additionally, at the time of writing the native Steam-Integration of the standard NetworkManager, the standard implementation of a MasterServer, compatability with the Webserver or Matchmaking in Forge Networking Remastered are not integrated. While these features might be implemented at a later time please know that you will need to provide them yourself currently.

Be aware that if you want to use this over the standard NetworkManager or not depends on the scope and features of your own project and is at your own discretion.

I recommend at least Unity 2018.3.6f1. If you have issues try upgrading to this or a higher version of Unity. 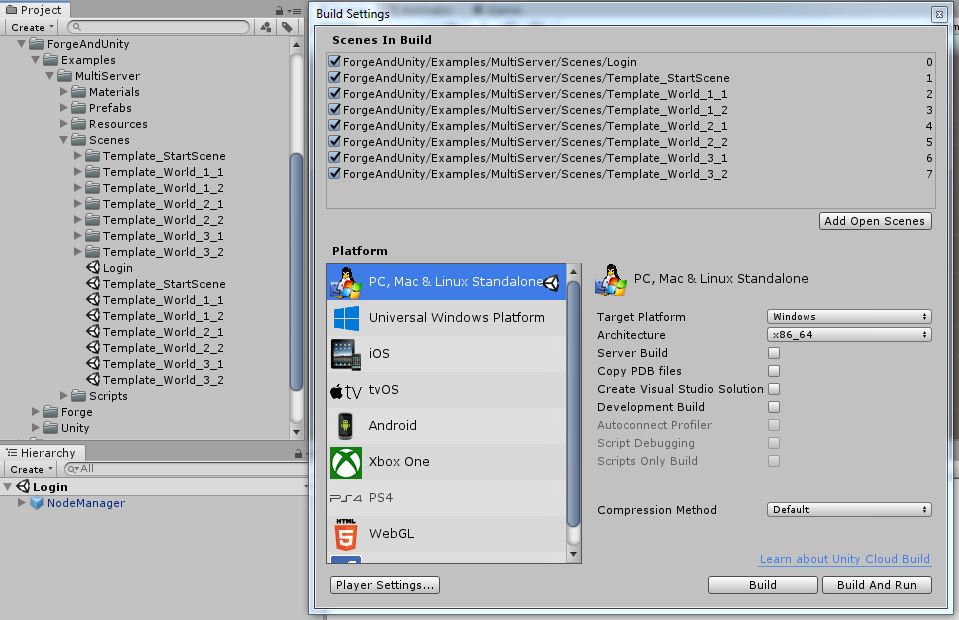 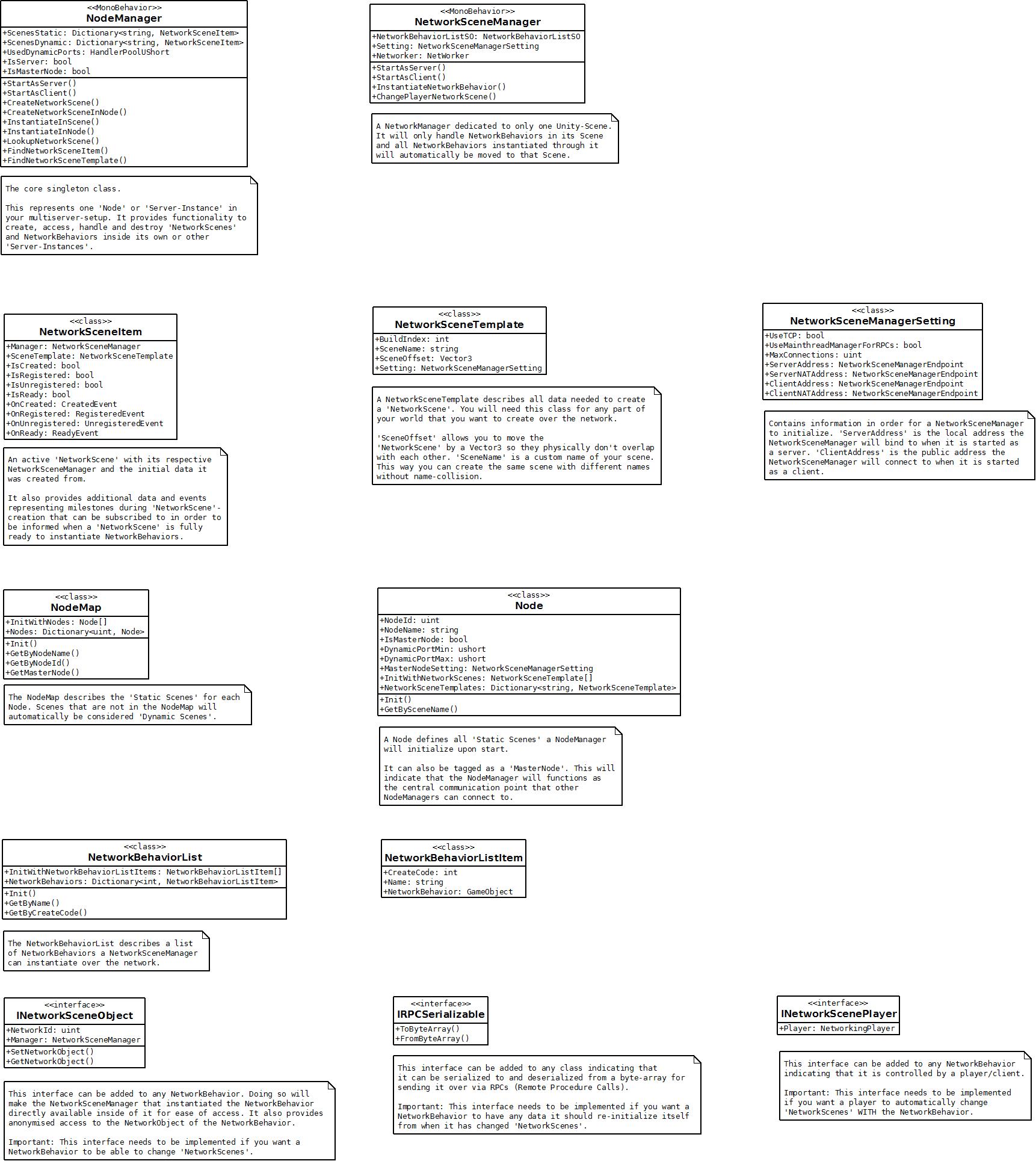 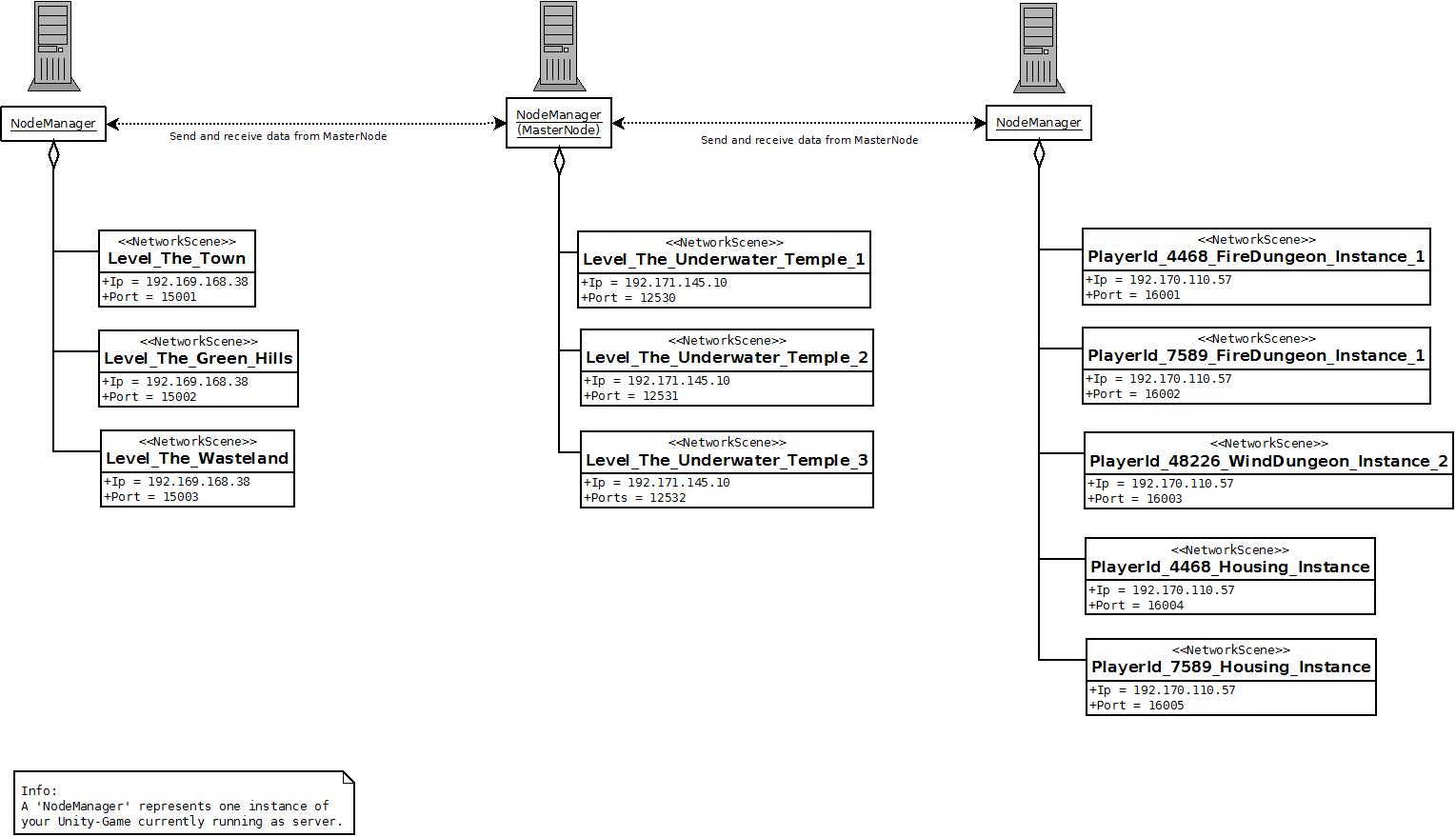 First you set up the connection-information. Then you set the BuildIndex of the scene you want to create as a NetworkScene. Finally, you choose a custom-name for your NetworkScene. The NodeManager will do the rest for you.

You can have 500 NetworkScenes of the same BuildIndex as long as they all have unique custom-names - this is especially important when creating dungeon-instances where you want to create the same dungeon over and over for different players. To take it even one step further you can hook up to events that will be emitted during scene-creation. This lets you know when exactly your scene is ready to instantiate your NetworkBehaviors:

Create a NetworkScene on another Server

Creating a NetworkScene on another server is pretty easy and very similar to creating it locally as shown below:

You will need to know the NodeId of the server you want to create the NetworkScene in. You can set each NodeId on the NodeMap (see 3.4 NodeMaps for more information). Also be aware that you need to have at least one NodeManager running as a MasterNode as otherwise no Server-To-Server communication can happen. You can set a Node as IsMasterNode in the NodeMap of the NodeManager.

As with locally creating a NetworkScene we also have the option to hook up on events to know if anything went wrong or the scene has been created successfully:

Altough it involves a bit more code we can still check for success!

You can instantiate new NetworkBehaviors as shown below:

If you prefer readability you can also instantiate via name:

Instantiating a new NetworkBehavior on another server is very similar to instantiating it locally as shown below:

As we sometimes need to make sure that something is successfully instantiated on another server we have the option to hook up on events to get notified on success or failure:

Transport the Player to another NetworkScene on any Server

Transferring a player to another NetworkScene has many obstacles we need to overcome. Timouts, errors, what if the NetworkScene is not there anymore? The NetworkSceneTeleporter is a prefab that already handles these things out-of-the box and gives you a starting point to implement your own logic if you want to.

What does the NodeManager do?

The NodeManager helps you with the following tasks:

The NodeManager is the central point for creating, removing and looking up NetworkScenes. It supports you with several helper-functions like FindNetworkSceneItem() or FindNetworkSceneTemplate() to make handling all your scenes easier. It exposes a variety of events for you within NetworkScene-creation and NetworkBehavior-instantiaton.

You can start the NodeManager as a server or a client through its respective StartAsServer()- or StartAsClient()-functions. 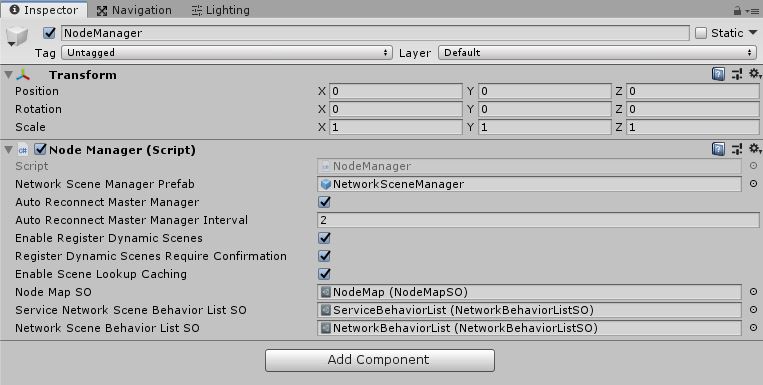 In order for NetworkBehaviors and especially Players to move across server-instances we need Server-To-Server communication so that if a Player in ‘Server A’ moves to ‘Server B’ the data of the Player can be properly transmitted.

How do servers communicate with each other you might ask? The answer to that would be very simple: all servers play their own little Forge-Game to transmit information with each other where one server is the host (the MasterNode) and the other servers are the clients. The NetworkSceneManager for this game is located on NodeManager.MasterManager.

Additionally, if you look at the NodeService-Script that is currently used for Server-To-Server communication you will find that it is just a simple NetworkBehavior instantiated like any other on the game that the servers are playing with each other.

This gives you all the flexibility of Forge Networking Remastered to extend Server-To-Server communication without introducing extra logic or restrictions. If you want the servers to communicate more information or add stuff like database-functionality across servers you can just make a NetworkBehavior and instantiate it on the game the servers are playing with each other - easy as that!

NodeMaps describe all Nodes with their respective NetworkScenes that a NodeManager should instantiate. Theese NetworkScenes are guaranteed to always be reachable under a certain Ip or Port and thus form your ‘persistent world’ or ‘overworld’ - they are refered to as static NetworkScenes. Every NodeManager needs a NodeMap to start. You can create a NodeMap by right-clicking in your project-window and choosing ‘Create > ForgeAndUnity > NodeMapSO’ as shown below: 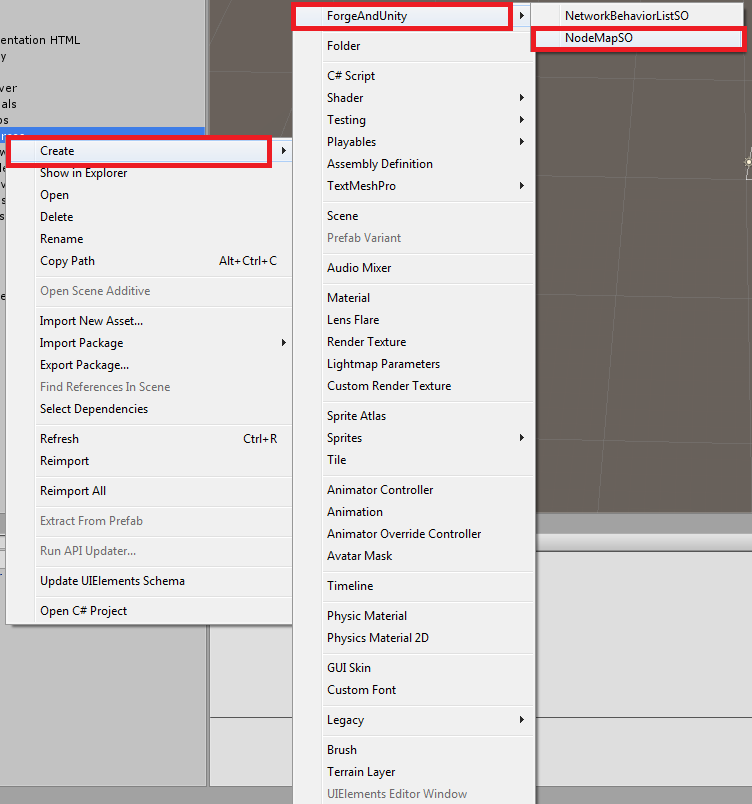 This will create a Scriptable-Object holding your NodeMap that you can edit and assign to the NodeManager.

What does the NetworkSceneManager do? 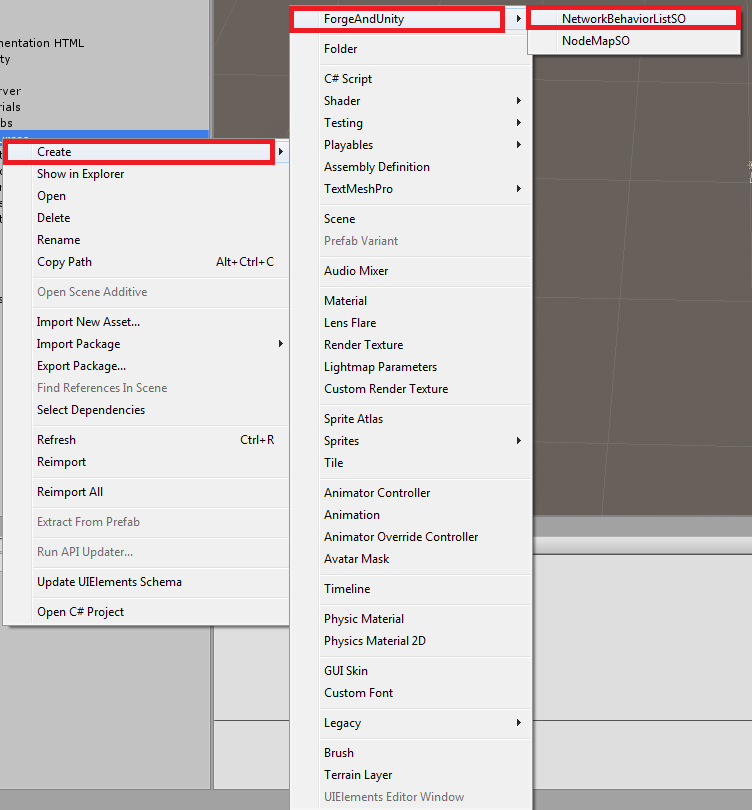 You can change and extend most of the code from the project without touching the core-files. Nearly everything in the NodeManager and NetworkSceneManager for example is marked as virtual and you are encouraged to derive from these classes and override them or extend parts and functions according to your project. Even the Prefabs that come with the project like the NetworkSceneTeleporter have all their functions marked as virtual so you can quickly extend them.

Also note that the NodeManager has a public parameter for providing your own NetworkSceneManager-Prefab that it should instantiate for all NetworkScenes which makes it even more easy to provide your custom-logic.

TL;DR: You can and should derive from all classes. You are encouraged to change bits and parts depending on the needs of your game!

Explanation:
To create a new NetworkScene the framework will first create an empty Unity-Scene with your desired scene-name (here ‘Level_1’) and put a NetworkSceneManager in it so it can be connected to.

Info: This is more reserved for the end of your project so don’t overstress it.

All internal serialization of data is currently done via C#s BitFormatter which is very flexible and undemanding in what it can serialize and deserialize but an atrocity in efficiency and performance. I just want to mention that you might want to switch to a different serializer at some point in time like MsgPack, Ceras or ZeroFormatter.

Info: The NetworkSceneTemplate.SceneOffset allows a NetworkScene to be created with an offset so that it does not physically overlap with existing scenes.

Be aware that when you create a dynamic scene like a new dungeon instance or a player housing instance that the NetworkSceneTemplate.SceneOffset will not move the NavMesh associated with the scene. I recommend using the NavMeshTools from Unity to be able to create NavMeshes during runtime solve this problem.

Info: The NetworkSceneTemplate.SceneOffset allows a NetworkScene to be created with an offset so that it does not physically overlap with existing scenes.

Be aware that when you create a dynamic scene like a new dungeon instance or a player housing instance that the NetworkSceneTemplate.SceneOffset can’t be properly applied to the Unity-Scene when the GameObjects of the Unity-Scene are marked as static.

Which is the correct IsServer I should use?

To check if you are the server or the client you can either globally check for NodeManager.IsServer or locally check for networkObject.IsServer in your NetworkBehaviors from Forge Networking Remastered.

My Scene is not being created or a wrong scene is created.

Also make sure you have the correct BuildIndex when creating your NetworkScene.

Show all projects by k77torpedo