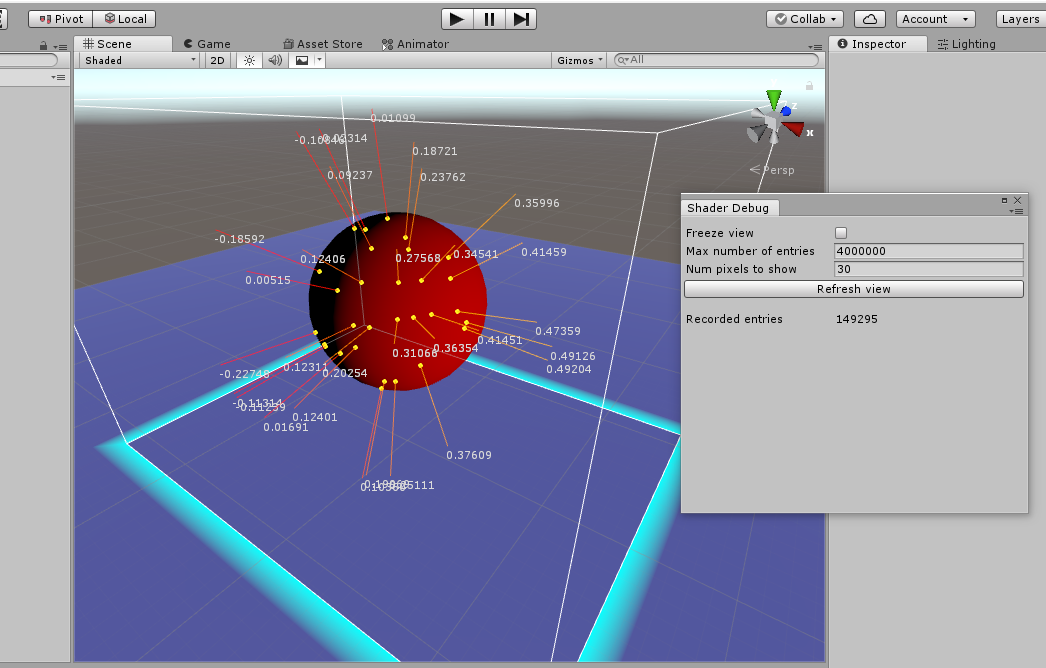 We have a custom fragment shader rendering the red ball, and the goal is to debug it. We add a few lines to it (see below) and then choose “Window”, “Shader Debugger” in the Unity menus. A small number of pixels that use this shader are automatically sampled and displayed as yellow dots. For each yellow dot, the extra information that we chose to record from the pixel shader is displayed.

In this case, this info is (what we think to be) the normal vector, displayed in a color between red and orange; and add at the end of that vector, a custom label with some numerical value. This is done by writing the following code in the pixel shader (this example comes from the Demo directory):

Note that this only works in the Scene view, not in the Game view (nor in builds).

NEW (oct. 2019): it also supports vertex shaders. See the demo in the directory “Demo Vertex”. The main difference is that you need to call DebugVertexO4() and not DebugFragment().

NEW (sept. 2019): it also works with post-processing or image effect shaders. See the demos in the directories “Demo” and “Demo PostProcessing”.

In general, we must call uint root = DebugFragment(i.vertex); once in a fragment or post-processing shader, or uint root = DebugVertexO4(i.vertex); once in a vertex shader. Then we can call any number of DbgXxx() functions by passing the root value as first argument. The whole list of supported functions is in debugger.cginc. (If you need to add more, you need to edit that place as well as DisplayHandle() in ShaderDebugger.cs. Please issue pull requests if you add something generally useful!)

Note the naming convention: function names ending in O4 or W4 expect coordinates as float4 in object or world space, respectively. Function names ending in O3 or W3 are the same but expecting a float3, and interpret it as a vector instead of a position. There is a “current” position and color which affect what you draw next; you can change it with DbgChangePosXxx() and DbgSetColor(). In the example above, the final DbgValue1() writes one float numerically on screen, at the position that was just changed in the previous line.

You should remember to remove or comment out all the code from the shader—including the #include "debugger.cginc"— when you are done.

If the shader is more complicated, just make sure you call DebugFrament() once, typically at the start of the fragement function, and then pass around the root variable to all places where you need DbgXxx(). Feel free to add conditions, like if (x < 0) DbgSetColor(root, float4(1,0,0,1)); to make the next thing red if x < 0. You’re writing a shader, but in this case you don’t have to worry about performance 😃

Show all projects by arigo