Especially for smaller teams, starting the iteration process for Timelines can be a little overwhelming. Do you start from a storyboard, an animatic? Do you just mess around inside of the Editor until you find an idea? Quite fortunately, screenplays are a pretty universal way of laying out a story, are pretty much always an early part of the pipeline for any bit of visual storytelling and while they might not get you all the way there if you’re laying out shots they’re a great way to break down a sequence into smaller components.

With this plugin, you can now parse screenplays and import them into Unity as a Timeline asset, will all the correct track types and bindings auto-generated for you.

Simply click on the Tools/Parse Screenplay menu item and select a .txt file anywhere on your computer. Most screenplays (quite obviously) conform to an industry standard so even the stuff you wrote previously should work out of the box.

This is what the plugin will parse:

The cuts and their lengths will be guestimated on the lenght of the action so while you’ll obviously have to do some adjustments afterwards it should get you started. A camera prefab is also created for each shot And signal and animation tracks are autogenerated for characters.

When in doubt, you can always refer to the Sample Screenplay included and the excellent screenwriting.info. 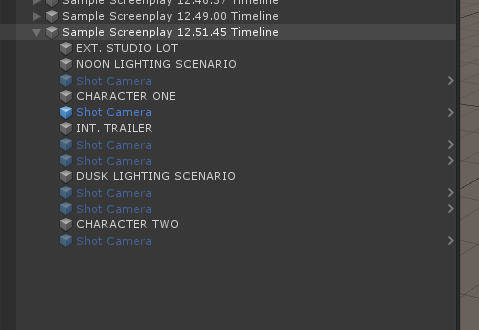 This is a plugin that makes use of Unity’s new Package Manager feature. Just drop the com.alexismorin.screenwriter folder into your packages folder (found at the same level as your Assets folder) and it should work out-of-the-box. If you’re using an older version of Unity, navigate inside the com.alexismorin.screenwriter folder and then just drag the contents you find there anywhere in your project hierarchy.

Show all projects by alexismorin