An analog synth in C# for Unity

Wavy McFormface is an analog synth that allows to to create and waveforms in real time.

Wavy offers a wealth of controls to edit and constomize your waveform. And, as if that weren’t enough, you can also edit your waveform at runtime using Wavy’s API!

Below we’ll step through the install process, how to create a waveform, the parts of a waveform, and how to use the editor UI and API to edit/modify your waveform.

This will put the Wavy McFormface directory in your project’s root directory - which is exactly what we want.

You may need to restart Unity for it to pick up that Wavy was added to the project.

To create a waveform simply select the Tools -> Wavy McFormface -> New Waveform Menu (or use the CTRL + ALT + SHIFT + W shortcut) and select where you’d like your waveform config to be saved. I’d recommend something like a Waveforms directory in your project root.

Once you click Save navigate to the created file. Note that a .asset file was created. This is important as assets files can be shared across multiple instances of Wavy McFormface scripts.

What is the difference between a script and an asset?

Wavy McFormface assets are called Configies and hold all the configuration data for a waveform. All the edits and update you make via the editor UI or API are maintained in the Configie.

Since the scene needs to be in Play Mode for Wavy to generate waveforms we really need to our edits to waveform Configies to persist beyond Play Mode. Assets are the best way to achieve this. Since an asset exists outside a scene it gets updated whether Unity is in Play Mode or not. Using assets for Configies means that you can enter Play Mode and get your waveform sounding exactly the say you want. When you exit Play Mode all your work will persist because it was saved against the Configie - not the GameObject the script is attached to.

Scripts are the logic that that uses a Configie to generate a waveform. Scripts get attached to GameObjects and require an Audio Source also be attached to the same GameObject as the script.

A script references a Configie (as is shown in the Configie and Master Volume section below).

Importantly, you can edit a Configie either by editing the asset directly, or by using the script - both editors do the same thing. Most of the time you’ll likely use the script editor UI to edit the Configie while in Play Mode.

There are several sections of the editor UI, each with their own purpose. Below we go through each section in turn.

Before diving into the details of each section, we’ll cover some basics

AnimationCurve, Float, Range, and Integer property types may be edited in real time while in Play Mode. Time properties may not be edited from Play Mode.

The single Integer property is:

The two Range properties are:

The Envelope attack/decay times as well as the Wibble Wobble Time fields are all Time values and may not be edited in real time while in Play Mode.

Any section with a checkbox (Hamronics, Frequency Limit, Wibble Wobble, and Noise) may be enabled or disabled. You can enable/disable while in Play Mode.

The top-most section is where you specify which Configie a script is using, and set the Master Volume.

To change which Configie a script uses, simply select a different one from the component chooser.

The volume level for each wave type can be specified individually. The Master Volume raises or lowers all wave type volumes uniformly, and can be used as a cutoff to make sure the overall volume output nevers get beyond a desired threshold.

IMPORTANT NOTE The editor UI enforces a range of 0.0 - 1.0 for the value of the Master Volume. The API, because of the way Unity works, does not. Do not ever specify a Master Volume level above 1.0 as doing so may cause damage to your audio equipment and/or your ears. This is extremely serious.

This section allows you specify volume levels for all four wave types independently - play around with these to create something awesome and unique!

IMPORTANT NOTE The editor UI enforces a range of 0.0 - 1.0 for each of these values. The API, because of the way Unity works, does not. Do not ever specify a wave volume level above 1.0 as doing so may cause damage to your audio equipment and/or your ears. This is extremely serious. 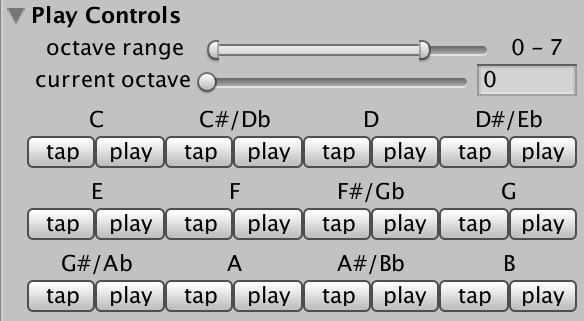 We’ll go through each item in turn:

The octave range specifies all octaves to render when Harmonics are active.

If Harmonics are not active this value is not used.

This slider selects the octave to use when generating your waveform. It is bounded by the values selected in the octave range.

The note grid is a collection of buttons allowing you to play your waveform to see how it sounds.

The tap buttons roughly simulate tapping a key on a keyboard to play your waveform. The formula used to determine how long to play when tapping is as follows: attack + attack. The note is played for twice the attack time - this provides enough time for the note to get to full volume, with a sustain equal to the attack time. When attack + attack time has passed, the note stops playing and the decay takes over. The note volume fades out according to the decay time and AnimationCurve specified.

IMPORTANT NOTE Only one note can play at a time. Pressing play on multiple notes will simply transition from the first note to the second - even though both buttons will say stop, only the most recent note selected will be playing.

The attack and decay time values specify how long their associated actions take to complete. Because of the way the waveform is generated at runtime, these values may not be edited while in Play Mode.

The Harmonics AnimationCurves allow you to specify how loud harmonic octaves should be relative to the current octave.

The grey bars behind the AnimationCurves show you where each rendered octave is at - making it easy to visually get an idea how loud each octave is. 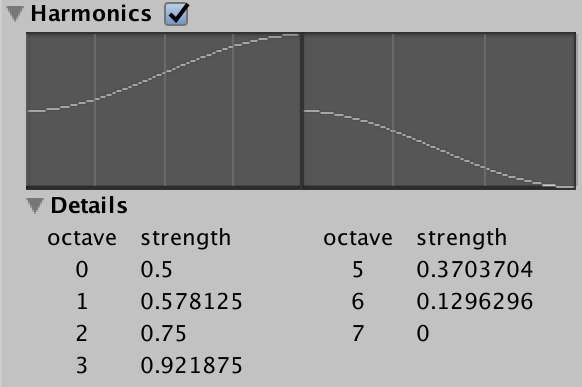 The Details section provides info on the volume level for each octave below and above the current octave.

The Frequency Limit curve is like an advanced volume control for all rendered frequencies of your waveform.

The grey bars behind the AnimationCurve show you where each rendered octave is at - making it easy to visually get an idea how loud each octave is.

Using the AnimationCurve you can control the volumes of every octave and note rendered in your waveform to a high degree of precision. 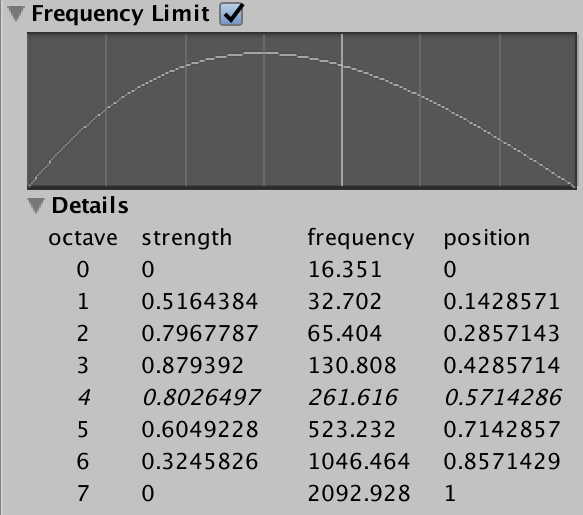 The Frequency Limit details shows the exact volume level of each rendered octave.

The volume range is between 0.0 (completely silent) and 1.0 (full volume).

This one is fun 🤘

The official name for this control in synth parlance is Pitch Bending, or portamento (usually using a Pitch Wheel) - but I didn’t know that when I was building this plugin so I called it Wibble Wobble (which is more fun anyway).

The Wibble Wibble uses an AnimationCurve to specify how to bend you’re waveform’s pitch. The bend pattern repeats according the the Time units specified.

The Noise section has three parts:

We’ll go through each part in reservse order as that will make more sense:

This AnimationCurve defines the pattern by which a waveform should deviate from it’s note over the course of a sample. This pattern will repeat for each call to OnAudioFilterRead (ie: sample). While this pattern does give shape and texture to your waveform, it is not the same as the Wibble Wobble pattern. This pattern is for providing suble texture changes and nuances in your waveform.

The level determines to what extent the pattern and variance distort the waveform. A value of 0 means the no distortion occurs. As the value increases, the waveform distortion becomes more intense.

A narrow variance range means the injected noise will only deviate slightly from the specified pattern. A wide variance means that more random noise deviations will be applied to the waveform as they will fall within the specified varaince range.

Additionally, you can control the tone of the variance by sliding the range up and down.

All properties available through the editor UI are also available via the API. For examples of API use, please see the Assets/Wavy McFormface/Examples directory (specifically the Scripts directory). These scenes are playable. To run them you will need the Standard Assets package installed.

There are two different speeds that Wavy lerps at when animating between property values:

All AnimationCurve properties lerp at the slow speed. This is to prevent audio artifacts like popping - which are caused by changing values too quickly.

Float properties lerp at the fast speed. This is because changes in these values can be animated faster without causing artifacts.

Show all projects by MayBGames