This Test Tool simplifies testing of Unity games and allows to run tests on mobile devices. It’s based on methods, attributes, and logs, similar to those in NUnit.

Just copy UITestTools folder and paste it wherever you want inside Assets folder of your project.

Flow Recorder is an Unity Editor extension that allows to record user actions and generate test’s source code from them.

To use Test Recorder navigate to Window => Ui test tools => Flow recorder, or press Ctrl+T for Windows and Cmd+T for Mac.

Each action contains the following information:

For example, if user clicked on UI text - all assertations that compare text labels become available. Common assertations, like Is Enable or Is Exist are available for any GameObject. By default, Flow Recorder supports only Unity UI raycast targets. If a support for GameObjects that don’t have any UI components attached or use of custom assertations is required you have to implement custom assertation method. Please read below how to extend UI Test Tool.

Launch the game from the editor, press Start Record button to start recording actions, perform any desired actions in the game window, then press Stop Record button to stop recording. You can change assertation types or parameters and change action order during the test recording or any time after it. Press Generate Code and Copy to generate and obtain the source code for the test. Then you can paste the generated code to your own test class.

Also, you can create a new assertation with the object by making a Right Click on the object in the hierarchy view and then selecting Create Assertation, or you can select Copy Path if you want to copy the path to the object. 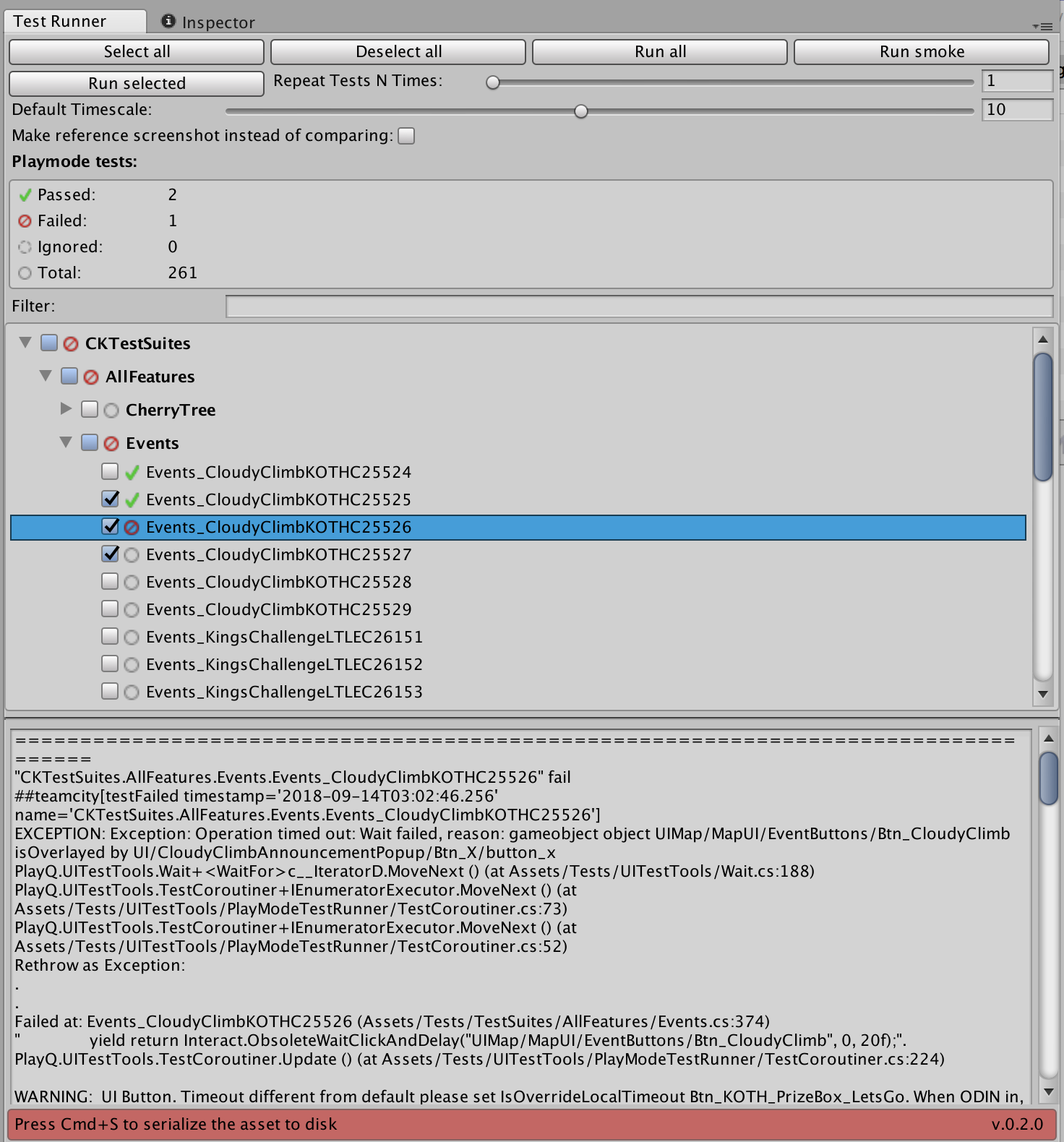 Test Runner searches the project for all methods with the attribute [UnityTest] and represents them as a tree structure with namespaces and classes as branches and methods as leaves. Press Run all to run all tests.

You can select the number of times each test is run by dragging the Repeat Tests N Times slider.

Also, you can change the TimeScale value applied to game environment before the test run by dragging the Default Timescale slider.

One of the greatest features of the Test Runner tool is that it allows to run tests directly on target devices. See command line arguments for it in Command line section.

You can select specific tests that you want to run and press the Run button. The set of selected tests is saved to UITestTools/PlayModeTestRunner/Resources/SelectedTests.asset scriptable object.

We have a possibility to use a Filter to search for tests. Just write the name or id of the test in the line.

You can run a single test by double clicking on test’s name.

You can mark any test with [SmokeTest] attribute. Clicking the Rum Smoke button allows to perform only tests marked with this attribute.

Sometimes, tests may succeed or fail depending on the different screen resolution. For example, the test checks whether a specific GameObject is located at the certain screen pixel coordinates. To ensure that the test is run only at the proper resolution you have to add [EditorResolutionAttribute] attribute above test method declaration and specify target resolution for Editor. It doesn’t affect tests that are performed on devices.

You add link to test description in TestRails with attribute TestRailAttribute. TestRailAttribute constructor takes 2 arguments: string subdomen and int testId. For example if link to your test looks like this:

where 12345 is some test id. Then you have to declare test method like that:

To use that link you have to right click on test name in TestRunner window and choose Open TestRail in context menu.

You can open test context menu by right click on it’s name in TestRunner window. 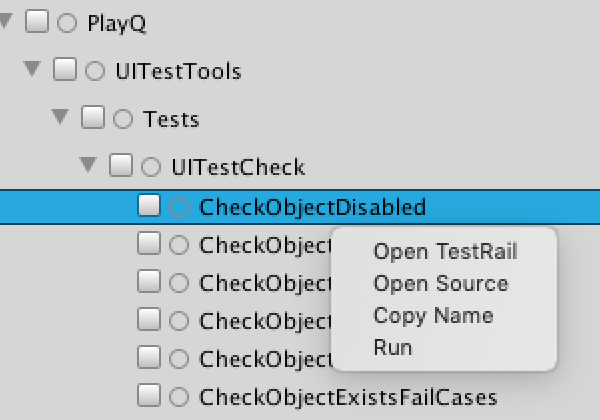 Test Helper navigate to Window => Helper that shows a list of possible assertations for the selected GameObject in Hierarchy and corresponding code lines next to them. In play mode Test Helper allows user to obtain the list of sound clips that are currently playing. 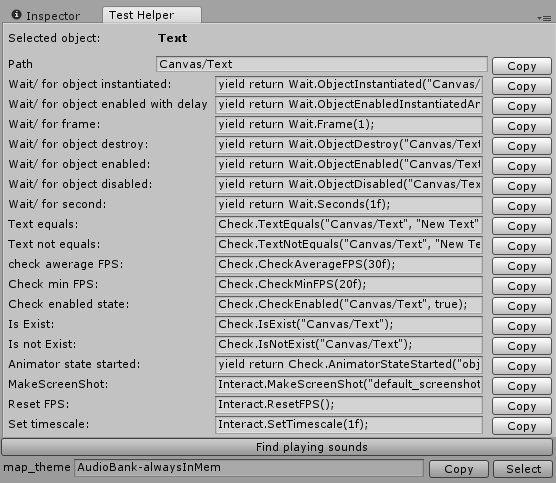 To run tests in Editor Mode via command line use the following command:

Arguments are equal in both methods.

Test Tool common actions are split to 5 static partial classes: Check, Wait, Interact, AsyncCheck and AsyncWait. Each of these classes contain a list of methods which perform a corresponding action like checking the state of the given object, waiting for specific condition or interacting with specific object.

Async actions allow user to delay their finish conditions check until the following actions are finished.

The following example shows how to create a simple assertation method, which retrieves GameObject from hierarchy by path that is passed as an argument, checks whether it has user-defined custom component LevelButton attached and checks the stars count on it. The method is placed its in own partial Check class.

The method is now available to be used in tests as an action:

Let’s create a class that informs Flow Recorder when and how it should display the action created in the previous code snippet. The class is required to be inherited from ShowHelperBase class and implement CreateGenerator() method. CreateGenerator method is responsible for defining which editable arguments the action has, their default values and how to generate its source code.

bool IsAvailable(GameObject go) method is overridable. It typically indicates whether an assertation is available for the current GameObject. By default it returns true, even if GameObject is null. User can override method Camera GetCamera() to specify which camera should be used by Flow Recorder to raytrace the desired GameObject.

User can override method Camera GetCamera() to specify which camera should be used by Flow Recorder to raytrace the desired GameObject. See more below.

Let’s bind our method to class.

The action can now be seen in Flow Recorder actions list as Check Start Count on Button upon clicking a GameObject with LevelButton component attached.

How Recording works with Assertations

Here’s an example of another assertation method which checks some specific game mechanics: assume we have a ScreenManager MonoBehaviour present on a scene with a string property of current active screen, and we want to check if lobby screen is active.

Example of a test with this assertation:

In some cases you want to ignore error or exception logs. Unity method LogAssert.Except() wouldn’t work because test runner has its own way to handle logs. You have to use class PermittedErrors. You can set errors to ignore in Setup() method or wherever in you test method with methods:

You can clear ignored errors or exception by calling method PermittedErrors.Clear().

Show all projects by PlayQ