WARNING: This plugin requires Odin and DOTween to work!

According to the amazing talk of Ryan Hipple on Scriptable Objects.

Let’s say when the player jumps, you want a sound to play and the UI to display “Nice jump!”. The most common way is to have a singleton that deals with sound effects, and one with the UI. From the Player Controller script, you may then do :

This way of doing implies a deep link between the object that did an action and the ones that react to it. Based on the Single Responsibility Pattern, all the components should only do one single thing, and should have only one reason to fail.

In a perfect world, when the player jumps, he would shout to everyone “I JUMPED!” and everyone that feels concerned should react appropriately. This way, the player, the sound manager and the UI manager don’t have any link between them, and are connected through this event only.

Game Events are a way to keep the behaviours separated and disconnect all components that reference others, without having to use a Singleton. Each event is a scriptable object that notifies every concerned object when the action is done.

Creating a game event is dead simple. Simply right click in the project view > Event > Basic. Then, on each GameObject that want to register to this event, add a BasicGameEventListener component and drag the scriptable object in the “event” field. Finally, drag the action you wish to do when the event is raised.

Then in the inspector: 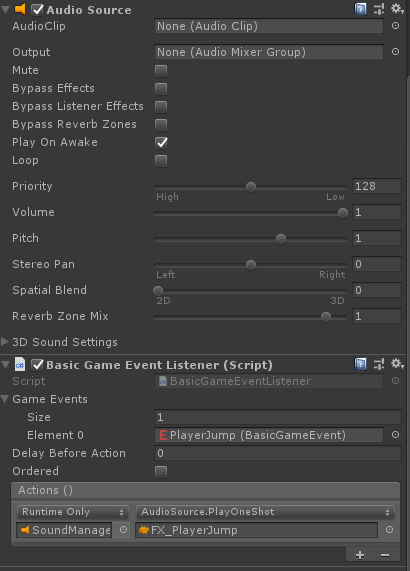 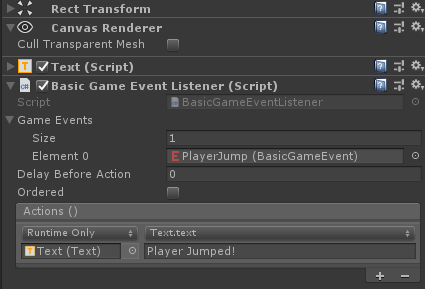 When the player jumps, the player controller script raises the event. Each concerned object then reacts accordingly through the inspector. The Sound Manager plays its sound, the concerned text updates its value, and all the behaviours are completely independant.

Working exactly as the basic game events, you have the possibility to create payloaded game events, i.e. sending an object of any type, along with the event.

Let’s say the player can change his nickname. When he validates his new name, you may want to raise an event with the new pseudo. Each listener might then react differently based on the pseudo chosen, display it and so on.

Each payload type must have its own Event and Listener classes. But no worries: a custom inspector has been made to make your life easy!

This will generate two scripts : GameEventString and GameEventStringListener. You can then create the game event “ChangedPseudo” and add the listener to the concerned objects.

Then, in the inspector, using the dynamic parameters, you can pass in the new pseudo to a class method that accepts a string as a parameter. 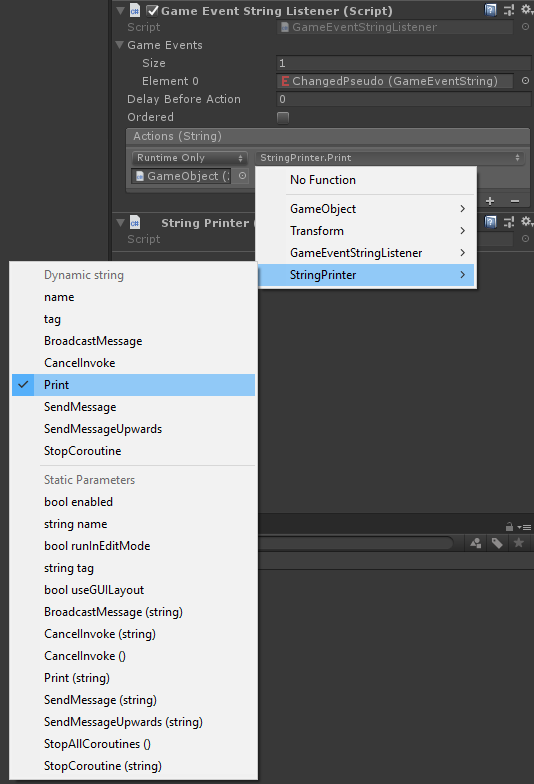 When the player changes his pseudo, it will print the new string.

Let’s say the player has an HP value stored in a variable that you want to display on the User Interface. This value often changes as the player often takes damages.

One way to do so is to have a Singleton that references the UI. Then in the player script, you might do something like :

This implies a deep connection between the player and the UI, along with the necessity of having a singleton (or at least static references).

In the previous example, simply create an IntVariable named “PlayerHP” in the project hierarchy. In the player script, reference this variable and modify it like so :

Then on the script that will update the text on screen, you just need to subscribe to the variable changes.

The data is completely agnostic of any logic, there is no deep link between controllers : only modifiers and listeners are used. Like so, each data that must be shared with other unlinked scripts can be stored in a registerable variable. Scriptable objects being assets, you can drag them in the inspector directly before any build, and ensure your data is initialized and ready to be used at runtime.

Each type of variable must be created. To create one, simply use the menu tool in Custom > Variable > Generate. You have the option to specify if the variable is a list. This option allows to have Add and Remove methods that trigger changes.

A basic inspector script to call serialized actions when a variable changes.

A compilation of amazing tools of all kinds.

Changes the speed parameter of an animator to a random value between the specified ranges.

Contains an action to trigger when an animation is over. To place on the same level as an Animator Controller to easily subscribe to animation ending events.

Use the attribute [Tag] to display all the availables tags in the inspector.

Use the attribute [Layer] to display all the availables layers in the inspector.

A set of useful camera shakes. Place this script on a camera component and simply the methods you need to shake it! The methods take a nullable callback when the animation is over.

Prints a string. Useful to quick test stuff in the inspector. Example : add an event listener and make it print a string to check if it is correctly called.

Draws a point in 3D space in the scene view. Example : 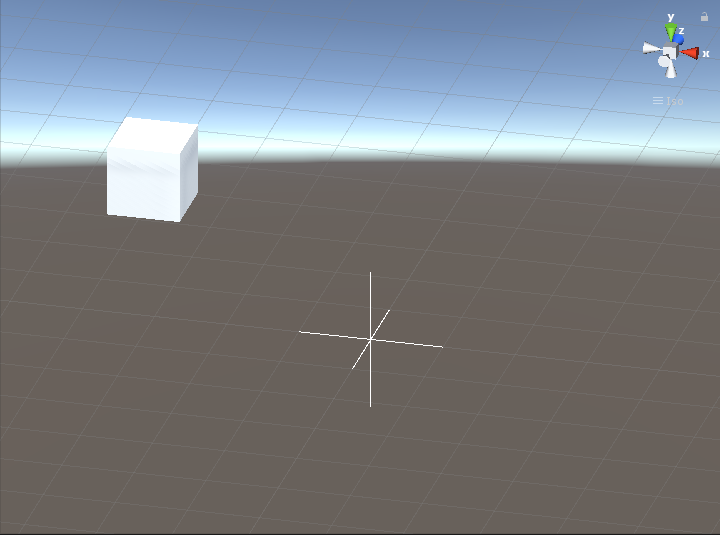 DelayedUnityEvent is an action serialized in the inspector with the option of adding a delay before it gets called. Instead of using the built-in UnityEvent class, it uses the amazing plugin BetterEvent, which allows to call methods with more than one parameter in the inspector, along with calling non-object related methods, such as Instantiate, Destroy, etc.

To use it, simply declare a field DelayedUnityEvent instead of a UnityEvent in your Monobehaviours.

Adds the key to the dictionary, or updates it if it’s already there. Call yourDictionary.AddOrUpdate(…).

It allows easy percentage distribution across different values, based on weights. Its generic implementation allows any type for the returned value.

To create a new Distribution type, you must declare two empty classes :

Don’t forget to use the namespace WeightedDistribution.

Example: Let’s say you want to create a distribution to get a random string.

You simply have to create a script called StringDistribution.cs, as follows :

You can now add your component to any gameobject.

Changing the weight automatically affects the probability of apparition. The percentage value is only used as a visual representation and, thus, cannot be changed directly.

You can now reference the distribution component by script and call Draw() to get a random value, as detailed in the API section.

Calling draw returns a random item from the list.

Removes an item from the list at the specified index.

Allows to encode and decode a file in base 64, without any class instance with static methods. Useful to encrypt data in an external file.

Allows to adjust a float value through the scene view’s gizmos. 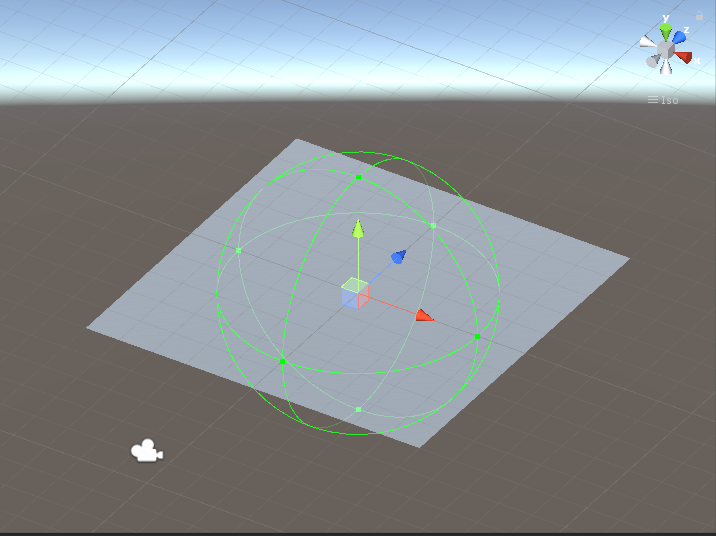 Put this script on any gameobject in your scene to make sure the targeted framerate will be the one specified in the inspector. By default, it is set to 120.

Instantiate a random prefab once as a child of the script, with position, rotation and scale offsets, along with a percentage of spawn.

The scale vector represents an offset relative to 1. For example, if you want the scale.X value to be between .8 and 1.2, simply put .2 for the x value.

Triggers an event when the user keeps on clicking and when he releases. It works with an interactable UI (UI Image for example).

Fills a registerable variable when the player touches the screen and moves the finger. It also works in the editor with the mouse and click.

It can be useful to subscribe to input changes, react to drags etc. It must be binded to a PointerInteractable component on a UI Image on your canvas. On the latter, bind the OnPointerDown and OnPointerUp to the InputController.Touch and InputController.StopTouch in the inspector.

If you want to register to input changes, here is an example:

Allows to detect input interactions with gameobjects in the scene.

Basic script to register when the player clicks on the screen. Add this component to a UI Image on your canvas.

Using this component, you can register callbacks to collision and trigger events directly in the inspector. The key used is the tag you want to compare to. If you want any tag, simply write the underscore character: _

You can precise what kind of interaction you want, whether it is OnEnter, OnStay or OnLeave. The callbacks can take a dynamic parameter, which is the Collision or a Collider (depending on the collision/trigger event type).

Checks if all the elements of the list have the same value.

Applies the material properties directly from the inspector.

You want to apply a random color between 3 specific colors to the second material of your mesh. Add this component, write 1 for the materialIndex. Then, in the color property, add the field’s name (for example “_Color”) and pick your range colors.

The same goes for int and float properties. If you want to have a completely random color without a range, you can toggle the “full random” checkbox.

Applies a random material from a list to the MeshRenderer.

A native callback is a unity event called on basic Monobehaviour’s methods, such as Start, OnEnable and so on. It can be very useful when prototyping, to have fast access to method calls and such, or to set behaviours on object disabling etc.

Invoke the actions in the unityEvent when the gameobject starts.

Invoke the actions in the unityEvent when the gameobject is enabled.

Invoke the actions in the unityEvent when the gameobject is disabled.

Custom and secure save/load file system. It creates a link between the data from an external file and their associated Registerable Variables.

Let’s say you want to save the number of coins earned by the player.

To create such a data, you must create a class that inherits from PlayerDataVariable<T>, where T is the type of the Registerable variable. You must also add the variable that will be written to the external file to the partial class PlayerData. Then, you only need to override the Init, Save and Load methods to handle the behavior on these events.

Once this is done, you only need to add this script to any gameobject and drag the associated registerable variable.

The data is a JSON formatted file, which is then encoded in base 64.

Example : The following code will allow the save/load of the player’s best score.

In the inspector, simply drag the scriptable objects that will contain the data :

Once all your datas are created, you must use an instance of a controller to detect when to Save and Load. For that, you simply need to add the PlayerDataController script to any gameobject. You can then add the game events that will raise the Save or Load. You can also specify to call the Save method when specific registerable variables change. 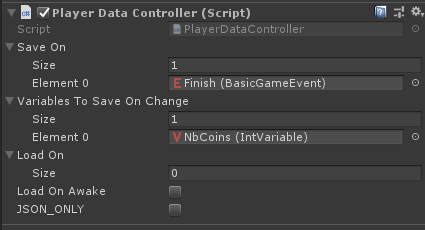 This will save the data to the external file when the event finish is raised or when the variable NbCoins changes.

Under the Custom/PlayerData tab, there are tools to have an easier data management.

Simply removes the file containing all the datas.

Allows you to generate a player data variable easily, without any code. 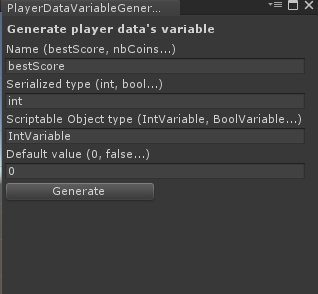 All the following fields are mandatory:

This class is then generated in Assets/Scripts/General/Utils/PlayerData/Variables/PlayerData. You can then move the safe anywhere safely.

Show all projects by Pimeko