Automatic .proto files compilation in Unity project to C# as you edit them, plus utilities.

Do you want to integrate protobuf as a data class, game saves, message to the server, etc. in your game? Now you can put those .proto files directly in the project, work on it, and have the editor script in here generate the classes for you.

As soon as you import/reimport/modify (but not moving) .proto file in your project, it will compile only that file to the same location as the file. If you want to temporary stop this there is a checkbox in the settings, then you can manually push the button in there if you like. Note that deleting .proto file will not remove its generated class.

The next problem is that your generated classes references external library Google.Protobuf that you need to also include in the game client so it is able to serialize to Protobuf binary. Not only that, protobuf-unity itself also has Runtime assembly which has additional Protobuf toolings. So both your assembly definition (.asmdef) that your generated classes resides and this package need Google.Protobuf C# library.

It is not bundled with this repository. You should download the Nuget package then use archive extract tools to get the .dll out. It contains targets such as .NET 4.6 and .NET Standard 1.0/2.0 which you should choose mathcing your Project Settings.

Over the years, this Google.Protobuf requires more and more .NET dependencies that ultimately not included in Unity.

For example, if it ask for System.Memory.dll because it want to use Span class but Unity is not supporting it yet, you may also downloading it and forcibly put in the project. Now that will also ask for missing references System.Runtime.CompilerServices.Unsafe here and System.Buffers here.

If you did find problem when forcibly including exotic .NET dll such as System.Memory.dll, you may want to downgrade the C# Google.Protobuf.dll and the protoc to match until it does not require the problematic dependencies anymore. I have listed several breakpoint version where the next one changes its requirement here.

How to use Google-made well known types

Maybe you are thinking about storing time, for your daily resets, etc. Storing as C# .ToString() of DateTime/DateTimeOffset is not a good idea. Storing it as an integer seconds / milliseconds from Unix epoch and converting to DateTimeOffset later is a better idea.

But instead of using generic int32/64 which is prone to error when you look at it later what this number supposed to represent, Google already has Timestamp ready for use waiting in the protobuf’s DLL you need to include in the Unity project (Google.Protobuf.WellKnownTypes.___), so you don’t even have to copy Google’s .proto of Timestamp into your game. (That will instead cause duplicate declaration compile error.)

Google’s Timestamp consist of 2 number fields, an int64 for seconds elapsed since Unix epoch and an int32 of nanoseconds in that second for extra accuracy. What’s even more timesaving is that Google provided utility methods to interface with C#. (Such as public static Timestamp FromDateTimeOffset(DateTimeOffset dateTimeOffset);)

Here’s how you do it in your .proto file. 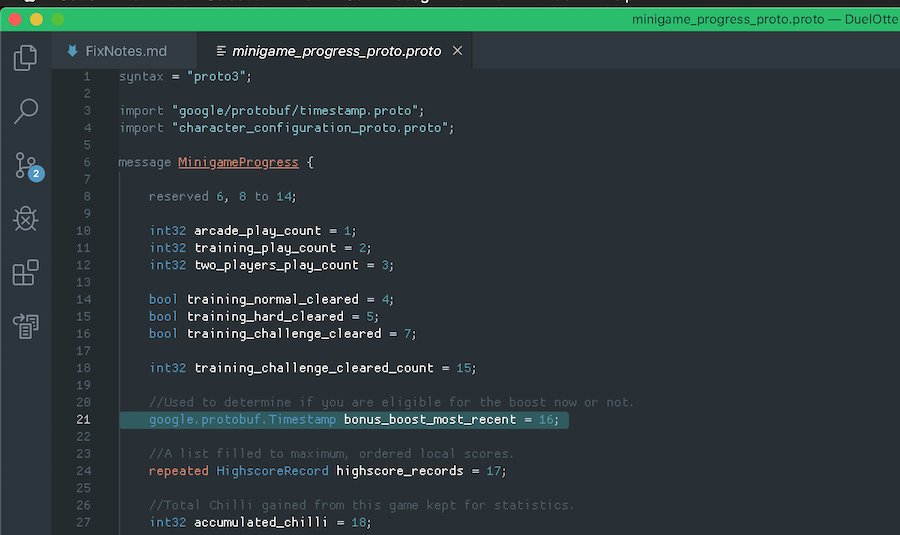 google/protobuf/ path is seemingly available for import from nowhere. Then you need to fully qualify it with google.protobuf.__ since Google used package google.protobuf;.

See other predefined well-known types. You will see other types already used for typical data types such as uint32 as well. Other useful one are google.Protobuf.Struct where it could store JSON-like key value pair where the key is string and value is varying type. Use google.Protobuf.Value for only the varying value type part of the Struct. I think generally when you think you are going to use google.Protobuf.Any, think of Struct first. (Unless it is really a byte stream.)

Use your own judgement if you want it or not!

Now that you can’t use mono backend anymore on iOS, there is a problem that IL2CPP is not supporting System.Reflection.Emit. Basically you should avoid anything that will trigger reflection as much as possible.

Luckily the most of core funtions does not use reflection. The most likely you will trigger reflection is protobufClassInstance.ToString() (Or attempting to Debug.Log any of the protobuf instance.) It will then use reflection to figure out what is the structure of all the data to print out pretty JSON-formatted string. To alleviate this you might override ToString so that it pull the data out to make a string directly from generated class file’s field. I am not sure of other functions that might trigger reflection.

You should see the discussion in this and this thread. The gist of it is Unity failed to preserve some information needed for the reflection and it cause the reflection to fail at runtime.

And lastly the latest protobuf (3.6.0) has something related to this issue. Please see https://github.com/google/protobuf/blob/master/CHANGES.txt So it is recommended to get the latest version!

Some more notes about Protocol Buffer

For complete understanding I suggest you visit Google’s document but here are some gotchas you might want to know before starting. 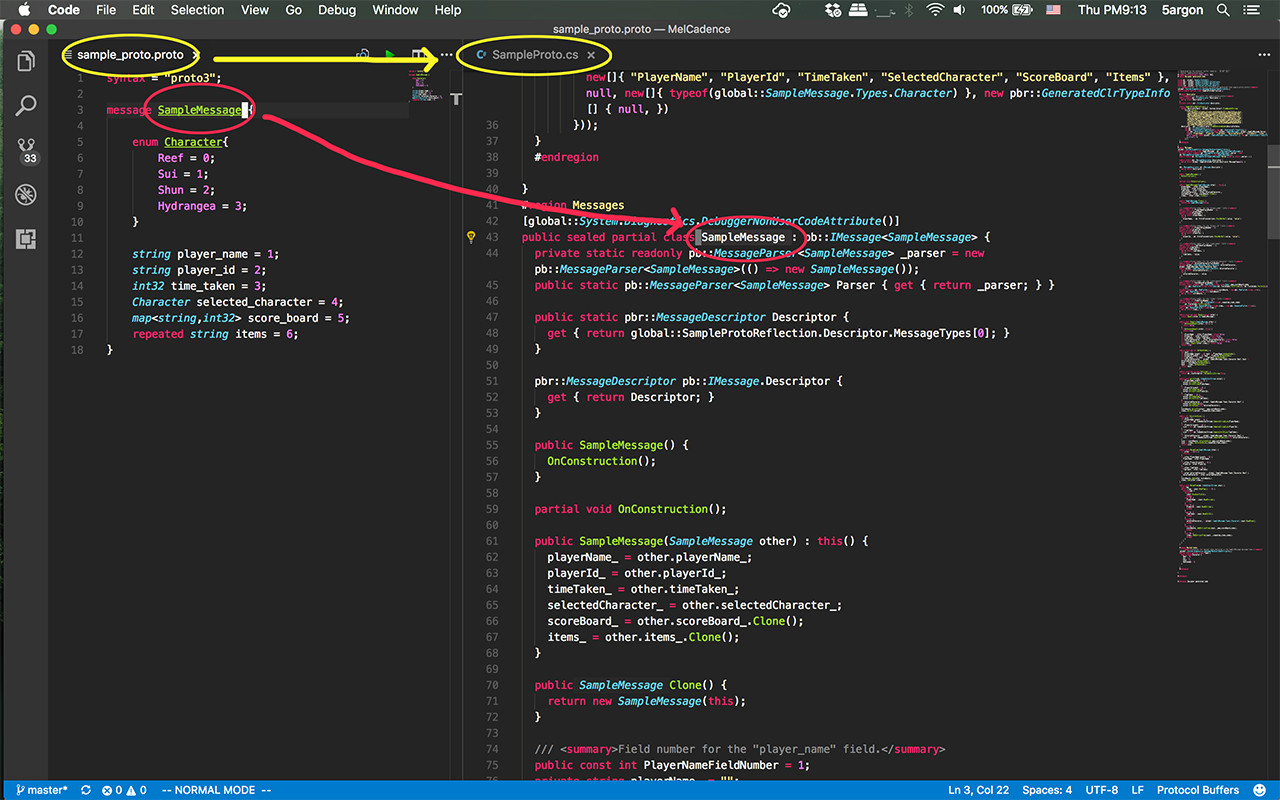 This is a Unity-specific utility to deal with physical file save-load of your generated protobuf class. This is perfect for game saves so you can load it from binary on the next start up. It has 2 versions, a completely static utility class and an abstract version which requires some generic typing.

The point of generic version is that, by providing your Protobuf-generated class T in the type parameter, you will get a manager just for that specific class T to easily save and load Protobuf data to disk and back to memory, plus an extra static “active slot” of that T for an even easier management of loaded data. (So you don’t load it over and over, and save when necessary.) The most common use of this active slot is as a local game saves, since nowadays mobile games are single-save and there is usually no explicit load screen where you choose your save file. There are methods you can use to implement other game save schemes. And because you subclass it, it open ways for your validation logic which would be impossible with just the static utility version.

It also contains some basic C# AES encryption, I think almost everyone wants it even though you are likely too lazy to separate key and salt from your game’s code. At least it is more difficult for the player to just open the serialized protobuf file with Note Pad and see exactly where his money variable is.

There are some problems with Protobuf-generated C# code that I am not quite content with :

The next problem is how to select some fields or message to be triggered by this post-processing. It will be by custom options feature. In the folder Runtime/CustomOptions, there is a protobuf_unity_custom_options.proto file that extends the options to Protobuf.

Right now this custom options gives you 1 message option private_message and 1 field option private. Unfortunately I think options can’t be just a flag, so they are boolean and you have to set them to true.

private would apply tighter accessor to only one field, private_message apply to all fields in the message. But yeah, I didn’t work on that yet. I just want to write these documentation as I code. 😛

protobuf-unity and ProtoBinaryManager together deals with your offline save data. What about taking that online? Maybe it is just for backing up the save file for players (without help from e.g. iCloud), or you want to be able to view, inspect, or award your player something from the server.

JSON at client side

The point of protobuf is often to sent everything over the wire with matching protobuf files waiting. But what if you are not in control of the receiving side? The key is often JSON serialization, since that is kinda the standard of interoperability. And what I just want to tell you is to know that there is a class called Google.Protobuf.JsonFormatter available for use from Google’s dll already.

How to use it is just instantiate that class instance (or JsonFormatter.Default for no config quick formatting) then .Format(yourProtobufMessageObject). It uses a bunch of reflections to make a key value pairs of C# variable name and its value which may not be the most efficient solution, but it did the trick.

If you want to see what the JSON string looks like, here is one example of .Format from my game which contains some nested Protobuf messages as well. That’s a lot of strings to represent C# field names. I heard it didn’t work well with any, not sure. But repeated works fine as JSON array [] as far as I see it.

If just for backup, you may not need JSON and just dump the binary or base 64 of it and upload the entire thing. But JSON often allows the backend to actually do something about it. You may think that there is one benefit of Protobuf that it could be read in a server, so shouldn’t we just upload the message instead of JSON? But that maybe only your own server which you code up yourself. For other commercial solutions maybe you need JSON.

For example Microsoft Azure Playfab supports attaching JSON object to your entity. Then with understandable save data available in Playfab, you are able to segment and do live dev ops based on the save, e.g. the player that progressed slower in the game. Or award points from the server on event completion, then the player sync back to Protobuf in the local device. (However attaching a generic file is also possible.)

Deciphering Protobuf at server side

As opposed to doing JSON at client side and send it to server, how about sending protobuf bytes to the server and deserialize with JS version of generated code instead?

Here’s an example how to setup Node’s Crypto so it decrypts what C# encrypted in my code. I used this pattern in my Firebase Functions where it spin up Node server with a lambda code fragment, receiving the save file for safekeeping and at the same time decipher it so server knows the save file’s content. Assuming you have already got a Node Buffer of your save data at the server as content :

Firestore could store JSON-like data, and the JS Firestore library can store JS object straight into it. However not everything are supported as JS object is a superset of what Firestore supports.

What you get from YourGeneratedProtoClassJs.deserializeBinary is not JS object. It is a class instance of Protobuf message. There is a method .ToObject() available to change it to JS object, but if you take a look at what you had as map<A,B>, the .ToObject() produces [A,B][] instead. This maybe how Protobuf really keep your map. Unfortunately as I said, nested array can’t go straight into Firestore.

After eliminating possible undefined or null, you need to manually post-process every map field (and nested ones), changing [A,B][] into a proper JS object by using A as key and B as value by looping over them and replace the field.

repeated seems to be ToObject()-ed just fine. It is just a straight array.

As this will need Protobuf you need to follow Google’s license here : https://github.com/google/protobuf/blob/master/LICENSE. For my own code the license is MIT.

Show all projects by 5argon