This is a tutorial and resources for getting started building AR apps with Unity’s AR Foundation plugin. You can follow along with this tutorial in your own project, and make use of the art assets included in the plants.unitypackage, or you can jump in at any stage of the project by opening the included Unity project and choosing the scenes labeled ‘Step1-Setup’, etc. The final stage of the tutorial is represented in the FlowerPower scene.

This tutorial presumes a moderate level of familiarity with Unity.

These sample scenes are a good place to start to see how to create a AR Foundations scene.

From the Manual, this covers setup and describes the basic features of the package.

The concept for this app is that you can place some seedlings in your environment and then when you ‘throw’ water at them, they will grow. For the demo, we will cover how to place objects onto a detected plane and also how to spawn a water prefab to interact with these virtual items. However, you could develop the gameplay more in a number of ways – by adding different varieties of plants with different requirements (how much water, i.e.), introducing different mechanics such as fertilizers or weeding, adding timers to the ‘watering can’ or the plants, etc. 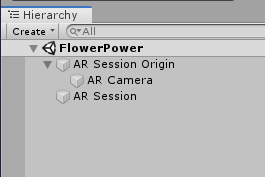 Build Your App to Your Device

You can now build your empty AR scene and you will see the camera output to the screen. Even if you want to skip the build step, it’s a good time to get your Build Settings straightened out.

You’ll also want to change your Company Name and Product Name at the top of the Player Settings window.

Now, you can try building your app if you’d like. Even though it looks like you’re seeing just the device camera rendering directly to your phone’s screen, ARFoundation is doing a lot behind the scenes. We’ll see how to visualize this in the next section.

Now we might want to be able to visualize the plane and point detection capabilities of AR Foundation. To do this, we will add some components to the ARSessionOrigin game object. 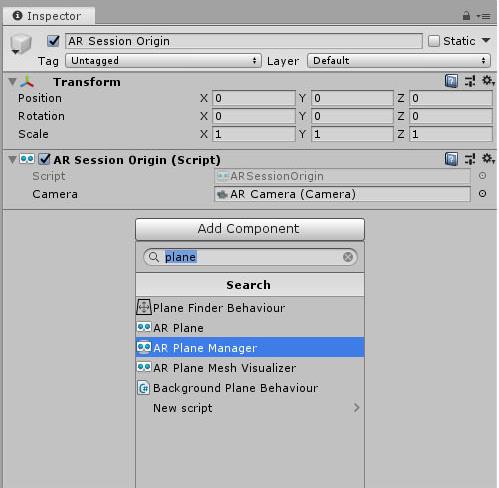 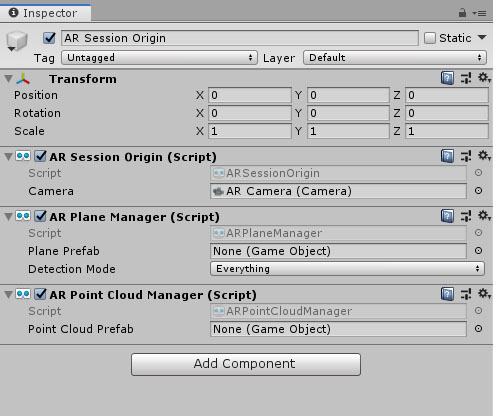 Now we have the Managers in place on the Session Origin, but we still won’t see anything until we assign something to the Plane Prefab field of the ARPlaneManager script and the Point Cloud Prefab of the ARPointCloudManager. You can create your own custom objects for these prefabs, but we’ll use the default assets provided as part of AR Foundation.

To create the prefabs, we first need to add the provided assets to our Hierarchy. 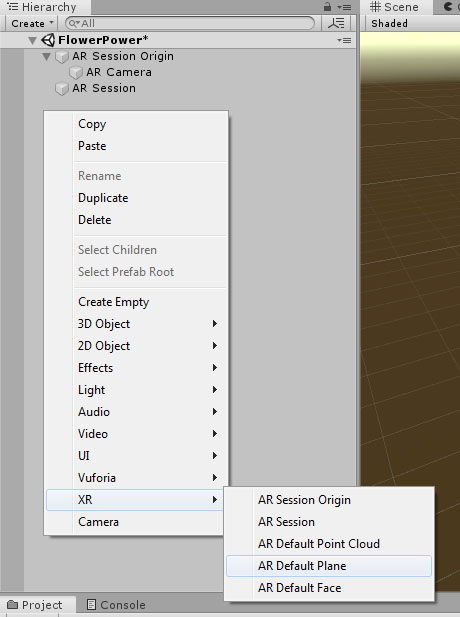 Now, we need to make these two new objects into prefabs. 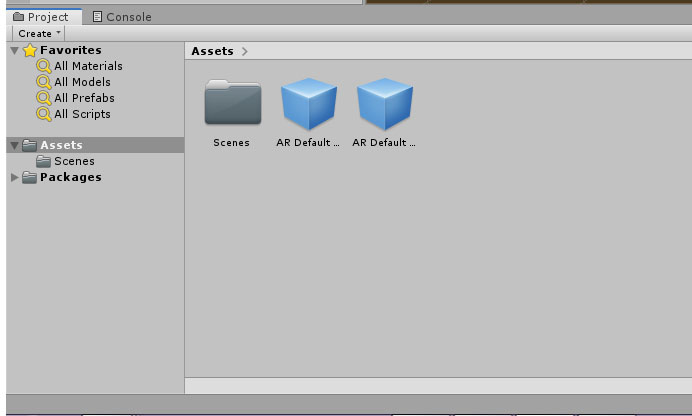 Drag the plane and point game objects to the project window to make them into prefabs. 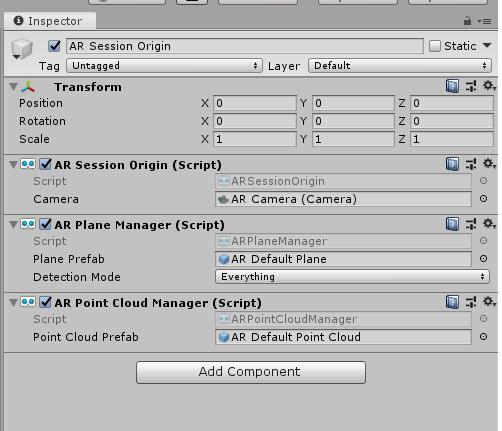 The ARSessionOrigin with the plane prefab and the point cloud prefab correctly assigned for plane and point detection/visualization.

Now if you build your project to your device, you should see a mesh of triangles depicting detected planes, as well as a bunch of points representing the point cloud.

Placing objects in our AR environment

Now that we can detect planes, let’s place a virtual object on the plane. I’ve included some starter assets in keeping with the gardening theme of the app, if you’d like to use them.

There are two ways to capture ray hits on a detected plane or point surface:

We’re going to use the first, simpler version which is fine for casting rays from touch events on the screen. 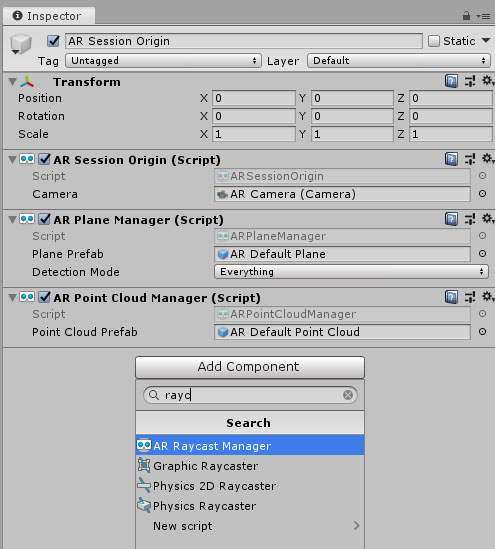 We need the raycast manager to be present on the Session Origin object to detect hits on the plane.

Now, if we build and run the app, you should be able to place flowers on detected planes.

UI and Interaction with Virtual Objects

In this section, we’ll create a simple UI with a button that will spawn a raindrop prefab we’ll use to ‘water’ our virtual plant. If you’ve started with a seedling prefab, this is a chance to have it ‘grow’ into the other prefabs with appropriate watering. 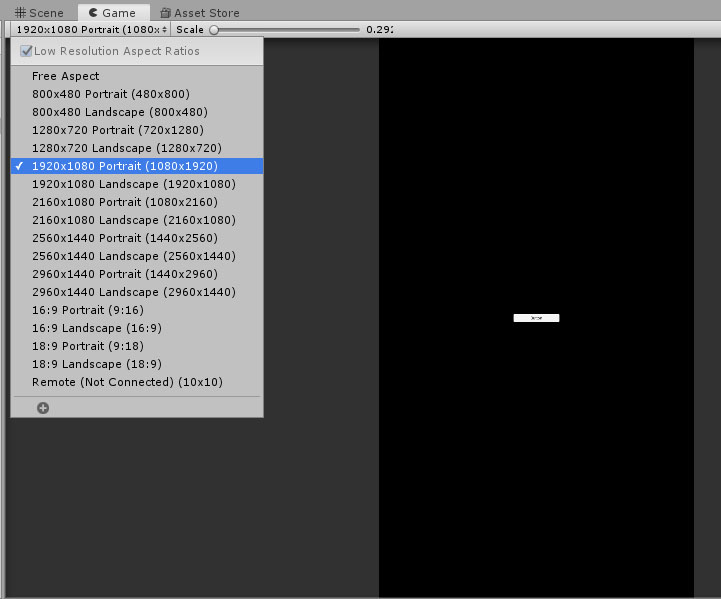 Adjust the aspect ratio used by the Game window so that you can better position your button.

My Hierarchy and Game window with the button created and ‘styled’ slightly.

Select your new ShootRaindrop() function as the target function to execute on the button’s click event.

If you built your project now, you’d discover that your raindrops were spawning correctly, but that you would also spawn another flower with each tap on the Water button. This is because the raycast used by the ARRaycastManager is still firing, despite the fact that we’ve had a UI hit. So, let’s add some code to check whether we’re over a UI element (or any other game object) and not spawn a flower if so.

Now modify the inner if statement in the Update() method to read: if (arRaycastManager.Raycast(touch.position, hits, TrackableType.PlaneWithinPolygon) && !isTouchOverUI(touch.position))

Now we should spawn only the Raindrop prefab and not the Flower when we press the button.

There are a number of things you can do to make this app more fun or better from a UX perspective. Here are a few ideas:

Show all projects by AbigailMathews