I’ve been working on this system on and off for a little while. I decided it should finally see the light of day 🌄.

🚧 Replicator is still under construction. There is no stable version yet 🚧

The Project’s Roadmap is relativley well covered by its GitHub Milestones, which group together issues to give an overview of upcoming changes.

Replicator makes it simple to rework existing code to use object pooling. Set up a pool, swap Instantiate calls to Spawn and Destroy calls to Recycle, then grab a cup of coffee or something ☕.

First, create an Object Pool in your project. 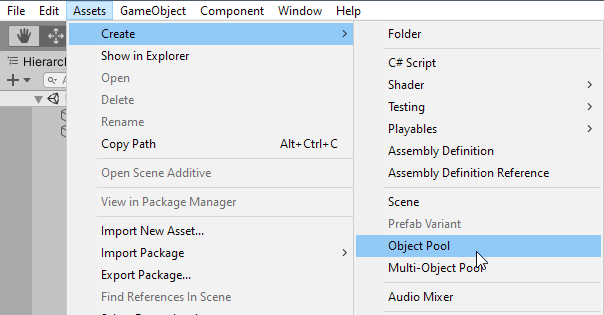 Configure the pool (refer to the Manual for guidance on pool configuration).

Your object pool is set up and ready to use! Making sure your script has a using Replicator; directive, the basics are:

Multi-object pools work similarly but will randomly pick an available object to spawn from among those specified.

With a flexible API, there are several ways to Spawn() / Recycle() GameObjects in whichever way makes sense for your project. As long as a prefab is assigned to a pool, you can use the GameObject reference for Spawn()-ing & Recycle()-ing too:

On top of that, extensions to MonoBehaviour allow your scripts to directly call Spawn() or Recycle() in the same way as Instantiate() and Destroy():

Full details can be found at the API Wiki.

Some Unity components, such as Rigidbody, require some special handling to ensure that behaviour following recycling / re-spawning is as expected. As an example, a Rigidbody does not reset its velocity or angularVelocity properties when deactivated. Replicator includes scripts, found in the Component menu under Pooling, for cleaning up the following commonly-used Components:

Head over to Releases to download a unitypackage the most recent version appropriate for your Unity version. Import the package into your Unity project.

If you’d rather work on Replicator itself, it’s much easier to just clone the repository, which is a complete Unity project.

Found a bug 🐛? Have some feedback 💭? Want to add a feature to the wishlist ✨?

Here are some ways you can help make Replicator better:

Replicator is released under the MIT license. Refer to LICENSE.md in this repository for more information.

Show all projects by ettmetal