An interactive and immersive physics laboratory for Web, PC and VR.

A interactive physics laboratory and experiment environment implemented in Unity3D, designed for active learning in the classroom or at home. It visualizes and simulates various physics experiments 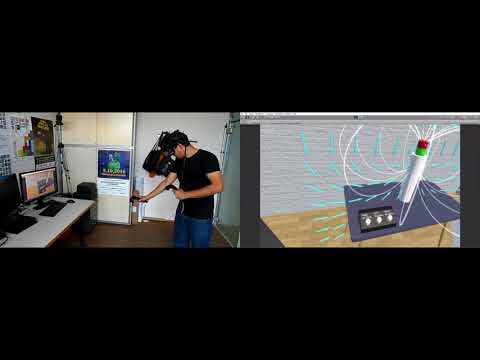 Design and Implementation of Maroon

A Van de Graff generator is an electrostatic generator and converts mechanical energy into electrical energy. It is one of the most frequently used device for physics teaching experiments. A rotating insulating belt will be electrically charged by friction. The electrical charge is transported by the movement of the belt into the large metallic hollow ball.

In the Falling Coil experiment, a small magnet is positioned some distance above the table and a conducting non-magnetic ring is then dropped down onto it. If the coils enters the magnetic field of the magnet, a current is induced. Once there is a current running through the ring, it has its own magnetic field which then interacts with the magnetic field of the magnet and applies an upward force to the coil that pushes it back up. The ring has a specified mass, a resistance and self-inductance and the magnet has a magnet dipole moment. Users can change these parameters using control panels to see how the magnetic flux and the induced current are changing correspondingly. Furthermore, users can activate different visualizations like field lines, a vector field and the iron filling visualization. This allows the user to recognize invisible phenomena and thus, get a better understanding of the underlying magnet field.

The Faraday’s Law experiment is very similar to the Falling Coil experiment. It shows the interaction between a coil and a magnet, both constrained on the horizontal axis. When users move the magnet themselves, the changing flux through the coil leads to a current into the coil which is displayed to the user as a graph. The special feature in this experiment is that the user can also feel the acting force through haptic feedback which corresponds to the force. This gives the user an ”extra-dimension” for an even better experience.

A capacitor is an electrical component which consists of two electrically conductive surfaces which are separated from each other by an insulating material, the dielectric. It stores electric charge and the associated energy in an electric field. The stored charge per voltage is called electrical capacitance which depends on the plate distance, the overlapping area and the dielectric. Users can change these parameters to see how each parameter affects the capacitance. The resulting capacitance value is shown to the user on the display. By clicking the play button, the capacitor is being charged up to the given voltage. The charging process is illustrated as graph on the display and through charges that move from one plate to the other plate. The color of the plates indicate how positive or negative they are charged. Users can also observe the behavior of charges in the electric field by placing them into the field. The underlying electric field can be visualized by using field lines and a 3D vector field visualization.

The Huygens Principle experiment is one of the first experiment in Maroon that does not deal with electromagnetism. It shows the physical model of diffraction, which states that every point of a wavefront can be seen as a starting point of a new wave, called elementary wave. The new wavefront results from the overlaying elementary waves. To show diffraction, a slit plate is placed into the basin. Behind this plate, the user can observe the interference pattern generated by diffraction of the wave propagation at the slits. Users can change the wave amplitude, the wave length, the wave frequency and the propagation mode to see how these parameters affect the interference pattern behind the plate. The user can also replace the used plate with other plates which have more or fewer slits. This leads to different interference patterns. For a better wave illustration, the wave color can be freely changed.

Show all projects by GamesResearchTUG