Open-source visual programming tool for artists, designers and other non-programmers alike who want to make games but don't know how to program.

CodeGraph is an open-source visual programming tool for artists, designers and other non-programmers alike who want to make games but don't know how to program. It's based on Unity's new UIElements library and GraphView, the same library Shader Graph is built on.

DISCLAIMER: Creating CodeGraph was a learning process for me as I have never experimented with expanding the Unity Editor through custom windows, nor have I ever used the UIElements library. There’s a high chance you will encounter bugs while using CodeGraph. I’ve tried to fix all the bugs I found while developing the project but feel free to open an issue if you encounter bugs.

CodeGraph was built using Unity 2019.3.x, but any other version that supports UIElements should work perfectly with CodeGraph. CodeGraph doesn’t have any dependencies besides Newtonsoft.JSON which comes inside the .unitypackage file.

After importing the CodeGraph Unity Package, you can start using CodeGraph by right clicking in your assets folder (from Unity) and creating a New CodeGraph MonoBehaviour. Double clicking this file will open the CodeGraph Editor where you can start adding nodes and connections. After creating your graph you can convert it into C# code (the default programming language used in Unity) by clicking the “Compile graph” button at the top of the window. Next to that button is the “Save graph” button which saves the current state.
DISCLAIMER: CodeGraph doesn’t save automatically and it doesn’t alert you of unsaved changes when you try to close the window, open a different file, etc. so make sure you save your file regularly by either clicking the save button or hitting CTRL-S on your keyboard
Clicking the Compile button will produce a C# file in the same directory with the same name. You should use this file or attach it to gameobjects, as there is no way yet to use CodeGraph files directly in your game.
For more information about how to use CodeGraph and what nodes are available check the Examples folder provided.

How to get started with CodeGraph

CodeGraph works mainly with Unity events such as Start, Awake and Update. Everytime you add one of these nodes to your graph they will be added to the compiled C# file. You also have the option to add your own functions and call them later. Any event node (and the Create Method node) have a button attached to them called “Add new port” this will add a new port to the output of the node which can be used to connect to other nodes. When generating the code each of the ports will be added to the code in the order they appear on the Event node.
For example, take the following CodeGraph: 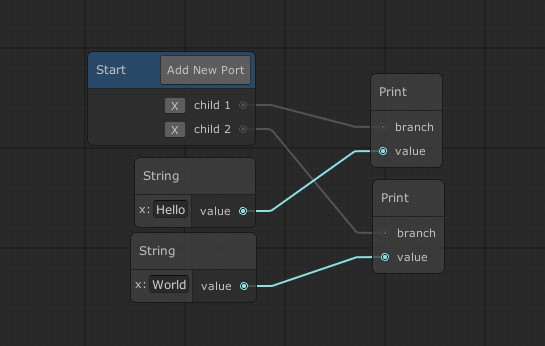 It contains a Start Event node, two Print nodes, and two String Input nodes. The print nodes just output to the console whatever is provided in the value input; in this case, two strings. Like I said before, event nodes generate code in the order their children are connected. In this case the output named child 1 is connected to the first print node, the one that prints Hello and the output named child 2 is connected to the other print node. The expected generated code should be as follows (excluding the comments I added for clarity):

When you want to connect nodes to event nodes you should use the branch input. Nodes that don’t have a branch input cannot be directly added to event nodes, and instead they are used as intermediary nodes. For example, have a look at the Vector3 Node:

Features that are currently missing or not working as intended

If you would like to contribute to this project feel free to submit a pull request, and take a look at the Contributing document provided to get a better insight into what contributing means, and the Code of Conduct.

We use CalVer for versioning with the format YYYY.0M.MICRO. For the versions available check the tags on this repository.

This project is licensed under the MIT License. See LICENSE.md for more details.

Development has slowed down significantly as I try to focus more on my studies. I will still try to update this from time to time by adding new nodes or small features. Some of the big features planned will make their way into the project when I have more time. If you want to contribute feel free to fork this repository and open a pull request. The code is mostly undocumented so it might be quite the task to add new features. Adding new nodes should not be that hard.

Show all projects by TeodorVecerdi