The project is still in a very early phase, developped and tested only on Windows for the moment

My goal is to provide a framework plugged to Unity environments using ml-agents, that will be used to train neural networks through an evolutionary algorithm

For the moment, only single-agent games can be handled but I plan to make it usable with multi-agents and adversarial games

I use the 3DBall environment (provided with ml-agents) to show examples in this README, if you want to make your own environment, please refer to this

Python 3.6 was used for this project

Install numpy: (I use a specific version of numpy since there is a known problem to pickle certain objects in later versions)

You will find some ready to run examples in train.py and run_trained_agent.py files.

If you want to train your own neural nets, use:

If you want to display a game of my best neural net, use:

Having multiple agents helps since they’re all playing at the same time, the Game class handles the distribution of multiple neural networks to agents in an environment

By training in an environment with 12 agents, training was sped up by a factor of 3 compared to a single-agent environment

The most time-consuming part of the genetic algorithm is the evaluation phase, in which all neural networks play multiple games to report their performances

All created process have their own UnityEnvironment, which is a source of technical difficulties

Since all created child process start their own environment at evaluation time, the evaluation process is actually slower in the first generations of the genetic algorithm, but as the training advances and agents get good, their game last longer and the multi-process evaluation takes advantage 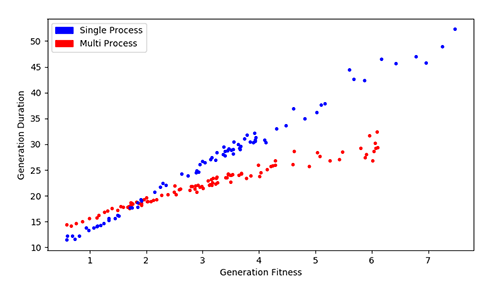 The break even point between single and multi process is clear in the previous plot, it might be specific to the 3DBall example but we observe a clear linear relation between the average fitness of the population and the duration of a generation

Distributed under the MIT license. See LICENSE for more information.

Show all projects by valentinmace