Davinet development is currently on hold as we explore networking options.

Davinet is a (work in progress) proof of concept for a Unity multiplayer networking framework (it is not remotely production ready). Its primary goal is to allow players to interact with physics objects with the same level of responsiveness and precision as they’d have playing offline. It is designed with the upcoming asymmetrical VR vs PC game Davigo in mind. This proof of concept is created to both survey if there is interest in a community driven networking package of this type and as a request for feedback on the general architecture. 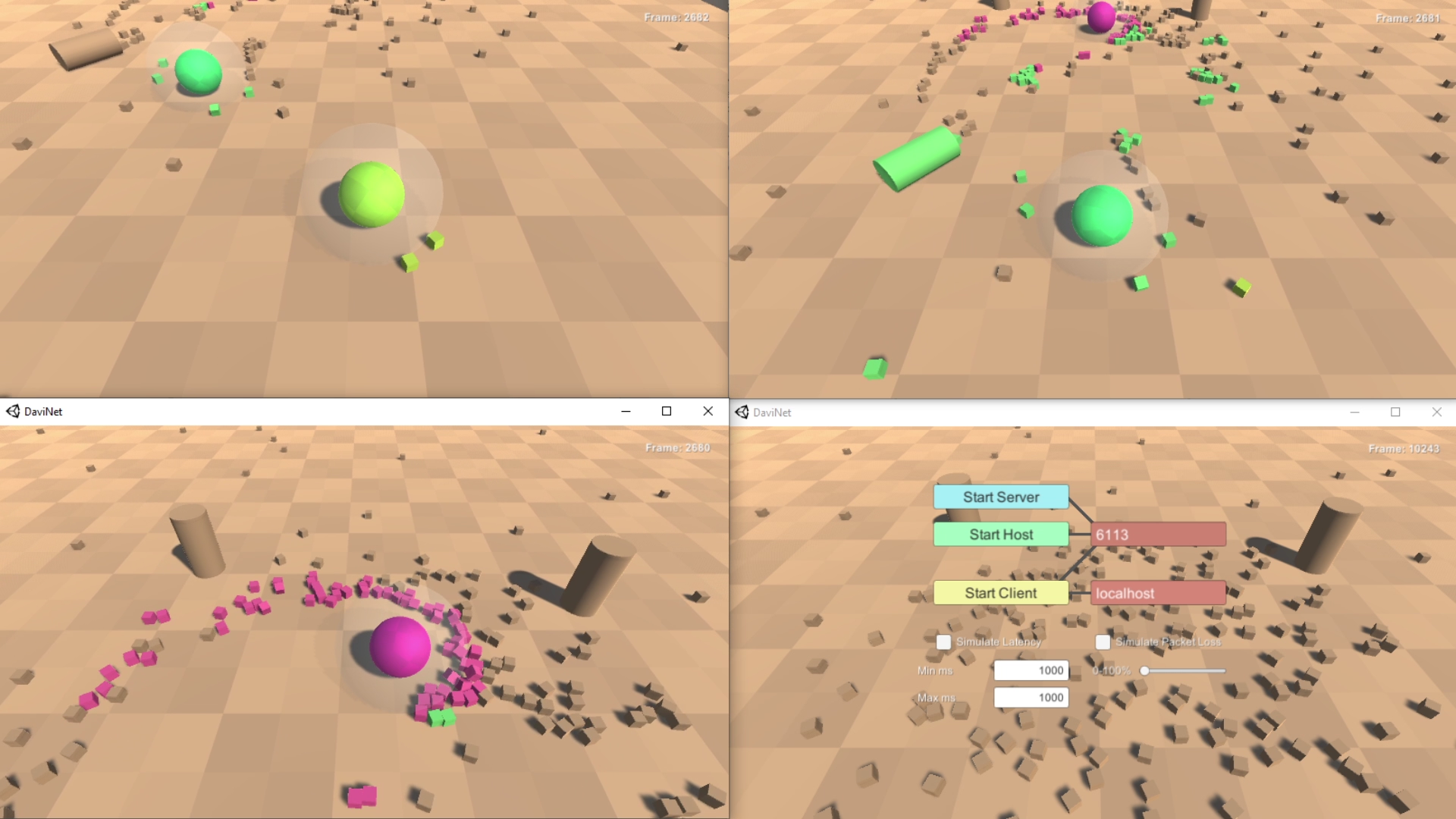 It has architecture goals to be a minimalist package with loose coupling, extensibility and encapsulation of netcode. A thread detailing the reasoning behind the package can be found on the Unity forums. It is based on the excellent State Synchronization and Networked Physics articles by Glenn Fiedler (Gaffer On Games).

Working towards proof of concept. See below for feature goals in detail. Works well in LAN. Distributed authority system needs to be completed to avoid conflicts that arise from environments with latency. This is noticeable when using the latency simulator.

This repository contains a sample project that can be found in Sample/PhysicsSample. To run this scene, you can make a build and launch multiple instances of the executable. Alternatively, Davinet can create a Junction Unity Project to allow you to open the project in a second Unity Editor instance for easier testing. Unity does not normally allow opening a project in multiple Editor instances. To workaround this, Davinet will create a dummy project and create junctions to Assets, ProjectSettings and Packages. This tool can be found in Unity in the Davinet menu (Windows only).

When running the project

To get started understanding the sample project, begin with the Menu.cs script.

Davinet uses a state synchronization client-server model with a distributed authority scheme. All data flows through the server, but authority over objects is distributed among the peers. This allows for maximum responsiveness on the clients, with the tradeoff that Davinet does not have an authoritative server. Davinet allows for the server and client to run in the same game instance (clients of this type are called listenClients).

Davinet sends all data about each objects state over the network. For a rigidbody, this would be its position, rotation, velocity and angular velocity. This allows peers to continously extrapolate the state of the simulation, with errors being corrected by the server.

To avoid having to code directly against the networking layer, gameplay logic talks to an abstraction layer called the Stateful World. Every game object that is part of the gameplay logic must do the following.

Contributions are most welcome, and can either take the form of pull requests or direct feedback (the Unity thread is the best place for discussion!). To find areas that need improvement, you can search for comments marked // TODO:. If you’re interested in frequently contributing, feel free to get in touch with the repo owner (me, Roystan/Iron-Warrior).

The following needs to be completed for a fully functional prototype.

Show all projects by IronWarrior