Stupid Uw U by Succyboi - 3

Stupid.UwU is a super easy to use library for Unity that enables you to make your scripts look as beautiful as ever WITHOUT having to write a custom editor.

UwU is a super easy to use library for Unity that enables you to make your scripts look as beautiful as ever WITHOUT having to write a custom editor.

Why not use custom editors?

Custom editors are incredibly versatile but they usually require you to create an additional script or class, create serialized properties for all the fields you want to show, link it to your original script, etc. It can be a lot of hassle.

UwU is here to cut out the middle man. It attempts to make every script feel beautiful, without compromise and in half the time it would usually take.

How does UwU work?

UwU uses something called Attributes. Perhaps you’ve used one before in the form of putting [Header("")] above a variable to give it a title. UwU attempts to make all its featured GUI elements as easy to use as this. 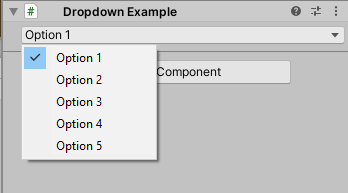 How do I use UwU?

Simply download the unity package from the releases tab or copy the sourcecode directly from this repository and drag it into the Unity assets folder of your project. You can then write using Stupid.UwU; on the top of your script and start using attributes to make your scripts look beautiful. Try out some of the examples above and see the magic happen!

No. UwU does not affect in-editor performance. However because we’re using attributes and attributes need to be compiled along with the script, the compile time may be slightly longer however this effect will only become noticable when you use +30 or so attributes.

No. Although UwU is super easy to use it, because of the limitations of attributes, lacks in complexity. Once there is a demand for more complex custom inspectors UwU starts to become a less preferable alternative to writing your own custom inspector.

Yes! This is actually another benefit of using UwU over your own custom inspectors. You won’t have to put scripts that use UwU in an Editor folder or use #if UNITY_EDITOR on anything that uses UwU.

Features yet to be added

Although UwU already features a lot of GUI methods it is still missing a few features:

There’s also some bugs that are known but have not been fixed yet:

Though the largest part of this code was written by me the inspiration for this project was (if you hadn’t guessed) EasyButtons by Mads Bang Hoffensetz (@madsbangh).

The dad joke generator relies on this api.

Last but not least…

UwU already supports quite a few GUI methods but if there’s a feature you would like to see in the next version feel free to open an issue.

If you encounter any significant bugs please also open an Issue.

If you know how to fix one of the known bugs please create a pull request or contact me.

Show all projects by Succyboi