This is a simple Unity3d project for using M2MQTT with Unity. The M2MQTT library was modified to run also on UWP/HoloLens.

An example scene is provided with a UI for controlling the connection to the broker and for testing messaging. 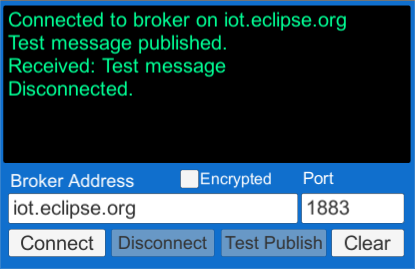 To try this project with Unity press the button Clone or download and choose Download ZIP. Save and unzip the archive to your hard disk and then you can open it with Unity. An example scene is provided in M2MqttUnity/Examples/Scenes/M2MqttUnity_Test, with a UI for controlling the connection to a MQTT broker and to test publishing and receiving messages. You can find in the same folder also a scene slightly changed to test the project in VR/AR/MR (M2MqttUnity_TestXR).

Building on different platform and devices

These setting were used for all the platforms:

SSL connection problems found with some combination of Unity versions/platforms.

Contributions from you are welcome!

If you find bugs or you have any new idea for improvements and new features you can raise an issue on GitHub (please follow the suggested template, filling the proper sections). To open issues or make pull requests please follow the instructions in CONTRIBUTING.md.

Released under the MIT License.

Show all projects by gpvigano