The complete open-source code and assets are available in this repository. If you just want to run the compiled application, visit the download page here for iOS, Android, Linux, MacOS and Windows.

Blockchain3D is an open-source multi-platform application to visualise graphs in glorious 3D and virtual reality (VR). The application is built using Unity and C#. The word graph here is used in its mathematical or computing science sense as being a collection of nodes connected by edges. This project is about graph drawing rather than charting:

Blockchain3D is a generic graph drawing tool. Social media provides a good source of graph data: Twitter, Facebook and LinkedIn all contain graph relationships that could be visualised in Blockchain3D.

However, as the name suggests, the current focus of Blockchain3D is to visualise blockchains. Many aspects of blockchains can be represented by graphs. For example, consider Bitcoin. A Bitcoin transaction is a flow of unspent Bitcoin from a set of input addresses to a set of output addresses. This can be drawn as a graph in 3D space: 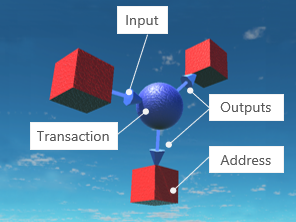 The project makes calls to blockchain.info to get the necessary bitcoin data to display. If you intend making very many calls to the blockchain.info site, you will need to apply to them for a free API key to bypass their request limiter. To run the demos and play around, you will not need an API key. In addition, a small amount of bitcoin test data is built in and so the project can also be run completely offline.

Download or clone this repository. All of Blockchain3D is contained in the B3d folder. To help orientate yourself in the project, note these folders under the top level \Assets\B3d\ folder:

The C# scripts have namespaces matching the above folder structure.

Take a look at the scenes in the folder \Assets\B3d\Demos\Btc\Ocean\Scenes. Open the scene called world. Play the scene in the editor. You will see some graph objects appear something like this: 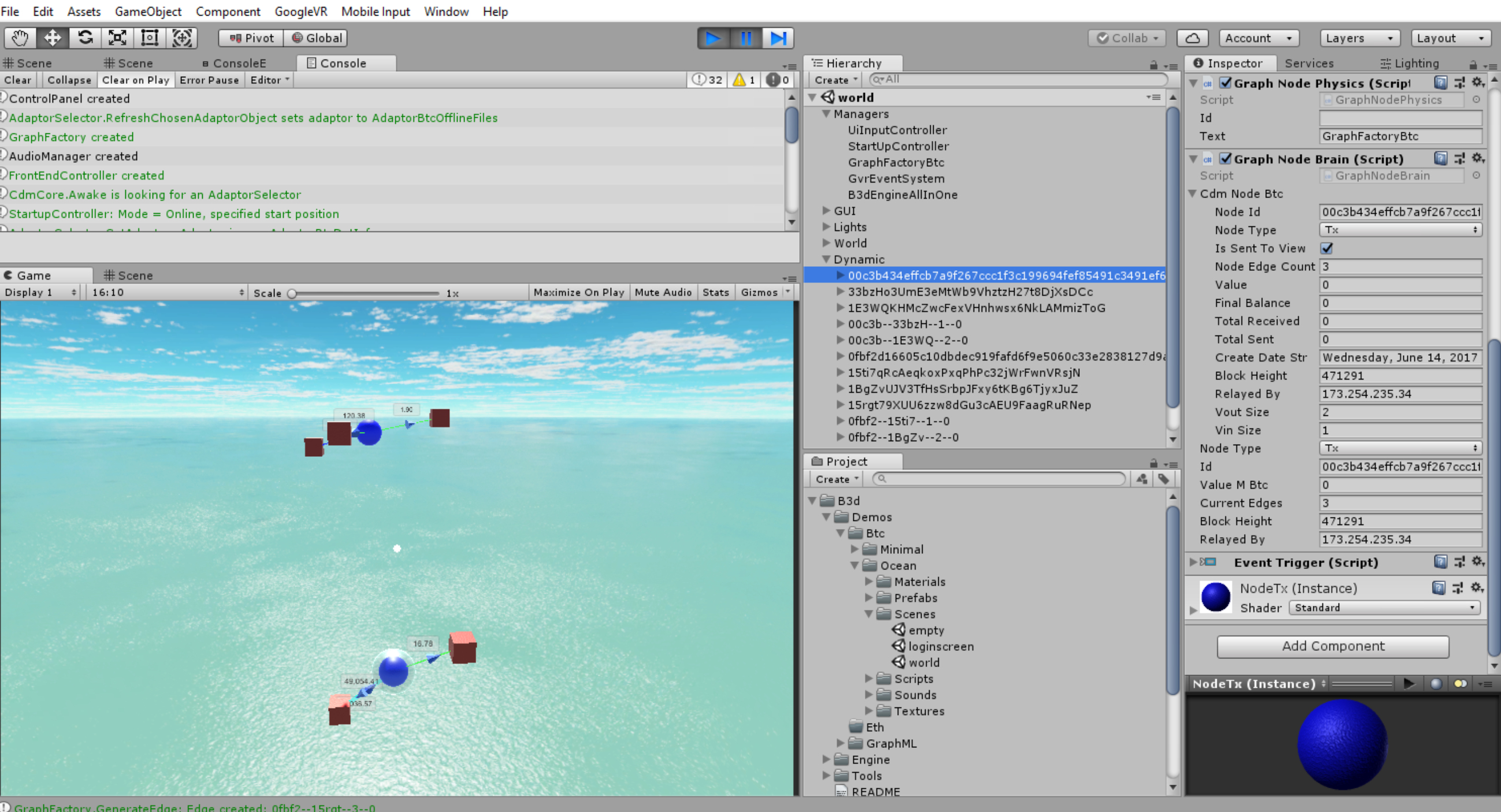 What You Can See

Blue spheres are bitcoin transactions. Red cubes are bitcoin addresses. The cubes and spheres are nodes in graph terminology. You can see lines with arrows joining the nodes. These lines are called edges in graph terminology. The arrow direction shows the flow of bitcoin. The billboarded text labels near the edges show the flow of bitcoin measured in milli-bitcoin.

When run directly, the world scene defaults to being online showing some specific bitcoin transaction data sourced from blockchain.info. The world scene can also be run via the loginscreen scene.

To do this, open the loginscreen scene in the same folder and run it. From here you can specify a start address or transaction, and you can choose to run offline using demo data only. When run with demo data, the application does not need internet access and it won’t try to get data that is outside the test data set.

If the build target is Windows/Mac/Linux then it is possible to look and fly around in the game window in the editor using mouse and WASD keys (and QE for up down). If the build target is Android then the controls are different because the Unity editor tries to emulate VR mode (press shift or alt and use mouse to do VR-like head movements).

On all platforms, the little white dot in the centre of the screen is your crosshair: 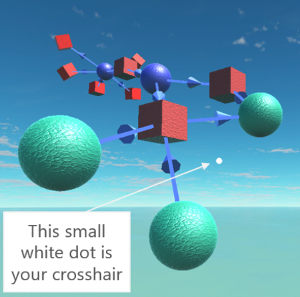 The crosshair shows what you are looking at. A node turns white when it is gazed at, and the crosshair will expand into a circle if you can interact with that item.

Move the crosshair (the little white dot) until it is over the address or transaction you want to know more about. The item will turn white, and the crosshair dot will expand into a circle if the item can be interacted with. Then click or tap to see more edges associated with that node.

Some addresses have many thousands of transactions and some transactions involve many hundreds of addresses. Instead of trying to display all of these edges at once, the application starts by showing only the first few edges. Then you can display more edges by gazing at the address or transaction and tapping the screen or clicking the mouse

You can see a complete list of usage controls here.

See the developer wiki for complete documentation on:

Show all projects by KevinSmall