With modulation ranges, AudioSource pooling, playing at world coordinates, and even playing while following a Transform

My take on a light-weight sound manager for Unity3D. Admittedly I haven’t looked into any implementations on the Asset Store, etc., because I didn’t want to spoil the fun of writing mine from scratch. So this is just a small, relatively simple component with solid core features that should perform reliably and efficiently.

I’ve been using it in my project for quite some time, and I’m a satisfied customer, so to speak, so I decided to share it.

Pro tip: It’s totally not spaghetti code. 😉 I tried to generally separate the responsibilities, but without creating a confusing amount of classes/files, so I pretty much nested everything into a single class. I think it’s a relatively maintainable/extensible design, so you shouldn’t have a very hard time adding new features if you wanted. (I also have some ideas for additional features, but those would require some more book-keeping, plus classes where nesting them is not really justifiable.)

Note that the comments in the code are a bit excessive if you’re an experienced developer. I just tried to help others too to understand it better.

Update1: I added the capability of Transform tracking playback in the form of two new public methods. This means that the SoundManager can now be used for moving objects too. For this addition I refactored the class internally. Short testing shows this new feature to be working well, but please inform me of any bugs.

Update2: I encapsulated all debug log messages into a separate class, and added a logging setting to the Inspector. So you can turn off logging for deployed builds in a way that completely avoids string operations and allocations (since all debug messages are constructed inside this helper class). Available logging settings: None, LogOnlyInEditor and LogAlways.

Update3: I swear I’ll stop adding these update sections here. 😃 Anyhow, I refactored the SoundManager class again. Plus I changed the public method signatures. The most visible change is that the methods now return the sound type in the callback, so you can route multiple playback finished notifications into a single method, and check there which one was finished. In terms of refactoring, internally the class changed a lot; basically I encapsulated all AudioSource handling responsibilities into a separate nested class, and cut out all code duplication in the method overloads. 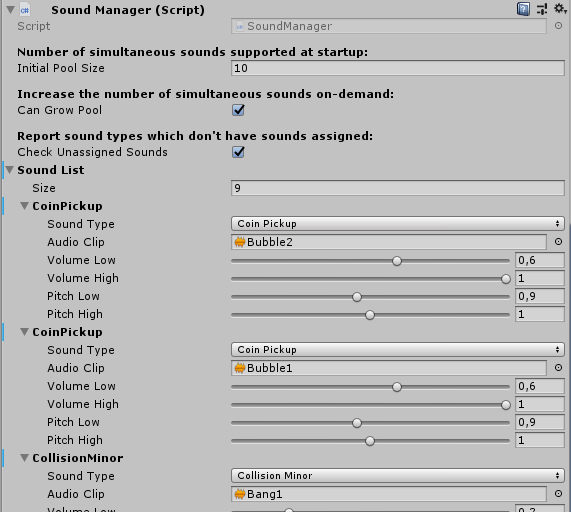 Pretty much everybody uses some sort of audio or sound manager, from what I’m aware of. But if you’re not sure what’s the point:

Just for illustrative purposes, because it’s really obvious and straightforward to use.

(Note that the callback shown is obviously available as an optional parameter on all of the method overloads, not just on the longest. Also note that there is an overload for setting pitch and volume override for the simple PlaySound() method too.)

What this component doesn’t have

Let me know if you happen to find any bugs, or spot any sort of weirdness with the code. I’m coming from normal .Net development, so I can’t rule out the possibility that I’m unaware of some weirdness in how Unity handles lifecycle of objects, coroutines, or who knows what.

Since it seems some people are using this, and actually someone asked me earlier about the licence… I added a permissive MIT licence for your peace of mind.

Show all projects by baratgabor