a grab-bag of attributes, extensions, utilities, etc... that can help you jumpstart your Unity projects and prototypes

This is a grab-bag of attributes, extensions, utilities, etc… that can help you jumpstart your Unity projects and prototypes. I use them for my own Unity projects, so you can expect this to be maintained as long as I use Unity.

If you want to use Unity with git, you’ll need to change your initial project settings as follows: 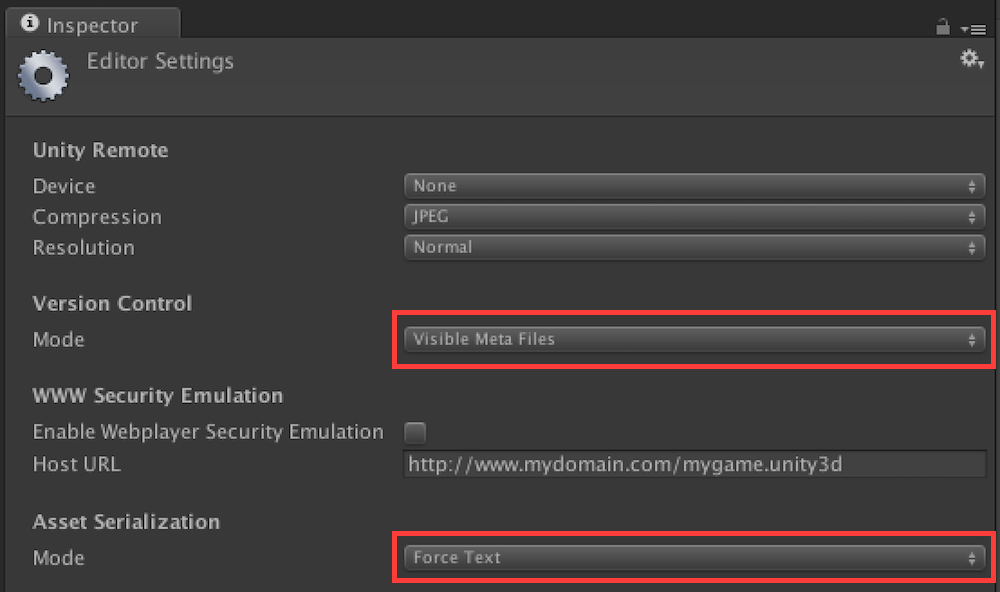 Force Text ensures that Unity’s assets (prefabs, scene files, etc…) are stored as plain text instead of binary, which is the default. Doing this makes it possible for git to merge changes from multiple contributors. It should also reduce the eventual size of your repository, because git stores changes to files as deltas, and binary deltas generally can’t be compressed very well.

When Force Text is active, Unity saves your assets as YAML, which is “a human friendly data serialization standard for all programming languages.”. YAML is similar to JSON but relies on indentation instead of block symbols.

Unity identifies objects using identifiers called guids. It uses these identifiers for lots of things, including keeping track of which prefabs are part of each scene and what components are attached to which game objects. Unity stores these guids in .meta files, so it’s essential that you keep these files versioned along with your code.

Don’t forget: use File -> Save Project to save these settings

Adding this to your project will add Edit -> Generate Gitignore File to the Unity menu, which will create a Unity-specific .gitignore file outside of your Unity project folder. The generated file will tell git to ignore the Unity/OS files that shouldn’t be version controlled (for example, Unity’s Temp and Library folders).

Here’s how your directory structure should look:

This is useful if you use Sublime Text 3 to edit your code. It assumes that you have the OminSharp plugin installed in Sublime. Putting this generator in your project will add Edit -> Generate Sublime Project File to the Unity menu, which will create an OmniSharp-specific *.sublime-project file outside of your Unity project folder.

Here’s how your directory structure should look:

Unity internally refers to Animator entities by int hash codes, but its API for getting them makes animation code verbose and brittle. Putting this generator in your project will add Edit -> Generate UnityAnimationConstants.cs to the Unity Menu, which will prompt you for a save location and then create UnityAnimationConstants.cs there. The file will contain a unique namespace for each *.controller file in your project, with an associated Parameters static class. You can then do the following:

You’ll need to use the menu item again if you change your animator controller parameters.

Unity provides ExposedAudioParameters for runtime audio manipulation. However, the API for accessing these parameters is brittle; it relies on strings, introducing the potential for runtime errors. Putting this generator in your project will add Edit -> Generate UnityAudioConstants.cs to the Unity Menu, which will prompt you for a save location and then create UnityAudioConstants.cs there. The file will contain a unique namespace for each *.mixer file in your project, with an associated ExposedAudioParameters static class. You can then do the following:

You’ll need to use the menu item again if you change your exposed audio parameters.

Unity’s API for layers, scenes, and tags rely on strings and ints. If you mistype a string or change a number, you’ll get an error at runtime. Putting this generator in your project will add Edit -> Generate UnityConstants.cs to the Unity Menu, which will prompt you for a save location and then create UnityConstants.cs there. The file will contain a UnityConstants namespace with static classes containing constants for your tags, levels, and layers.

You’ll need to use the menu item again if you change your tags, levels, or layers.

NOTE: I’m considering making MathHelpers extension methods of Mathf or creating partials so that you can pick which functions to include by adding one file per set of related functions

MathHelpers.cs is a static class that provides common math functions Unity doesn’t include by default. These include:

These functions make it easy to linearly map an input range to an output range. This is especially useful for animation code.

Modulus that makes negative n positive if m is positive. This is useful for indexing into arrays with negative numbers.

Each Attribute comes in a self-contained folder including an attribute and a corresponding PropertyDrawer.

This attribute allows you to specify limits for your AnimationCurves so that you can’t accidentally make them extend beyond the desired limits in the inspector. For example:

TODO: Describe the other attributes

These will allow you to use interfaces to write swappable components, leading to reusability and reduced coupling. Note that methods like GetComponent<> and GetInterface<> allocate memory on the heap, so try to cache the results where possible. You don’t want GC spikes!

Depends on Scripts/CodeHelpers/MathHelpers for Mod.

Implement ISegmentsProvider on a component that provides a set of 3d segment positions and tangents. You can then use TubeRenderer to extrude a tube mesh with desired resolution along the provider. TubeRenderer computes the parallel transport frame as described here, which makes it robust to kinks and artifacts you might otherwise see with a naive extrusion implementation.

Implements ISegmentsProvider. Use it as the basis for curved paths or in conjunction with TubeRenderer.

Unless otherwise indicated in the source files, all assets are provided under the terms of the MIT open source license.

Show all projects by jceipek