UberAudio is a free, open-source extension of Unity’s audio system. It organises all your audio into banks, rather than scenes or prefabs, and audio is triggered through a flexible, loosely coupled interface.

Although rewritten for Unity, this is the same system we used on Dungeon Keeper and Fable.

There’s also an example project that shows you how to use things.

An ‘audio event’ is a unit of audio which can be triggered through AudioManager.Instance.Play(). Audio events are created and stored in ‘audio banks’, which are mounted in your scene through an AudioBankMounter.

There are various advantages to organising things in banks:

To trigger an audio event in a bank you simply call ‘AudioManager.Instance.Play()’ with the name of the event you want to trigger. If such a trigger isn’t found, nothing is played.

In addition, event triggers can be specialised. An example helps to explain how this workds and why it’s useful.

Imagine a game in which you have lots of different creature types, each with their own type name stored in ‘CreatureName’, and you want to give one of them a unique footstep sound. Obviously, using the normal event triggers, you could fire off an audio event trigger of ‘CreatureName+“Footstep”’. However, that would mean creating a new trigger in your bank for all of your creatures, with most of them having the same settings. This is clearly inefficient.

Trigger specialisation solves this common problbem. In your audio bank you create two audio events, one for the general case and one for your special case - so “Footstep” and “Wolf:Footstep”. In code you fire off 'CreatureName + “:” + “Footstep” - the ‘:’ is a special seperation marker.

Now, when CreatureName is ‘Wolf’ we’ll have an event trigger of 'Wolf:Footstep and there’s an exact match for that, which will be played. However, when you fire off “Goblin:Footstep”, it won’t find anything; it then strips off the first specialisation on the left (‘Goblin’ in this case), and tries again, this time finding Footstep. Footstep is played, giving you a default sound.

This system works for any number of specialisations, working from left to right. Thus things ‘Wolf:Gravel:Footstep’ might be used if you have different sounds for ground materials.

This is a very handy workflow. It means coders can programmatically fire off very specific events to the audio system, and audio designers can quickly create defaults for the most common cases and create more specialised versions when needed.

Multiple event triggers with the same name are automatically grouped together in UberAudio, creating a trigger group. When an audio event trigger from a group is played, it will pick a random entry from the group. By default, all events are given the same weighting in the randomisation, but if you wish you can weight a given event higher or lower by changing its weighting in the audio bank.

This allows audio designers to create variations for audio quickly and easily.

When you fire off an audio event in UberAudio, if you want a 3D sound the second parameter to Play needs to be a GameObject. Any audio triggered by your event then tracks the position and lifetime of that GameObject.

Unlike raw AudioSource playback in Unity, however, by default your audio will not immediately die as soon as the GameObject it’s attached to dies - this is rarely desireable. Instead, it will finish its playback and then die; if it’s a looping sound, it will release it’s loop and then die.

This behaviour can be overridden in the properties mask of an event in the audio bank.

Editing audio banks is fairly simple. Below is a screenshot of what it looks like: 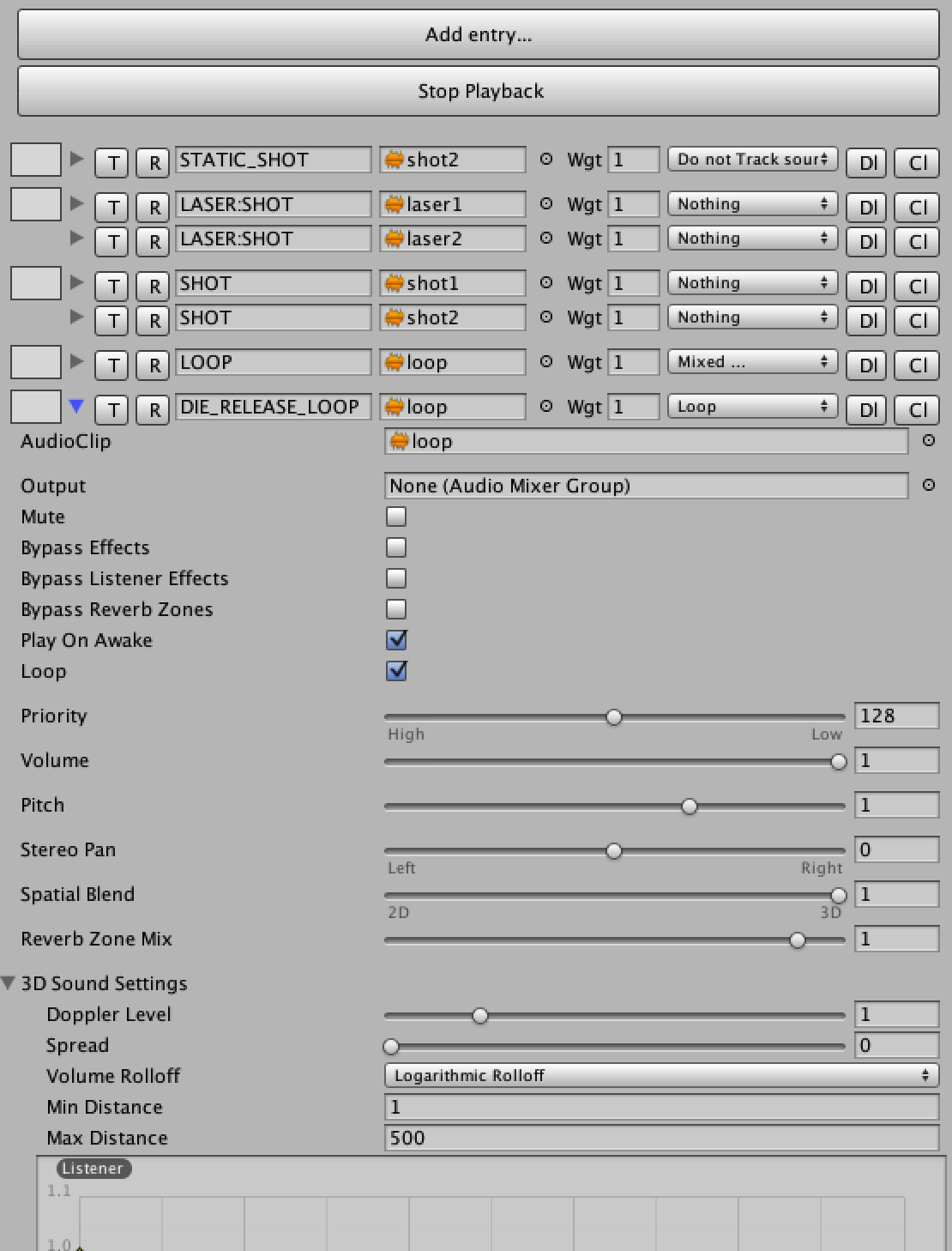 From left to right, we’ve got:

Show all projects by bbbscarter