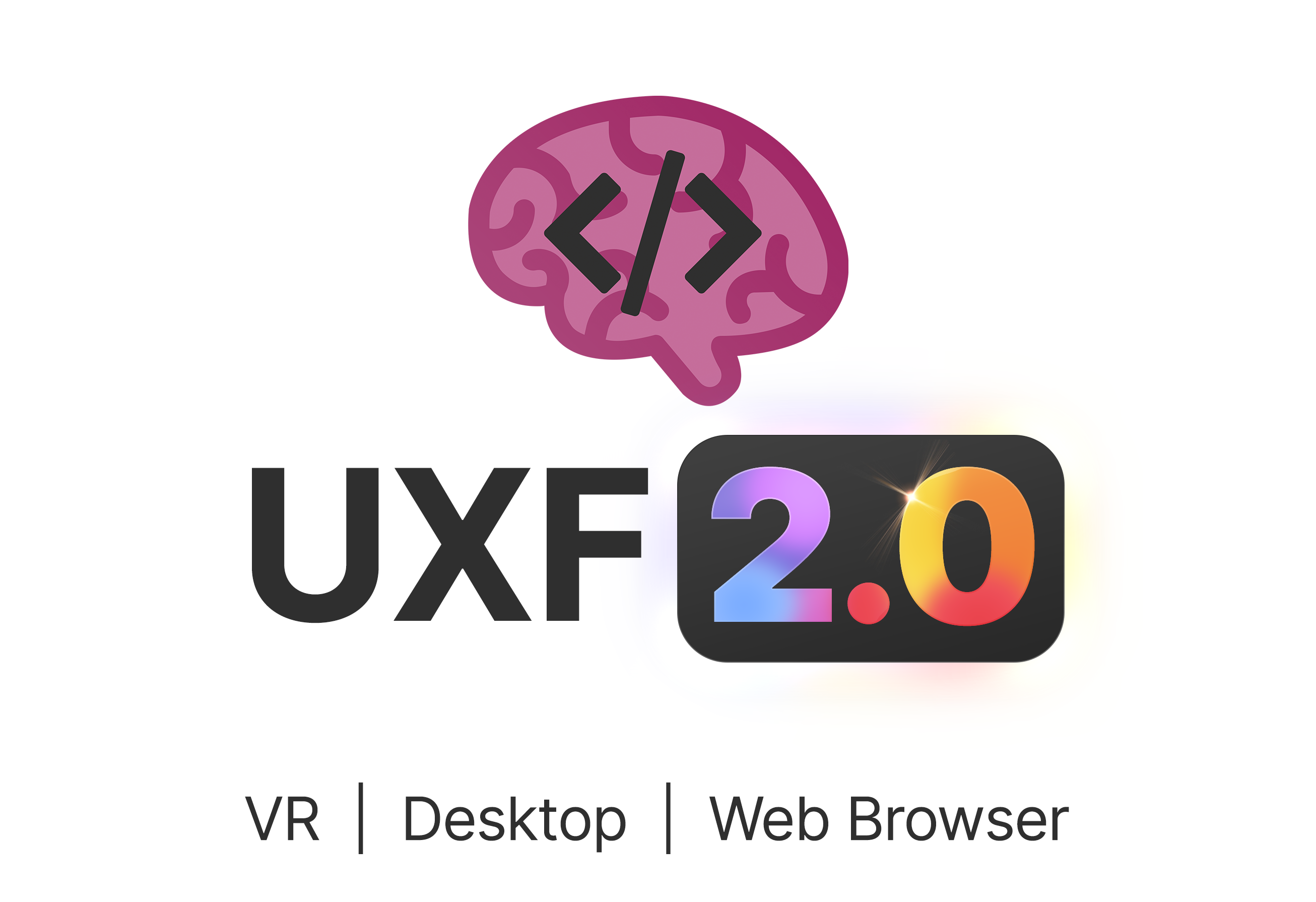 A set of components which simplify human behaviour experiments developed in the Unity engine. UXF 2.0 supports experiments for VR, Desktop, as well as Web based experiments for full remote data collection, with different data output modes. This is the development project, if you want to download the package, do not clone this repository, see “Get Started” below.

Read the open access paper in Behavior Research Methods! The paper is now slightly out of date but gives a good overview of the motivation of this project. Developed by Jack Brookes, Immersive Cognition Group, University of Leeds.

If you have developed a project using UXF please let me know!

Click the banner above to see some of our experiments that have been built with UXF.

Visit the Wiki for more details.

UXF automates the process of collecting data. How the data are stored depends on the platform (PC, Web, etc) as well as your configuration of different “Data Handlers”. For PC platforms, you probably just want to store data in files on the PC locally. In that case, the File Saver data handler will output data in several forms:

Behavioural data are collected with 1 row per Trial, and automatically records some values such as the timestamp of the start and end of the trial. Developers can easily record observations of any type and associate them with a trial. Data is output with one row per trial in a results csv file.

Continuous data are data that are measured continuously over time during a trial. The main use case of this is to track the position and rotation of any object in the scene, which is captured at whatever frame rate the application is running at (in the Update() loop) by adding a PositionRotationTracker component to a GameObject. This can be used to track positions of user controlled objects (such as hands or head in a virtual reality application) or an arbitrary object in the scene (e.g. some kind of stimuli). However this system is generic and developers can create their own Tracker classes that perform measurements of any variable during trials.

Data is stored in CSV files with automatic handling of file & directory naming.

UXF also stores other data in the form of .csv & .json files (full details on the Wiki). Running a session with UXF will result in several forms of data being stored:

Example Output You can see an example of the data structure UXF outputs in the example_output folder of this repository.

For Web platforms, the data cannot be stored on the participant’s PC. Instead, data can be uploaded to a database. UXF handles all of the hard work for you and automatically uploads the data files as long as you set up a DynamoDB database using Amazon Web Services.

A UnityEvent is invoked on Trial begin and end, allowing you to easily trigger presentation of stimuli at trial start (for example).

A customisable user interface is optionally available to collect demographic data and present instructions to the user or experimenter. Variables that are collected are customisable and can be used in the experiment (e.g. a parameter for a participant’s age could be used to change the difficulty of the experiment). 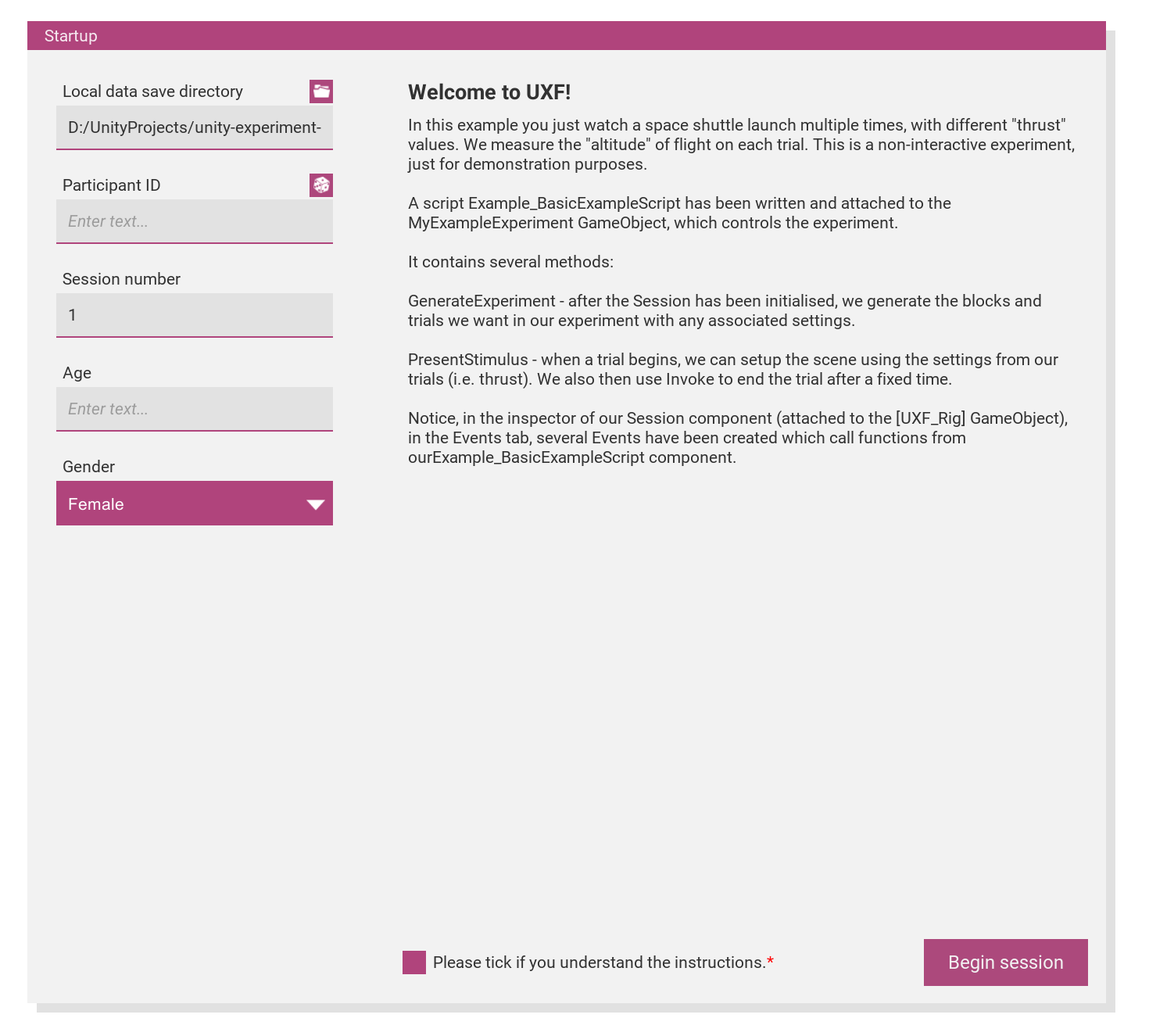 More examples are contained in the package and on the Wiki including a full written tutorial.

This project is developed under Unity 2018.4 LTS but should work on all recent versions of Unity. Tested and working on Unity 2018 & 2019 LTS.

Visit the Wiki for full documentation.

Tutorial: Building an experiment with UXF

A full tutorial for building an experiment with UXF is available here.

Show all projects by immersivecognition